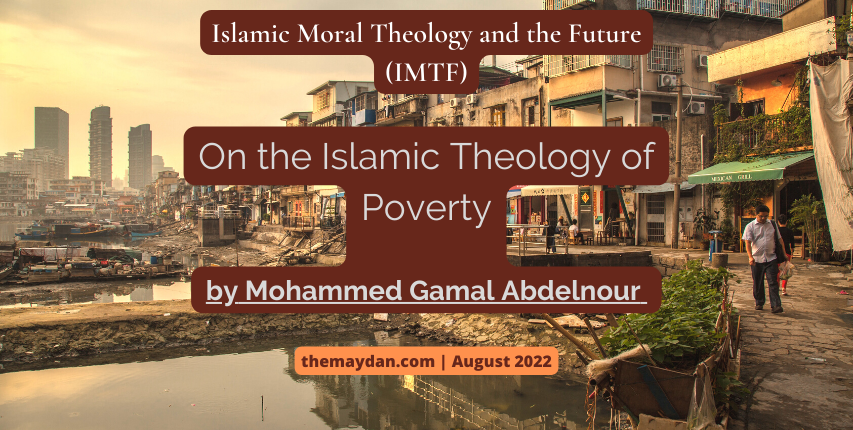 This essay is part of the Islamic Moral Theology and the Future (IMTF) Project, generously supported by the John Templeton Foundation, and co-led by Maria Dakake and Martin Nguyen. It is specifically part of the roundtable discussion that is responding to Nguyen's second lead essay for the project. See Dakake's second lead essay for a parallel line of inquiry. Click here to read all past contributions to Dakake and Nguyen's respective lines of inquiry.

In my previous essay I explored how the Islamic tradition lends itself to multiple interpretations regarding the Islamic theology of poverty. While there are traditions that endorse the acquisition of wealth and praise richness, there exist other traditions that seem to lend support to the opposite view. That essay demonstrated this through the examples of ʿUthmān b. ʿAffān (d. 656) and ʿAbdur-Raḥmān b. ʿAwf (d. 654) who were successful merchants in the time of Prophet Muhammad, especially in comparison to the famously austere Abū Dharr al-Ghifārī (d. 652) who is often associated with early Islamic socialism. Drawing on al-Ghazālī’s Iḥyā’ ʿulūm al-dīn, the essay pointed out how al-Ghazālī takes a teleological approach to the Islamic theology of poverty, privileging poverty inasmuch as it does not distract the journey of the faithful to God. In this second essay responding to Martin Nguyen’s line of inquiry, I will attempt to address some of the questions that al-Ghazālī left unanswered, most notably the ontological question as to whether or not Islam, at essence and irrespective of the “instrumental function of poverty and wealth,” privileges one over the other. While the previous essay drew heavily on al-Ghazālī’s Iḥyā’ ʿulūm al-dīn, this essay will engage chiefly with the Qur’ān and the Hadith.

In this second essay…I will attempt to address some of the questions that al-Ghazālī left unanswered, most notably the ontological question as to whether or not Islam, at essence and irrespective of the “instrumental function of poverty and wealth,” privileges one over the other.

At first glance, the Qur’ān sometimes views wealth as a form of lust and a means of delusion, while at other times it views it as a blessing. With respect to the former, Q. 3:14 says, “The love of desirable things is made alluring for men– women, children, gold and silver treasures piled up high, horses with fine markings, livestock, and farmland– these may be the joys of this life, but God has the best place to return to.”[1] In contrast, Q. 4:5 views wealth positively, stating, “Do not entrust your property to the feeble-minded. God has made it a means of support for you: make provision for them from it, clothe them, and address them kindly.” Furthermore, it tells the believers that God will enrich them, if He wishes. The verse states, “If you are afraid you may become poor, [bear in mind that] God will enrich you out of His bounty if He pleases: God is all knowing and wise.”

In comparison to the Biblical tradition, which says, “it is easier for a camel to go through the eye of a needle than for someone who is rich to enter the kingdom of God,”the Islamic tradition seems sanguine about wealth on the whole. Q. 7:32 put this clearly, when it says, “Say [Prophet], ‘Who has forbidden the adornment and the nourishment God has provided for His servants?’ Say, ‘They are [allowed] for those who believe during the life of this world: they will be theirs alone on the Day of Resurrection.’ This is how We make Our revelation clear for those who understand.”

In accord with the Qur’an is the Sunnah. ʿAmr b. al-ʿĀṣ (d. 664) narrated that the Prophet sent for him, commanding him to pack his clothes and arms and to go to him. ʿAmr said: “I did what he asked and came to him while he was performing ablution. He looked at me from head to toe then said: ‘O ʿAmr, I want to send you in charge of an army so that God will bless you with spoils, and I will give you your lawful share of the spoils.’ I said: ‘I did not become Muslim in pursuit of wealth; I became Muslim out of the desire for embracing Islam so that I would be with the Messenger of God’ He said: ‘O ʿAmr! How excellent lawful wealth is in the hands of a righteous person!”[2] This hadith may well serve as fundamental principle and a general rule establishing that Islam privileges wealth to poverty when they are used in the right place. Another Hadith that lauds wealth when it is lawfully earned and rightfully spent is the following, narrated on the authority of Abū Saʿīd al-Khudrī (d. 693), whereby the Prophet is reported to have said: “No doubt this wealth is sweet and green. Blessed is the wealth of a Muslim from which he gives to the poor, the orphans and to needy travellers.”[3] This part of the hadith shows how wealth is an excellent means for a Muslim to fulfil the due rights over him, embodied in upholding the ties of kinship, alleviating the destitute, and sparing oneself from the humiliation of begging for money. Another hadith further affirms that wealth in the hands of a righteous Muslim is the best state for a Muslim. It is worth quoting the hadith at its entirety here:

In comparison to the Biblical tradition, which says, “it is easier for a camel to go through the eye of a needle than for someone who is rich to enter the kingdom of God,”the Islamic tradition seems sanguine about wealth on the whole.

In his Poverty and Charity in Medieval Islam (2008), Adam Sabra shows that early Muslim scholars believed self-denial to be inconsistent with the Qur’ānic admonition against those who would forbid the good that God has put in this world for his people to enjoy, as accentuated in Q. 7:32. However, in light of the flood of wealth in the post-Muhammadan era, scholars began to idealize those who abandoned material wealth in order to pursue full-time dedication to God and therefore encouraged voluntary poverty. They also began to chiefly view wealth as a form of fitna (temptation).

Islam did not only view wealth positively but it also showed the way to become wealthy. The Qur’ān encouraged “work” and repeatedly linked doing good work to having good faith in God. Furthermore, it advised against wastefulness, as stated in Q. 7.31, which says, “Children of Adam, dress well whenever you are at worship, and eat and drink [as We have permitted] but do not be extravagant: God does not like extravagant people.” See also Q. 17:26-29, stating, “Give relatives their due, and the needy, and travellers– do not squander your wealth wastefully: those who squander are the brothers of Satan, and Satan is most ungrateful to his Lord– but if, while seeking some bounty that you expect from your Lord, you turn them down, then at least speak some word of comfort to them. Do not be tight-fisted, nor so open-handed that you end up blamed and overwhelmed with regret.”

Despite the fact that Islam at essence, as I argue, privileges wealth and richness over poverty, it still sees some material and spiritual value in poverty.

Despite the fact that Islam at essence, as I argue, privileges wealth and richness over poverty, it still sees some material and spiritual value in poverty. Q. 42:27 points out that God may well afflict certain individuals with poverty by way of deterring them from having the means to strike corruption on earth. Q. 42:27 says, “If God were to grant His plentiful provision to [all] His creatures, they would act insolently on earth, but He sends down in due measure whatever He will, for He is well aware of His servants and watchful over them.” Sūrat al-Layl (The Night) accentuates the gravity of the affliction when wealth and property are in the hands of a corrupt person, stating, “There is the one who gives, who is mindful of God, who spends for the cause of God,–– We shall smooth his way towards ease. There is the one who is miserly, who is self-satisfied, who denies goodness–– We shall smooth his way towards hardship and his wealth will not help him as he falls” (Q. 92: 6-11). Money in the hands of someone who withholds the rights of God over his wealth is a destructive tool that ultimately incurs one’s own destruction and a means of causing mischief on earth. Such a person may also combine the sin of acquiring wealth unlawfully with that of wastefulness, as indicated in Q. 43:32, which states that the good functioning of the world requires variation in people’s economical ranks, so that they may well be in constant need of each other’s services. The verse states, “We are the ones who give them their share of livelihood in this world, and We have raised some of them above others in rank, so that some may take others into service.” The Qur’ān gives the example of Korah, who was advised with following Qur’ānic message, in Q. 28:28, “Seek the life to come by means of what God has granted you, but do not neglect your rightful share in this world. Do good to others as God has done good to you. Do not seek to spread corruption in the land, for God does not love those who do this.” However, Korah never took heed and instead wronged his people by engaging in usury and then claiming that he had earned his wealth exclusively by means of his knowledge. He came to ruin and his wealth could not save him. Therefore, in such situations, poverty would have been a better state than wealth.

In the economy of spirituality, Q. 2: 155-157 clarify that poverty teaches patience and forbearance, which are essential qualities to one’s spiritual journey towards God.

In the economy of spirituality, Q. 2: 155-157 clarify that poverty teaches patience and forbearance, which are essential qualities to one’s spiritual journey towards God. The verses state, “We shall certainly test you with something of fear and hunger, and loss of property, lives, and crops. But [Prophet], give good news to those who are steadfast, those who say, when afflicted with a calamity, ‘We belong to God and to Him we shall return.’ These will be given blessings and mercy from their Lord, and it is they who are rightly guided.”

Taken together, the above traditions indicate that self-invited poverty (or giving up pleasures) is not the same as poverty caused by economic imbalance, and that Islam is primarily against imposed and unjust poverty. Even though Islam generally considers wealth as a blessing, it does not praise wealth in an absolute sense. That is, the means by which people acquired wealth, as well as what they do with it matter. Whoever pursues lawful wealth with the intention of providing for himself, his dependants and improving the world by investing and spending it on what is good and beneficial to the individual and community, then how excellent wealth is for him! On the contrary, wealth in the hands of those who accumulate it for selfish purposes is a means of destruction and evil.

Mohammed Gamal Abdelnour is a tenured faculty member at Al-Azhar University, Cairo and a postdoctoral research associate at the University of York. He researches and publishes on Islamic theology and comparative religion. He is the author of A Comparative History of Catholic and Ashʿarī Theologies of Truth and Salvation (Brill, 2021) and a forthcoming monograph with Oxford University Press, entitled: The Higher Objectives of Islamic Theology: Towards a Theory of Maqāṣid al-ʿAqīda. Gamal is currently working on a project in comparative analytic theology, funded by the Templeton Foundation.

[1] Translations here are taken from Abdel Haleem, M. A. S. (2004). The Qurʾan: A New Translation (Oxford: Oxford University Press), unless otherwise is stated.