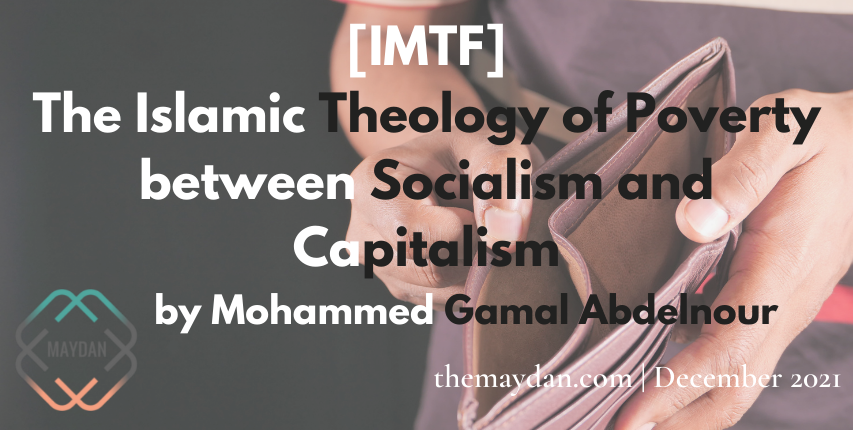 In The Protestant Ethic and the Spirit of Capitalism, Max Weber argued that it was the Protestant religious ethic, more particularly Calvinism, that acted as a precursor to modern Capitalist economic development, as it saw a moral and a spiritual significance to wealth.[1] Luther’s notion of a “calling,” argued Weber, encouraged the faithful to work hard “for God” and to be successful in businesses for His sake, since simply being a member of the Church was not enough for one to gain salvation.[2] Therefore, instead of being motivated to pursue wealth by an ethically-questionable sense of “greed,” the faithful now justified pursuit of profit with their own faith. On the contrary, Catholicism, Weber argued, lacked an affinity towards entrepreneurial activities by virtue of its ethic of poverty, which had historically been accompanied by the rejection of economic pursuit.[3] While Weber also included some fragmented observations about Islam arguing that it too does not have an affinity towards Capitalism due to its “warrior” nature and economically irrelevant understanding of salvation,[4] Islam’s relation to such questions remains a moot point. His reflections, however, act as a useful starting point for this piece, which aims to offer some analytical insights into the classical Muslim discussions on such questions, with a view to offering a more critical assessment of these discussions in another blog.

“O Allah, I seek refuge in You from disbelief and poverty” is a Prophetic prayer that is often invoked by Muslims to emphasize that Islam views faqr “poverty” in a negative light. However, exploring the Islamic tradition shows that this is only one side of the coin, for there exists other traditions that seem to lend support to the opposite view. Both narratives have resonances within the Islamic tradition. The successful merchants ʿUthmān ibn ʿAffān (d. 656) and ʿAbdur-Raḥmān ibn ʿAwf (d. 654) are often invoked as early examples of Islamic Capitalism, whereas the famously austere Abū Dharr al-Ghifārī (d. 652) is often associated with early Islamic Socialism.[5] All three, however, are widely revered figures within Sunni Islam. This polarity implies that Islam lends itself to various interpretations in the realm of economics and financial ethics.

In his Iḥyā’ ʿulūm al-dīn (The Revival of Religious Sciences), Abū Ḥāmid al-Ghazālī (d. 1111) argued that Muslim scholars disagreed on the question of whether wealth was better than poverty. While the vast majority, most notably Abū’l-Qāsim al-Junayd (d. 910) and Ibrāhim al-Khawwāṣ (d. 904), favoured poverty over wealth, Abū al-Abbās ibn ʿAṭā’ (d. 922) said: “A wealthy man who is thankful and who upholds God’s right [over his wealth] is more virtuous than the poor who is patient.”[6] However, al-Ghazālī himself sided with the former, contending that “when poverty and wealth are taken generally, the one reading the scriptural reports and traditions will have no reservations about the privileging of poverty.”[7]

Al-Ghazālī then extensively explained the view of Ibn ʿAṭā’ before questioning its premises. He stated that Ibn ʿAṭā’ might have thought that the wealthy individual is better than the poor one by virtue of the former’s potential to draw near to God through his charitable works, works which the poor individual is often incapable of rivalling. Ibn Ata’, said al-Ghazālī, might also find support in the scriptural report whereby the poor complained to the Prophet that the rich were far ahead in attaining good deeds (due to their ability to pray and fast like the poor do, and give plentiful charity on top of that). In response, the Prophet taught them certain prayers with which they could get more reward than the wealthy. Learning of those prayers, the wealthy took to uttering the prayers. Consequently, the poor returned to inform the Prophet that the wealthy have now similar access to those prayers. However, this time the Prophet had nothing to say but: “Such is God’s favour which He gives unto whom He will.”[8] Ibn Ata’ also argued that wealth is privileged over poverty, for “self-sufficient” (ghanī) is an epithet of God, whereas its opposite is not true of Him. The implication is that had poverty been a positive quality, God would have used it as an attribute of His.

Unconvinced by those arguments, al-Ghazālī engaged in a point-by-point refutation of Ibn ʿAṭā’. Refuting the first argument, al-Ghazālī contended that the tradition quoted by Ibn Ata’ has a more extensive narration to it, pointing to the contrary interpretation, whereby the poor’s reward for their prayers is above that of the well-off. The narration goes: “The poor sent a messenger to the Prophet who said to him, “I am the messenger of the destitute to you.” The Prophet said: “Welcome to you and to all whom you represent. You have come from a people I love.” When the messenger repeated the aforementioned complaint, the Prophet said to him: “From me convey to the poor, ‘Whoever among you is patient awaiting the reward from God has three traits which the well-off do not share. In Paradise there are chambers to which the residents of Paradise look up, just as the residents of earth look up to the stars of heaven. None but a destitute prophet, destitute martyr or destitute believer may enter them. Secondly, the poor shall enter Paradise before the rich by a half-day, that is five hundred years. Thirdly, when the rich glorify God, and the destitute do the same, even if the rich were to spend 10,000 dirhams, they would not overtake the poor. The same holds for every righteous act.” When the messenger returned to inform them, they said: “We are content, we are content.”’[9] As for the second argument, al-Ghazālī mentioned that a scholar already rebutted this claim, saying to Ibn ʿAṭā’, “Do you consider God Exalted ‘self-sufficient’ by virtue of means and accidents?” That is, God’s self-sufficiency has nothing to do with the sense of human self-sufficiency. Ibn ʿAṭā’ is reported to have withdrawn and said no more.[10]

“Even though al-Ghazālī sided with the view that privileged poverty, he pointed out that both parties have arguments based in scripture, leaving us with not only indecisive conclusions, but also contradictory inferences.”

Even though al-Ghazālī sided with the view that privileged poverty, he pointed out that both parties have arguments based in scripture, leaving us with not only indecisive conclusions, but also contradictory inferences. Exposing the contradictory nature of such conclusions, al-Ghazālī showed that just as the claim of one who deems “wealth” laudable inasmuch as it is a trait of God can be refuted through the argument from “pride,” so too the claim of one who castigates “wealth” because it is an attribution of the servant can be rebutted by the argument from “knowledge” and “power.” That is, “the latter are attributed to the Lord, while ignorance and incapacity are the servant’s. Yet no one prefers heedlessness and incapacity to knowledge and power.”[11] Therefore, Ibn ʿAṭā’’s analogy is inconsistent.

Having exposed such inconsistencies, al-Ghazālī offered his readers a rule of thumb, arguing that “what is not intended for its own sake but for the sake of something else has to be related to its purpose, thanks to which its [distinct] merit (faḍl) comes to light.”[12] For instance, the universe is not intrinsically blameable, but it is only blamed because it is often an impediment to reaching God. Similarly, poverty is not intrinsically privileged, but we privilege it because in it often lies the removal of the impediment to God and the absence of what distracts one’s journey to Him. Indeed, many a well-off was not distracted from God by his wealth, most notably Solomon, ʿUthmān ibn ʿAffān, and ʿAbdur-Raḥmān ibn ʿAwf. Similarly, many a destitute was distracted from God by poverty. Be that as it may, the uppermost aim of the faithful is the “love of God,” which can only transpire after coming to know Him. It is impossible to pursue the path of “knowledge” while one is distracted. In this, poverty can be as distracting as wealth. In an insightful passage, Al-Ghazālī shows that the real distraction is neither poverty not wealth per se, but rather the “love of this world,” as the love of God can never coexists with it in the faithful’s heart:

Someone who loves a thing is preoccupied with it, whether he is separated from or united with it. His preoccupation might be the greater upon either his separation or union. The world is the darling of the heedless. The one deprived of it is absorbed in its quest; while the one who possesses it is absorbed in preserving and enjoying it.[13]

Al-Ghazālī then advises readers to be like people who have little interest in worldly possessions such that these possessions are like water to them—once they fulfil their basic need of it, its absence and presence are of equal worth. Namely, “neither benefits from it except in proportion to need. Now, the existence of the proportion to need is better than its removal, because the famished person is on course to death, not knowledge [of God].”[14] In a similar vein, once one’s wealth is above a certain threshold of basic need, then the destitute is less vulnerable, since the trials of well-being are more severe than those of ill-being. This is why, al-Ghazālī argued, the Companions of the Prophet said, “When the trial of adversity befell us, we endured. But when the trial of well-being befell us, we could not.”[15] Al-Ghazālī argues that such is the character of all humans, i.e., they exceed all bounds when they judge themselves to be self-sufficient, excepting those singular individuals who are only rarely found in any given generation. Notwithstanding, the Islamic revelation is concerned primarily with the “average” rather than those “exceptions,” and adversity is, by and large, more fitting and beneficial for the “overwhelming majority” of people in terms of their relation to God. Therefore, al-Ghazālī concludes, the Islamic revelation generally reproves wealth and approves of poverty.[16]

“…al-Ghazālī takes a teleological approach to the Islamic theology of poverty, privileging poverty inasmuch as it does not distract the journey of the faithful to God. However, al-Ghazālī leaves us with some important questions unanswered, most notably the ontological aspect of the discussion…”

As we may surmise, al-Ghazālī takes a teleological approach to the Islamic theology of poverty, privileging poverty inasmuch as it does not distract the journey of the faithful to God. However, al-Ghazālī leaves us with some important questions unanswered, most notably the ontological aspect of the discussion, meaning, whether Islam, at essence and irrespective of the “instrumental function of poverty and wealth,” privileges one over the other. This is what I shall aim to investigate in my subsequent piece, primarily asking: Does Islam essentially, as compared to teleologically, privilege poverty over wealth? If so, how does this influence the spiritual and social realities of Muslim communities? What do modern Muslim theologians have to say on such questions?

Mohammed Gamal Abdelnour is a tenured faculty member at Al-Azhar University, Cairo and a postdoctoral research associate at the University of York. He researches and publishes on Islamic theology and comparative religion. He is the author of A Comparative History of Catholic and Ashʿarī Theologies of Truth and Salvation (Brill, 2021) and a forthcoming monograph with Oxford University Press, entitled: The Higher Objectives of Islamic Theology: Towards a Theory of Maqāṣid al-ʿAqīda. Gamal is currently working on a project in comparative analytic theology, funded by the Templeton Foundation.

Madelung, Wilferd. 1997. The Succession to Muhammad: A Study of the Early Caliphate. Cambridge: Cambridge University Press.