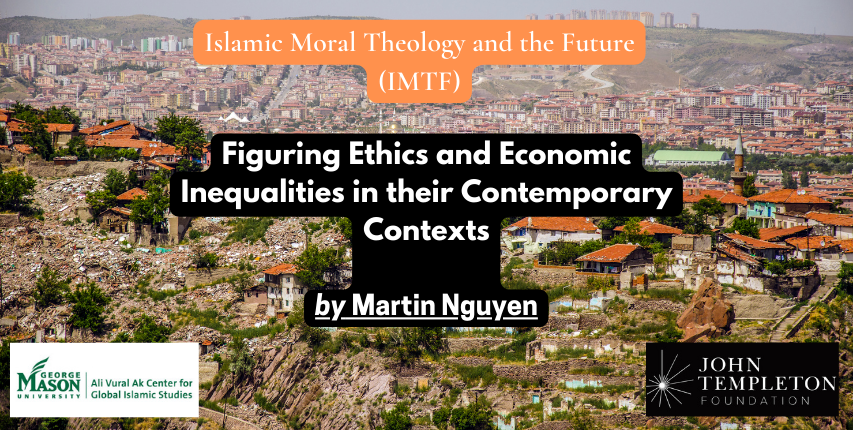 This essay is part of the Islamic Moral Theology and the Future (IMTF) Project, co-led by Maria Dakake and Martin Nguyen. Click here to read past contributions to Dakake and Nguyen's respective lines of inquiry.

Over the past six months, the IMTF online roundtable discussion has brought together a number of Muslim voices to explore the area of inquiry concerning Islamic virtues of the self, specifically with regards to their relevance for understanding and confronting the economic inequalities of the present. The concept of faqr or “poverty,” taken as both virtue and vice, served as our common entry point of reflection. Specifically, what does the Islamic tradition, in its historic and ongoing engagement with “poverty,” offer persons of faith seeking to navigate, engage, and challenge the prevailing matrix of economic inequalities that we presently face?

The first two contributors offered insightful explorations into the conceptual histories behind poverty. Drawing upon al-Ghazālī’s (d. 505/1111) famous work Revival of the Religious Sciences, Mohammed Gamal Abdelnour explored how the spiritual masters of the Islamic tradition conceptualized and compared the religious merits of poverty and wealth before delineating al-Ghazālī’s own theology of poverty. Sami al-Daghistani turned more broadly to “the foundations of premodern Islamic economic thought” by surfacing both the historical developments guiding its formation and the Divinely disclosed, but humanly interpreted moral cosmology upon which it was built. As his contribution revealed, the scholars of the tradition understood a range of virtues – like ʿadl (justice), zuhd (renunciation), and waraʾ (prudence) – to be operative in balancing matters of material and moral wealth. These windows into the past were instructive, but naturally raised questions concerning their contemporary relevance. Fortunately, it is clear from both contributors that there is more to be said on this front. I look forward in future posts to hearing how they and others can speak more concretely to the challenges raised by our contemporary economic realities.

“Overall, this first round of contributions has allowed us to appreciate the highly textured landscape, so to speak, formed by our present economic realities. Nonetheless, the many points and insights raised thus far could be expanded, challenged, and interrogated further.“

From these abstract, but theoretically rich explorations, the next few contributors situated their respective pieces more clearly in contexts of applicability. In a discerning contribution, Sohaib Khan drew our attention to those Deobandī religious scholars in Pakistan who are increasingly involved with the burgeoning Islamic banking and finance industry. He critically examined how some of these scholars understand, undertake, and promote various modes of religious and ethical formation within the “new capitalist moral economy” of Sharīʿa Compliance. Shifting our attention to South Africa, Goolam Vahed presented an enlightening profile of the relief organization “The Gift of the Givers,” while offering insights into the religious worldview that grounds the organization’s founder Dr. Imtiaz Sooliman. Finally, rounding out our first round of posts was a contribution from Umar Moghul that brought much needed reflection on particular virtues within our modern financial context. His approach, however, was not purely descriptive, but critically attuned. Moghul went on to identify a number of points of tension and divergence between prevailing modern financial mechanisms and the “the wisdom of Divine rulings.”

Overall, this first round of contributions has allowed us to appreciate the highly textured landscape, so to speak, formed by our present economic realities. Nonetheless, the many points and insights raised thus far could be expanded, challenged, and interrogated further. It would be an understatement to say that much more might be said on all of these fronts. As such, many of the questions that I originally raised in my first post, still remain on the table for consideration:

What do these religious virtues and principles [like faqr (poverty) and zuhd (renunciation)] look like against our present economic realities? How are committed Muslims to practice, embody, and live them? What challenges must be identified, named, and confronted? … What shape do these religious ideas take as human-to-human interactions are incrementally obscured by new forms of exchange, consumption, and social interactions? Ultimately, what does it mean for a Muslim today to live faithfully in this materialist world?

“Yet at this juncture, I would like to pose three additional sets of questions for some of our returning voices as well as forthcoming new ones to engage in hopes of refining and facilitating this ongoing roundtable.“

Yet at this juncture, I would like to pose three additional sets of questions for some of our returning voices as well as forthcoming new ones to engage in hopes of refining and facilitating this ongoing roundtable.

In my inaugural post, I alluded to other personal virtues that have been traditionally formulated against perennial questions of livelihood and the rightful acquisition of wealth, like riḍā (satisfaction), qanāʿa (contentment) and tawakkul (reliance). Along with the already introduced faqr (poverty) and zuhd (renunciation or asceticism), the sages and scholars of Islam have typically understood these virtues as part of a broader ethical matrix of engagement aimed at drawing a person of faith closer to God through the disciplining or conditioning of the soul: tazkiyat al-nafs or “the purification of the self.” How this bears upon matters of wealth has often been connected with the following verse of the Qur’an: Take you a charitable offering from their wealth, cleansing them and purifying them thereby, and bless them (Q. 9:103). How might each of these personal virtues, then, be understood in light of broader economic issues like the widening wealth gap, exploitative labor conditions, and widespread poverty? How can the religious teachings and practices of self-purification be made to address these systemic dilemmas within which we seem inextricably mired? What does devotional discipline have to say in the face of structural destitution and economic harm?

“…How might each of these personal virtues, then, be understood in light of broader economic issues like the widening wealth gap, exploitative labor conditions, and widespread poverty?“

Additionally, on a related note, what do Muslim ethical traditions have to say with regards to our materialist cultures of consumption? The COVID-19 pandemic and the subsequent supply chain issues cast a stark light on the perils connected to excessive consumption. While our access to goods may be temporarily disrupted, the jolting slowdown revealed how extensive our advancements in production and logistics have become in recent decades. Items ordered online are expected to arrive at our door in a matter of days, hours, or even minutes. The range of goods and services at our disposal is dizzying: from hot meals and fresh produce to streamed entertainment and rideshares. This vast web of instant gratification only entangles us further in materialism and consumption. Must a radical severing or withdrawal take place in order to disentangle ourselves, or are other possibilities imaginable? How might some of the virtues above, like zuhd (renunciation or asceticism) and riḍā (satisfaction), steer us towards more fulfilling lives of austerity or at least moderation? How are such ideals to be set into everyday practice?

“Must a radical severing or withdrawal take place in order to disentangle ourselves, or are other possibilities imaginable? How might some of the virtues above, like zuhd (renunciation or asceticism) and rida (satisfaction), steer us towards more fulfilling lives of austerity or at least moderation? How are such ideals to be set into everyday practice?“

The ethical discourse around tazkiyat al-nafs or the purification of the self also faces challenges on the technological front. In our increasingly interconnected and technologically integrated world, what does a purified, God-oriented “self” look like? How can our individual selves be disentangled from those aspects of the world saturated by corporate interests – explicitly evident in consumer culture and marketing, implicitly at work through multiple modes of digital integration? For example, what does human agency look like in the face of unseen algorithms designed to alter our behavior, attitude, and choices at a subconscious or unconscious level? How ought the properly “disciplined” or “conditioned” individual be in a world of algorithms and automation where connections and meaning are increasingly found in its virtual interstices?

However our contributors decide to engage with these challenges and questions, I am looking forward to the conversation set to emerge.

Martin Nguyen is Professor of Islamic Studies and Chair of the Religious Studies Department at Fairfield University. His work revolves around Islamic theology and ethics, the Qur’an and its interpretation, Sufism, and the intersection of race and religion. His latest book Modern Muslim Theology: Engaging God and the World with Faith and Imagination (Rowman & Littlefield, 2018) presents a contemporary theology rooted in the practice of the religious imagination. He is also the author of Sufi Master and Qur’an Scholar: Abū’l-Qāsim al-Qushayrī and the Laṭāʾif al-ishārāt (Oxford, 2012), which explores the confluence of Sufism, theology, and Qur’anic hermeneutics in the life and works of an eleventh-century mystic and scholar.