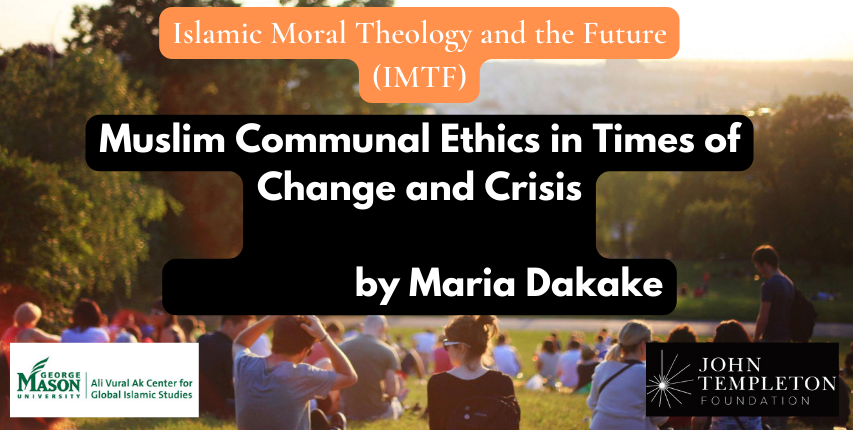 This essay is part of the Islamic Moral Theology and the Future (IMTF) Project, co-led by Maria Dakake and Martin Nguyen. Click here to read past contributions to Dakake and Nguyen's respective lines of inquiry.

In the first set of essays posted for the IMTF online roundtable discussion on communal ethics, I asked scholars and thinkers from Muslim communities in different geographical regions and contexts to address the basic question of “what we owe to others” in our communities, from the perspective of Muslim virtue and ethics. In those essays, penned by Mohammad Hashim Kamali, Ingrid Mattson, Mohammed Hashas, Nora Eggen, and Enes Karić, the authors discussed both the virtue of community, and virtue in community. They emphasized the broad and inclusive nature of iḥsān (virtue, goodness) that the Qur’an and Hadith present as a core duty human beings owe to those around them, and the essential importance of neighborliness, that is, recognizing the obligations imposed upon us by those who live in physical proximity to us. Moreover, these authors made clear that iḥsān and neighborliness were not just values to be practiced within the Muslim community, but rather to be extended to all neighbors, regardless of religious or confessional identity—enjoining not only the responsibility to provide support for one’s neighbors across these divides, but also the responsibility to work with a diversity of people within our communities and neighborhoods toward addressing shared ethical concerns. The authors’ thinking coalesced around these key communal virtues, indicating their centrality and importance in Islamic ethical thinking. But even in Muslim communal contexts, these virtues remain an ideal to strive toward, rather than an assumed reality. This ideal and its attendant values must be continuously remembered and renewed as it faces challenges both from within and without.

“In this next installment of the roundtable discussion on communal ethics, I want to ask some of these same thinkers, as well as some new voices, to think about challenges to the virtuous ideal of community in Muslim ethics.“

In this next installment of the roundtable discussion on communal ethics, I want to ask some of these same thinkers, as well as some new voices, to think about challenges to the virtuous ideal of community in Muslim ethics. I would ask them to consider how Muslim communal ethics are sustained, extended, or made fragile in times of change or crisis, and how these ethical obligations might need to be reimagined or rescaled in light of recent challenges to human sociability and human connections. This next round of essays will take a broad view of the contemporary challenges that face human communal ethics and suggest some ways in which Muslim communal ethics might contribute to addressing them.

While the community, as a whole, ideally serves as a source of moral and material support for all its members, in times of particular need or crisis, smaller “communities within a community” might better or more efficiently serve this function. These smaller communities might be simply a local, physical “neighborhood,”—that is, a community constituted solely by shared space—but they might also be minority religious communities—for example, Muslim communities living in majority non-Muslim societies, or Shi`i minorities within predominantly Sunni contexts. They might be communities that coalesce around a particular Sufi order or mosque or spiritual leader, or they might take the form of women’s or youth groups or social service organizations. Examples of such smaller communities abound in the Muslim world, broadly construed, both past and present. What role can smaller, specialized, more tightly knit or cohesive communities play in seeking to advance the aims of traditional Islamic communal ethics for those who feel disenfranchised or disconnected from the broader societies in which they live?

“While the community, as a whole, ideally serves as a source of moral and material support for all its members, in times of particular need or crisis, smaller “communities within a community” might better or more efficiently serve this function.“

Simultaneously, larger, more homogeneous communities may seek to exclude those who are not considered to share the same values, while some smaller communities within a larger society can manifest an impulse to turn inward, leading them to become disconnected from the larger society around them. Conflicts and differences within a community itself might lead to a breakdown of a broader sense of shared values and ideals. Many societies today find themselves deeply divided over religious, ethnic, ideological, and even moral values. While this is often a primarily political issue, we must ask: are there moral resources within the Islamic ethical tradition that suggest how such differences might be overcome, and social rifts repaired? How can Muslim communal ethics better define the moral commitment one has to neighbors who may not share the same values and beliefs?  Does the ethical responsibility to the neighbor as a fellow human being transcend substantial or irreconcilable differences in certain moral values or positions, even if those are deeply held or religiously rooted?

There is growing evidence that many of the internal divisions challenging communities have been intensified by profound changes in sociability and modes of social interaction in recent years. Obviously, many of our social interactions today take place in a virtual space. Muslim communities have embraced social media and virtual modes of social connection as enthusiastically as other communities. For Muslims, whose sense of forming a single umma has always been challenged by Islam’s vast geographic spread, social media has allowed them to connect to fellow Muslims throughout the globe, as well as to extend their moral and material assistance to other Muslims living at great distance from themselves. In this sense, it could be seen as positively enhancing and expanding intra-Muslim sociability and mutual ethical obligation.

“Can Muslim communal values extend to the virtual world? Have they been weakened by it? Are there Muslim ethical resources that can be drawn upon to confront this challenge that faces not only Muslim communities, but all contemporary communities where virtual networks are widely used?“

However, on social media platforms, unlike in the physical world, we have the ability to select our virtual “neighbors.” While we have, at best, limited control over who our actual physical neighbors or co-workers will be, in the world of social media we can include and exclude whomever we wish; and we dwell more than ever in these virtual neighborhoods. Not only does this create a situation where we rarely have to engage in a substantial way with those who do not share our personal views, but the use of algorithmic tools to shape the content we see on social media sites serves to further select and circumscribe what we encounter and learn about the world outside of ourselves. If this limits our ability to see and interact with the physical world around us in a tangible and organic way, might it skew how our ethical obligations to others, both near and far, are realized and calibrated? Can Muslim communal values extend to the virtual world? Have they been weakened by it? Are there Muslim ethical resources that can be drawn upon to confront this challenge that faces not only Muslim communities, but all contemporary communities where virtual networks are widely used?

Finally, our modes of sociability, both locally and globally, have been deeply impacted by the unprecedented effects of the COVID-19 pandemic. Previous pandemics of a similar scale occurred prior to the development of the highly integrated political and social organization of the modern world that has facilitated the internal lockdowns and the closing of international borders over the previous two years. While these measures have undoubtedly saved many lives (which is the greatest shared concern of all religious ethics, including the Islamic), they have also isolated us from neighbors, co-workers, and even from supportive faith communities—as places of worship, including mosques, cancelled their communal gatherings and rites to protect the health and lives of their congregants. While this isolation forced most people to turn inward and reduce contact with their physical neighbors, it also generated a new set of ethical questions. In a pandemic, the prescribed means of protecting oneself (in this case, quarantine, masking, and vaccines) are also means of protecting one’s neighbors. Given the ethical premium on saving lives in Muslim ethics, how should the obligation to practice precautions that might inconvenience or even potentially harm individuals, or curtail their participation in normally required religious rites, be understood and assessed? On what principles can the personal and communal observation of such precautions be deemed recommended or even obligatory?

“Given the ethical premium on saving lives in Muslim ethics, how should the obligation to practice precautions that might inconvenience or even potentially harm individuals, or curtail their participation in normally required religious rites, be understood and assessed? On what principles can the personal and communal observation of such precautions be deemed recommended or even obligatory?“

Many people today have the sense that the world is engaged in a process of great social change, whose outcome is yet uncertain. Surely, we are not the first generation of people to find ourselves in this position. But just as ethics must be practiced in the communal space in which we find ourselves, it also must be continually reimagined, extended, and reapplied in changing temporal contexts. In this next round of essays, we will explore resources in Muslim communal ethics that might be drawn upon to address the particular challenges of our current moment.

Maria Dakake is Associate Professor of Religion at George Mason University. Dr. Dakake researches and publishes on Islamic intellectual history, Quranic studies, Shi`ite and Sufi traditions, and women’s spirituality and religious experience. She is one of the general editors and contributing authors of the The Study Quran (HarperOne, 2015), which comprises a translation and verse-by-verse commentary on the Qur’anic text that draws on the rich and varied tradition of Muslim commentary. Her most recent publication, The Routledge Companion to the Qur’an (2021), is a co-edited volume with 40 articles on the Qur’an written by contemporary scholars working from different methodological perspectives. She is currently completing a monograph, Toward an Islamic Theory of Religion, and working on a selective translation of the Qur’an commentary written by the 20th century Iranian female scholar, Nusrat Amin.