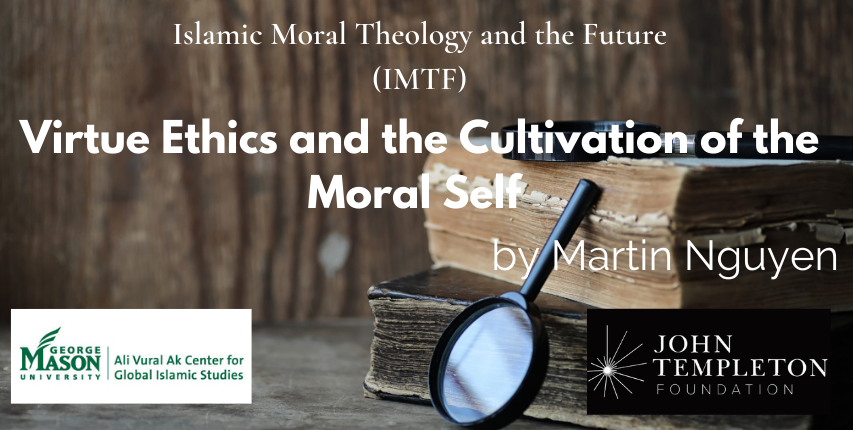 Maydan presents the opening essay for the “Islamic Moral Theology in Conversation with the Future” (IMTF) project. In this post, project co-lead Martin Nguyen, Professor of Islamic Studies at Fairfield University, explains some of the key objectives of the IMTF project that he will coordinate with Maria Dakake, Associate Professor in Religious Studies at GMU. Dakake and Nguyen, in partnership with Mason’s Ali Vural Ak Center for Global Islamic Studies, have recently been awarded a generous grant from the John Templeton Foundation in support of the project.

IMTF will bring together Muslim scholars and thinkers from around the world to explore the relevance of Islamic moral theology to issues facing the Muslim community and humankind globally. It will explore how Muslim conceptions of virtue can contribute to a broader, cross-cultural conversation about human ethical challenges in the 21st century — from income inequality and unsustainable consumerism; to virtual platforms that enhance, but sometimes also distort, our human connections; to the need to create spaces that better connect us with our local communities.

The project also aims to produce various publications targeted to scholarly audiences, including online roundtables, pedagogical resources, and journal articles in order to build new bridges with other fields of inquiry beyond Islamic Studies.

A Global Advisory Board comprising leading scholars from around the world will provide strategic advice to the project directors. Its members include prominent figures such as Ahmet Alibasic (Bosnia), Ingrid Mattson (Canada), Mona Siddiqui (UK), and Suheyl Umar (Pakistan).

The scholarly contributions to the project will be published on The Maydan, and eventually uploaded to an online portal that will allow the scholarly conversation around these topics to continue beyond the two-year grant period.

Look for the next post in the IMTF introduction series by Maria Dakake next week on The Maydan. Contributions from IMTF-affiliated scholars will begin to run shortly thereafter later this Fall!

This post and that of Prof. Maria Dakake mark the official beginning of our respective but interrelated inquiries into contemporary Islamic moral theology. Over the course of the next two years, we will each facilitate an ongoing roundtable of Muslim voices on questions of relevance today. Prof. Dakake’s roundtable will focus on “society” and turn to questions concerning Islamic conceptions of community and space. My roundtable will focus on “self,” specifically the meaning and relevance of virtue ethics today. Admittedly, this is an ambitious undertaking, but one we believe worth pursuing with careful deliberation, faithful discernment, and a spirit of open engagement. In the months to come, we will invite half a dozen scholars to each roundtable so that they might comment in turn on the theological questions we pose. We are aiming to bring to the table, so to speak, Muslim religious scholars, faith leaders, and academics from across the Muslim world, broadly conceived. We aim to bring together Muslim voices formed in and conversant with an array of educational and intellectual backgrounds. It is our hope that their responses, challenges, and critiques will prompt all of us to reflect more deeply on and embody more actively these matters of Islamic moral theology.

Of course, given the broadness of the task, our lines of inquiry must be honed. For the virtue ethics roundtable, I am drawing attention to a particular web of Islamic concepts, practices, and virtues and how they relate and respond to global trends in consumption, growing wealth disparities, and the perennial dilemma of poverty. Our focus is decidedly economic. The Islamic ethical web that will serve as our entry into these matters will begin with faqr (“poverty”) and zuhd (“asceticism”) and end – God willing – with riḍā (“satisfaction”) and tawakkul (“reliance”). These religious concepts have long been a part of the Islamic tradition, in all its depth, vastness, and turbulent tension. The roundtable participants will be invited to consider how these various religious ideas confront our contemporary economic challenges and how they engage with the wellbeing of our individual selves and the broader communities in which we live.

“The Islamic ethical web that will serve as our entry into these matters will begin with faqr (‘poverty’) and zuhd (‘asceticism’) and end – God willing – with riḍā (‘satisfaction’) and tawakkul (‘reliance’).“

While contributors will explore the numerous ways that Muslims have historically understood these ideas, their reflections will be directed primarily toward relating such understandings to the particular issues facing Muslims and others across various contemporary contexts. We will begin by examining these virtues against present economic realities at both the local and global level. What do these religious virtues and principles look like against our present economic realities? How are committed Muslims to practice, embody, and live them? What challenges must be identified, named, and confronted? What significance, if any, ought these understandings hold for our prevailing cultures of consumption.

Poverty as Condition and Dilemma

For the first couple of months, the roundtable will turn to Islamic understandings of faqr or “poverty,” given the important, multiple layers of meaning that faqr possesses within the Islamic tradition. On one level, poverty indicates a state in which basic needs cannot be met. Both the condition of poverty (faqr) and those persons experiencing it (faqīr, plural fuqarāʾ) are frequently referenced in the Qur’an and the preserved sayings of the Prophet Muhammad (pbuh) in numerous ways. For example:

Be steadfast maintainers of justice, witness for God, thought it be against yourselves, or your parents and kinsfolk, and whether it be someone rich or poor (faqīran), for God is nearer unto both (Q. 4:135)

Satan threatens you with poverty (al-faqr) and commands you to indecency (Q. 2:268)

Charitable offerings are only for the poor (al-fuqarāʾ), and the indigent, and those working with them, and those whose hearts are [to be] reconciled, and for [ransoming] slaves and for debtors, and in the way of God, and for the traveler: a duty from God (Q. 9:60)

“Seek refuge in God from poverty (al-faqr), want, and humiliation, and from wronging others and from being wronged.” (Sunan al-Nasāʾī)

“Relieve me of debt and enrich me out of poverty (al-faqr) and let me enjoy my hearing, my seeing, and my strength in Your way.” (Muwaṭṭāʾ Mālik)

These examples are far from exhaustive, yet each reference raises a raft of questions with respect to their interpretation and implications for today. Likewise, the legal tradition’s discussion of the poor is also worth exploring. What ethical bearing or theological insight do juridical considerations of the poor have for alleviating poverty today? What underlying assumptions, premises, and conditions are at work? It is our intention to direct our roundtable participants to engage with these critical and nuanced matters.

There are also scriptural references and prophetic traditions that reference faqr in ways other than as a state to be removed or redressed. For instance, we have statements like the following:

“If you love me, you should be ready for acute poverty, because poverty comes to those who love me, faster than a flood flowing towards its destination.” (Riyādh al-ṣāliḥīn)

Open to interpretation, passages like these became central in the development of certain traditions of Islamic ethical discernment. In the Sufi tradition of moral refinement,  faqr was reimagined as an aspirational personal virtue. Sages like al-Sulamī (d. 412/1021), al-Qushayrī (d. 465/1072), al-Hujwīrī (d. 464/1072), and al-Ghazālī (d. 505/1111) composed treatments on faqr in Arabic and Persian that understood the term as a key station or concept of the Sufi spiritual path. As al-Qushayrī writes:

“Poverty is the hallmark of the friends of God, a decoration of the pure, and the special feature with which God – praise be to Him – distinguishes His elect ones from among the righteous and the prophets.” (Al-Qushayri’s Epistle on Sufism, 281)

What are we to make of these spiritual traditions that valorize poverty? What does a commitment to spiritual poverty and ascetic modes of life have to offer today’s world, one driven by consumerism, mass production, and cultures of conspicuous consumption? What does this look like on a practical level?

More broadly, how are we to understand the many deployments of faqr by God and the Prophet Muhammad? How can these past discourses be made to engage with the poor today? How are religious passages like the ones cited above, both scriptural and otherwise, to be brought to life in our present situation?

Surveying the Road Ahead

As the contributors engage with these texts, traditions, and conceptions, they will also be working to answer some of these prevailing questions. As growing economic inequalities and its subsequent health and social consequences become more pervasive, what role can and do such religious virtues play in navigating these challenging developments? What shape do these religious ideas take as human-to-human interactions are incrementally obscured by new forms of exchange, consumption, and social interactions? Ultimately, what does it mean for a Muslim today to live faithfully in this materialist world?

“These questions are meant to set the stage for the first half of the year. Over time, our focus will pivot and shift in response to the contributions shared by our roundtable participants.”

These questions are meant to set the stage for the first half of the year. Over time, our focus will pivot and shift in response to the contributions shared by our roundtable participants. We will turn to the principle and practice of zuhd, “renunciation” or “asceticism” shortly after faqr. Then we will consider a set of virtues that seem to confront the materiality of our world: riḍā (“satisfaction”), qanāʿa (“contentment”) and tawakkul (“reliance”). How are these virtues to be enacted and understood in our increasingly digital environment? Might we spend time thinking through the impact that social media and society’s increasing reliance on algorithmically mediated interactions and decision processes have on our sense of moral self? As the online discussion unfolds, economic and technology experts will be periodically invited to share their insights, research, and expertise.

These online conversations on Islamic virtues, economic and technological challenges, and poverty will converge and culminate on two different occasions as the invited contributors and experts gather for two planned in-person conferences. It is our plan to host these conferences at the end of each year of this two-year undertaking. While the local public and area scholars will be invited to engage and broaden the critical discussion, we also intend to stream these gatherings as well in order to maintain our robust engagement with broader online horizons.

Martin Nguyen is Professor of Islamic Studies and Chair of the Religious Studies Department at Fairfield University. His work revolves around Islamic theology and ethics, the Qur’an and its interpretation, Sufism, and the intersection of race and religion. His latest book Modern Muslim Theology: Engaging God and the World with Faith and Imagination (Rowman & Littlefield, 2018) presents a contemporary theology rooted in the practice of the religious imagination. He is also the author of Sufi Master and Qur’an Scholar: Abū’l-Qāsim al-Qushayrī and the Laṭāʾif al-ishārāt (Oxford, 2012), which explores the confluence of Sufism, theology, and Qur’anic hermeneutics in the life and works of an eleventh-century mystic and scholar.He also serves on the board of the Society for the Study of Muslim Ethics.