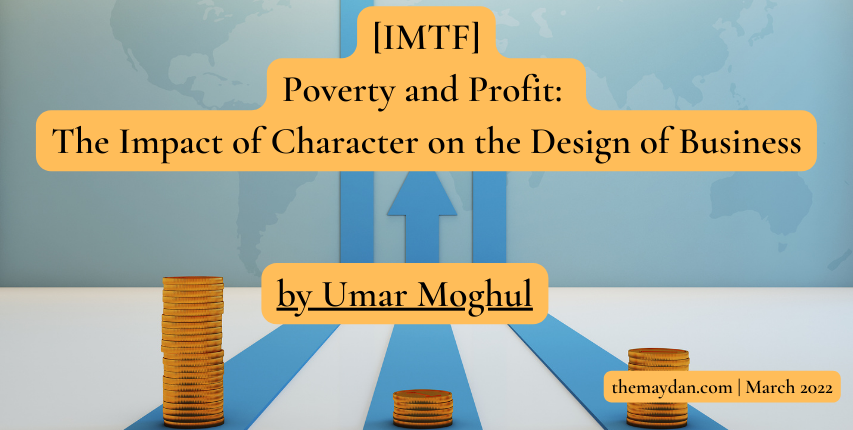 Islamic spirituality, in both its principles and practices, establishes an impetus and a framework to design businesses that support a positive social and environmental impact. Among them is the notion of faqr (poverty), raised by Professor Martin Nguyen in his inaugural post, in connection to the Qur’anic verse (2:268): “Satan threatens you with faqr and commands you to indecency (fāḥisha). Allah promises you forgiveness from Him and abundance (faḍl).” How might the spiritual-ethical lessons from this verse form a component of the methodological framework through which business is conducted today?

Poverty is generally viewed as a condition to avoid and ameliorate. Why then does the verse caution against it, so much so that the word Satan is placed at the outset to seemingly emphasize the fear’s Satanic origins?[1] Why do other texts of the Shari’ah and spiritual works extol poverty, even teaching love for the poor?[2] Al-Ghazālī (d. 505/1111) answers the first question: “[T]he poverty that consists in acknowledging indigence (maskana), lowliness (dhilla), and neediness (iftiqār) before God, is the one [requested] by the prayer of God’s Messenger and by every chosen servant from the denizens of Earth and Heaven.”[3] Based on this understanding, faqr is dependence and need, an indispensable component of human reality. The poverty from which the Messenger, upon him be the peace and blessings of Allah, sought refuge is not of this definition, but of dire physical want. Forgiveness and abundance, hallmarks of generosity, are, on the other hand, godly in their origins and practice.

This verse follows a series of others that encourage giving (ṣadaqa). Following it is a set of verses prohibiting ribā or for our purposes interest on a loan of money. Verses enjoining generosity are juxtaposed with stern warnings against ribā. Ethically speaking, the two, and their consequences, are diametrically opposed. Commenting on this verse, al-Qushayrī (d. 465/1072) is reported to have said the following:

“Satan promises poverty because of his poverty. God promises forgiveness because of His generosity. Satan promises you poverty and counsels you to hold on to what is known. It is said that [Satan] counsels you [to yield] and in yielding to him [you yield] to greed, and there is no poverty worse than this. He promises you poverty by handing you over to your [own] direction (tadbīr) and your [own] preferences (ikhtiyār). He promises you poverty to forget what you have become accustomed to from [God’s] bounty…by attaching your heart to what it does not need…by deceiving you from seeing that [God] suffices. He enjoins you to indecency that is desire for the present world [and to indecency] through the bonds that strengthen greed.[4]”

Satan’s threat places a worry of looming poverty. Expecting scarcity as a consequence of God’s encouragement of ṣadaqa – i.e., giving and sharing – is to cling to the presently possessed and quantifiable in an anxiety concerning an unknown future return. Depending on the depth of the fear of lacking and the hunger for more, that belief in impending scarcity becomes akin to poverty en route to greed: faith and hope in God’s abundance fades, leading to lack of contentment. A doubt about provision is a doubt concerning the Provider. Following Satan’s instigations, indecency (fāḥisha) may even become the means by which these fearful individuals fulfill their perceived need. Ibn ʿAjība (d. 1224/1809) explains that fāḥisha here is stinginess (bukhl) and avarice (shuḥḥ), citing a hadith: “The miser is far from God, far from the people, far from the Garden, and close to the Fire. The generous one is close to God, close to the people, close to Paradise and far from the Fire.[5] The ignorant generous one is more beloved to God than the miserly worshipper.”[6] Ibn ʿAjība adds that Satan commands to suspend efforts with secondary causes (bi’l-wuqūf ma’a al-asbāb), not their Creator.[7]

Faith is reflected in, and developed by, actions. The outward, in other words, manifests what is within.[8] Spirituality and conduct have an “inextricable organic and structural relationship” such that behavior depends on faith.[9] Obedience to law, infused as it is with ethics, supports spiritual growth. Our interactions with wealth are no different in this regard. The objective of business is either to gain subsistence or immense wealth, says al-Ghazālī. To the extent the latter longing exists, an attachment to wealth is present. The hadith, “O Gabriel the world is home to one who has no home and wealth to one who has no wealth, and for it hoards one that has no comprehension” may be understood in this light.[10] Capital transactions then are designed and variously documented, manifesting a fear of scarcity, trust in God’s abundance, or something along the path between.

Investments take the form of equity, debt, or a hybrid thereof. Debt is typically used today as a tool for extraction – be it from human counterparties or fellow servants amongst non-human creation.[11] Studies demonstrate the central, causative role of debt to concentrations of power and wealth and environmental catastrophe.[12] The corresponding contract is written up to guarantee a fixed, precisely specified flow of capital return. Risk is transferred, or rather shoved, upon the other in a refusal to connect, bind and establish relationships beyond the merely transactional. Unequal risk sharing is critical to understanding the dangers of debt. The miser maintains its grip, refusing to share of what has been given. The Shari’ah, on the other hand, conditions an investor’s entitlement to profit on bearing risk. Resulting equity-based mechanisms are borne of trust in the generosity from which abundance flows, taking that generosity as a lesson. These structures are better suited to build resilient communities and markets, sustainable wealth, and greater wealth equality. God forgives and provides, lest one resort to ribā, yearning for more, as the word itself quite literally means (ziyāda).[13]

“For those of us that may struggle with the fear of scarcity in business, but aspire to fulfill the rules of the Shari’ah, the spiritual ethics that underlie these rules are especially important“

For those of us that may struggle with the fear of scarcity in business, but aspire to fulfill the rules of the Shari’ah, the spiritual ethics that underlie these rules are especially important. Without them, the struggle often results in an approach of legal formalism that has been a common contemporary result. Instead of a fiqh that reflects and fulfills the teachings of the Shari’ah, we find separation between these carefully intertwined realms. What is definitive of this reengineered debt is apparently more comforting than the wisdom of Divine rulings. An investor who chases a given return might point to a conventional (i.e., non-Islamic) instrument as a benchmark, from which even this orphaned fiqh is absent, demanding the heavy structuring of debt to resemble equity. A financier may seek what it perceives as a lower risk investment with predictable cash flow. Both ultimately seek through the fine print to “ensure” that profit will certainly accrue, regardless of the venture’s underlying realities. Yet debt deludes investors not only in otherworldly terms, but worldly as well. Having endured various financial crises now, it is well known that a debt intensive market is more vulnerable and unstable than one in which equity prevails.[14] Hence, we engineer a veil between God and ourselves. “Your absorption with yourself and with your appetites is a preoccupation with what is other than God.”[15] Ibn ʿAṭā Allāh (d. 709/1310) advises, “Do not stretch out your hand to take from creatures unless you see that the Giver amongst them is your Lord. If such is your case, then take what knowledge says is suitable for you.”[16]

An alternate approach is one that initiates business with trust in God’s abundance, appreciating that abundance is reflected in the wisdom and rationale of God’s laws and their consequences. Equity-based financial structures are premised on inclusive participation: an invitation to share in profits should they result. That is to say, the return is not articulated through scarcity in the form of an absolute amount guaranteed, but as a reflection to share what profit may or may not be earned. Consider liquidation preference, a common contractual clause in venture capital investments. The provision comes into play where a business has not performed as planned and the investor is looking to recoup its losses. It grants its holder, the investor,  the right to be paid before other shareholders in this and similar cases. If anything remains of the company’s assets after the investor has been paid, only then do other shareholders participate in the remaining wealth of the company.

“An alternate approach is one that initiates business with trust in God’s abundance, appreciating that abundance is reflected in the wisdom and rationale of God’s laws and their consequences.“

The Shari’ah, as I have seen it implemented in my work, requires that what remains of the business’ assets are to be distributed among the shareholders pro rata, i.e., without preference or priority. Rather than to exclude and extract, we find a certain mutuality and symmetry among investors, as they share in risk, trusting that the outcome will be wisely, generously, and Divinely managed. Mandatory redemption, a common contractual clause in equity-based investments, affords an investor a right to dispose of its shareholdings in a company at a fixed multiple of its investment. It is exercisable within a specified time frame regardless of the health of the company – i.e., regardless of whether the business can afford itself to buyback the shares of the investor. This contract clause is yet another way for an investor to “ensure” that it will be paid a certain return on its investment. In this case, Islamic law requires the clause be rewritten. The buyout price must reflect fair market value of the business at the time of the buyback, again in seeming reflection of this notion of giving in the present and receiving a future imperceptible through a lens of materialism and self. “Say: In the bounty (faḍl) of God and in His mercy: therein let them rejoice. It [huwa] is better than what they accumulate.”[17]

Business structures – even the finest of terms and conditions – should be understood as a manifestation of character. Much as the artist reflects what is within, the merchant does so as well. The rules, or fiqh, that govern these structures are not mere technicalities to be complied with, but designed to reflect the ethical and metaphysical dimensions of the Shari’ah, as a whole. Their implementation today must as well.

Umar Moghul is an attorney at the law firm of Roberts Moghul & Partners LLP and Trustee at Gateway Global. He works at the intersection of Shari’ah, wealth and social impact, advising on corporate and financial matters as well as waqf, zakat and other philanthropic initiatives. He is also adjunct faculty at University of Connecticut School of Law and Michigan State Law School, where he teaches courses in Islamic business ethics and law as well as halal food. He is author of A Socially Responsible Islamic Finance: Character and the Common Good (Palgrave-Macmillan, 2017), exploring the intersections between Islamic spirituality (tasawwuf), social and environmental impact, and business and trade.

[12] Amir Sufi and Atif Mian, House of Debt: How They (and You) Caused the Great Recession and How We Can Prevent It from Happening Again (Chicago: University of Chicago Press, 2015).

[17] Qur’an 10:58. Note the huwa in some interpretations may be understood to refer to God.