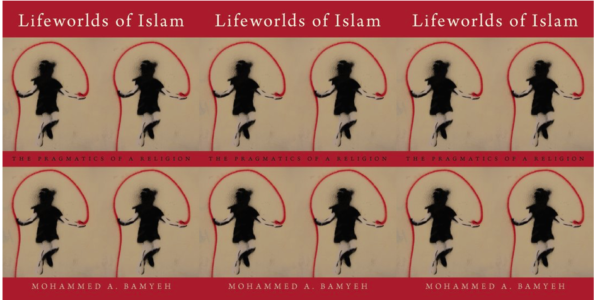 When asked to define their religion, Muslims tend to talk about anything but themselves. Explanations often range from idealized, doctrinal pronouncements about the Prophet and the sunnah, to formulaic, theological accounts such as the nature of the unity of existence, not to mention dry explanations of the “five pillars.” These hard-and-fast definitions echo, very sadly, stereotypical accounts cited by media pundits. In either case, we are left with essentialized narratives of Islam and Muslims.

“Using sociology as its primary mode of inquiry, Lifeworlds of Islam: The Pragmatics of a Religion takes Islam as a ‘historical social reality’ with all its glorious and not so glorious realities.”

What we are unlikely to hear is the following: “Islam is [simply] what Muslims do” (205). Using sociology as its primary mode of inquiry, Lifeworlds of Islam: The Pragmatics of a Religion takes Islam as a “historical social reality” with all its glorious and not so glorious realities. Audacious, historically accurate, and theoretically sound, this single-author volume aims to answer a fundamental question: why has Islam remained relevant today? The secularization thesis anticipated a general dissolution of religions, arguing that in a “post-ideological” world there is no raison d’etre for religions. While Mohammed Bamyeh does not dismiss the thesis, he nonetheless shows that Islam persists as a shared horizon for many societies due to (a) “its capacity to reinvent itself,” and (b) “the failure of alternative ideologies” (5). 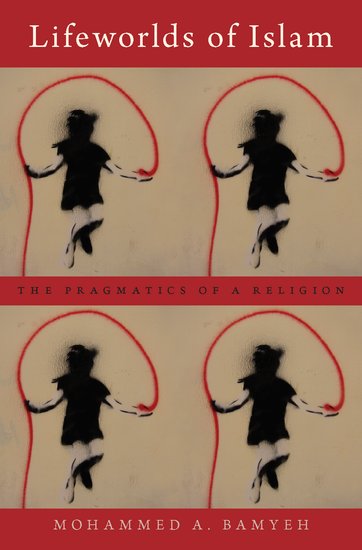 It is not only the book’s anti-essentialist core that is appealing; Lifeworlds is strictly anti-apologetic. We have been told that Islam is “a house of harmony,” a unified universe of sorts. Bamyeh shows otherwise. As Islam covers “the entire spectrum of sociability,” it inevitably houses a range of contradictory elements: “pathological demagogues, liberation theology, dictatorial tendencies, democratic sentiments, instrumental rationality, contemplative mysticism, feminism, and patriarchy” (8).

“It is not only the book’s anti-essentialist core that is appealing; Lifeworlds is strictly anti-apologetic.”

Bamyeh cautions, nonetheless, that this motley assortment of competing tendencies and seemingly incommensurable elements should not be mistaken as an inherent weakness. Rather, this openness is precisely that which has kept Islam alive and relevant—today as well as yesterday. Islam therefore serves as the common denominator for social causes and revolutionary ideas, not because its discourses bear any “essential meaning” nor because it dictates “anyone’s behavior in specific ways.” Islam as a “reserve discourse” remains a powerful point of reference “precisely because it lack[s] such qualities” (4). Like any other living religion, Islam exists “only as a social practice, and not as a set of fixed, eternal ideas” (206). It is important to note that Bamyeh is not holding such a position—Islam lacking any fixed ideas—for theology. As he acknowledges at the outset, it is the nature of sociological approaches that leaves out, among other things, “theological reason” (1). For sociology, theological discourse is secondary, that is, “[l]ife always comes before religion” (205).

Shari’a was never Meant for Politics!

Lifeworlds of Islam helps to unlearn misconceptions. The Shari’a is often misunderstood as a totalizing legal formula where Muslims and “Islamic” governments “apply God’s law” (91). Examining multiple historical precedents, Bamyeh shows that the Shari’a served as “a code for personal life that had little to do with state politics or the art of administering a state” (151). In dealing with the pragmatics of life, it is the religion that bends, not the necessities of life. A religion remains relevant insofar as it can “structure social life as a grand compromise” (207). “The sacred,” Bamyeh argues, “is meant for the profane,” not the other way around.

It is refreshing that Bamyeh offers a critical reflection on the events of the Arab Spring. Instead of interpreting these events by foregrounding a doctrinal explanation of Islam, the book takes these developments as civil right movements.

“It is refreshing that Bamyeh offers a critical reflection on the events of the Arab Spring. Instead of interpreting these events by foregrounding a doctrinal explanation of Islam, the book takes these developments as civil right movements.”

Unlike the Iranian revolution of 1979 where the ideology of Political Islam played a crucial role, for the subsequent emancipatory upheavals Islam functioned as a floating signifier, providing a shared ground for participation. Being Muslim, then, is more about the shared struggle—in this case, against despotic regimes—than about agreeing upon a “religion” with clear-cut parameters. It is precisely through this move that Bamyeh decouples Muslims from (doctrinal) Islam. The lived experiences of Muslims, or their “lifeworlds,” exceed Islamic theology, law, and jurisprudence.

With his mastery in comparative social theory, Bamyeh shows that it is Islam-as-a-discourse that accommodates all ideological differences under a single unifying frame. The slogan of the Arab Spring, ash-shaʻb yurīd isqāṭ an-niẓām [eng: the people want to bring down the regime], is demonstrative—not only calling for the overthrow of despotic regimes, but also demanding a total reconfiguration of social relations—les régimes du savoir, as Foucault would have put it. The faith remains relevant not because it offers a coherent social sphere across geographies and culture, but precisely because it doesn’t. Islam “allowed all social conflict to go on, […], but under the mantle of a single regulatory discourse” (8). As such, Islam offers a space of legibility for otherwise heterogeneous social entities, where dissimilar identities find “an alternative language of participation” (4).

“With his mastery in comparative social theory, Bamyeh shows that it is Islam-as-a-discourse that accommodates all ideological differences under a single unifying frame.”

Beyond the examination of secular civil right movements, the book provides useful insights to understand other phenomena in the “Muslim world,” including Wahhabism, Salafism, and fundamentalism as well as ideologies of Political Islam. Furthermore, the theoretical thrust of the book is robust enough to elucidate other democratic mass mobilizations in the age of globalized neoliberalism, including the occupy movements in the West.

The Phenomenology of “Lifeworld” and Unlikely Alliances

Bamyeh borrows the notion of lifeworld from Husserlian phenomenology in order to privilege “immersion in the [collective] world of perceptions and practices,” over both doctrinal concepts and structural systems (5). He is not taking the phenomenological notion of the lived experience as an individual experience, but as something collective. While individual perceptions are singular, the collective consciousness is not simply the total sum of all individual experiences, but transcends them. For instance, rather than using the adjective “diverse,” Bamyeh draws on Mikhael Bakhtin’s notion of heteroglossia to signify the “imagined unity” within a “variety of voices” across Muslim societies. The consciousness of the community of Muslims imagines its internally-multiplicitous discourse as One—as universal.

As Lifeworlds of Islam offers a comprehensive analysis of Arab Spring, an acknowledgement of the work of Hamid Dabashi as articulated in The Arab Spring: The End of Postcolonialism or Darysh Shayegan’s La conscience métisse would have been relevant—as their analyses of the revolutionary movements in the Middle East comes close to what is presented here. Furthermore, it would have been stimulating to examine how Shahab Ahmed’s “Balkans-to-Bengal complex” as a socio-historical discourse differs from the notion of pragmatics. Finally, the abundance of helpful references to the work of Asef Bayat and Olivier Roy on post-Islamism befittingly situates Lifeworlds of Islam in its larger epistemological context.

Depending on methodological taste or disciplinary focus, the book can be appreciated for the ways it navigates between different interpretive lenses: sociological analysis, philosophical speculations, historical narratives, theological arguments, and political explanations. Centered around sociology, Lifeworlds of Islam draws on, and engages with, a wide range of methods as the title of the book and the name of chapters suggest. Although abundantly enriched with theoretical references, Bamyeh never leaves the reader in limbo. Whenever a theoretical concept is introduced it is followed by a useful explanation, but more importantly, by historical examples. By orienting the reader toward a familiar reference, say, “Feuerbach’s thesis on Christianity” (118), Bamyeh not only saves much time, avoiding unnecessary repetitions, he also shows the capacities (and limits of) theory in the face of concrete historical phenomena.

“Depending on methodological taste or disciplinary focus, the book can be appreciated for the ways it navigates between different interpretive lenses: sociological analysis, philosophical speculations, historical narratives, theological arguments, and political explanations.”

One might assume that Bamyeh prioritizes theories and philosophical trajectories of the Islamic world, yet a deeper engagement with the work shows that the book entertains critical thought regardless of artificial geographic demarcations. We see Ibn Sina, Farabi, and Baghdadi alongside Habermas, Bakhtin, and Freud. While Bamyeh works cogently with theory, one might wonder how the book would have looked like with less theory. This is not a suggestion to reduce the theoretical sophistication, but rather to reimagine the work with theory pushed to the background in order to foreground the wealth of the historical and sociological accounts.

The book is comprised of three central chapters, “1. Islam as Social Movement: Pragmatics of Participation,” “2. Islam as Public Philosophy: Pragmatics of Knowledge,” and “3. Islam as Global Order: Pragmatics of Historical Structures,” flanked by an introduction, “Islam as Lifeworlds” and the conclusion, “Islam as Reserve Discourse.” The book also features a useful and comprehensive index. It is worth mentioning here that pragmatics is that which runs through the text as the title of chapters attest.

“Throughout the book, complex arguments are elucidated by helpful diagrams, charts, and images— many of which have been produced by the author himself.”

Throughout the book, complex arguments are elucidated by helpful diagrams, charts, and images— many of which have been produced by the author himself. Not only do we find comparative statistics charted out in a remarkably legible manner, but the lucid style of visual representation renders the arguments all the more clear. For complex historical and sociological analyses, we need a system of representation that can communicate such cases without flattening the complexities of their content. Instead of overburdening a table with confusing information, Bamyeh selects the most essential—representing them with merciless accuracy and clarity.

This is not a book that has been put together hastily. Not only does it take the time to develop      each argument autonomously, but seemingly distinct concepts (heteroglossia, pragmatics, partial control, etc.) gradually come together, corroborating the central thesis of the book.

Who is the Audience?

Any course that deals with Islam and the history of Islamic social formations should consider including this book in its syllabus. Courses that focus on contemporary social movements beyond the Middle East or the “Muslim world” would also benefit from the book, as it offers critical reflection on “contemporary structures of global life.” Although not a textbook, students in sociology, political science, cultural studies, religious studies, history, and anthropology would find the book particularly helpful for their research projects. The book is not cheap, at least at this point. Nonetheless it seems an imperative for scholars who work on Islam to add Lifeworlds of Islam to their libraries.

Ehsan Sheikholharam is a Teaching Fellow and a Ph.D. Candidate in the Department of Religious Studies at UNC Chapel Hill. He is also a Graduate Fellow at the Parr Center for Ethics in the Philosophy Department. Holding master’s degrees in architecture and religion, Ehsan’s research interrogates on the relationship between space and ideology, particularly the religiosity of non-religious buildings. His research has been published in American Academy of Religion’s Reading Religion, CLOG, WIT Press, ARTHEO, and ZEMCH. He has received recognitions from prestigious institutions including the University of Miami, Dumbarton Oak, and Roshan Cultural Heritage Institute. Ehsan has served as a Part-Time Faculty in Architecture at the University of Miami and NC State College of Design.