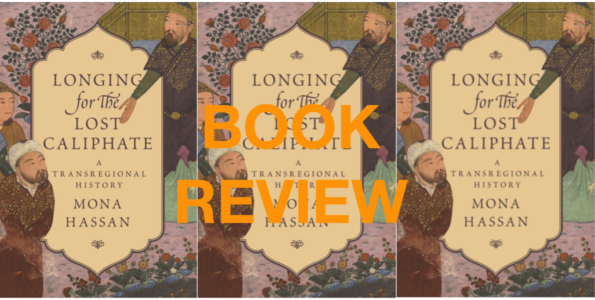 Mona Hassan’s Longing for the Lost Caliphate: A Transregional History is a critical contribution to the field of Islamic political thought, and specifically to discussions on the concept of the caliphate. The work is an example of longue durée history, encapsulating the period between thirteenth and twentieth centuries. It is also a transregional history, with its geographical scope extending from Anatolia to Indonesia. Hassan discusses two important questions: “What did Muslims imagine to be lost with the disappearance of the Abbasid and Ottoman Caliphates in 1258 and 1924 respectively?” and, “How did they attempt to recapture that perceived loss, and in doing so redefine the caliphate for their times, under shifting circumstances?”(p. 2). Using a range of conventional and unconventional sources, Hassan studies the “trauma” and “nostalgia” of Muslims that resulted from the abolition of the caliphate in these two different contexts. She argues that both instances (1258 and 1924) occasioned a palpable sense of loss in the cultural memories of Muslims, a loss for which they, through various means, actively tried to remedy. 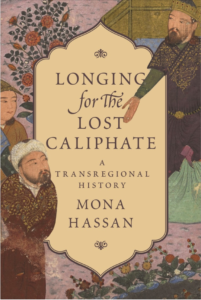 An Overview of the Book

The book can be divided into two main parts. In the first part (chapters 1, 2 and 3), the author discusses the abolition of the caliphate by the Mongols and its impact(s) on the Muslim community. In the second part (chapters 4, 5 and 6), she delves into the abolishment of the Ottoman caliphate in 1924, and its influence on the international community.

In Chapter One, “Visions of a Lost Caliphal Capital: Baghdad, 1258 CE,” Hassan describes the reaction of Muslim intellectuals and men of letters to the 1258 Mongol sack of Baghdad. Her conceptual framework identifies four ways of writing history (narrative, discursive, embodied, and artistic) that constitute Muslim collective memory. Taken together, these histories convey the poignancy of the tragic events of Baghdad (pp. 30-31). Through bibliographical dictionaries, poems, musical compositions, and many other sources, the author depicts the traumatizing influence of the event in the minds of Muslim people.

Chapter Two, “Recapturing Lost Glory and Legitimacy,” studies the Mamluk re-establishment of the caliphate in Cairo after the execution of the Abbasid Caliph Al-Mustaʿṣim (d. 1258). Here, Hasan meticulously contextualizes the (re)invention of the caliphate by tracing the network of power relations between Mamluk rulers including Baybars al-Bunduqdārī (d. 1277), Islamic scholars such as Ibn ‘Abd al-Salām (d. 1262), and “appointed” Abbasid caliphs in Cairo. Furthermore, Hassan explores the role of local actors, including Bedouins, as promoters of a caliphal candidate. In order to link these political aspects with her central argument, she insightfully utilizes a number of case-studies to showcase the importance of the caliph in the eyes of the people. One such case presented by Hassan is the public support for Caliph al-Mutawakkil II (d. 1406) in defiance of Sultan Barqūq (d. 1399), who imprisoned and deposed Al-Mutawakkil in 1383.[1] However, though the author gives ample coverage of developments in the “central lands of Islam,” she barely mentions the perceptions of the Cairo caliphate in more distant lands and frontiers.

In Chapter Three, “Conceptualizing the Caliphate, 632-1517 CE,” Hassan traces the intellectual roots of the caliphate from the death of the Prophet to the Ottoman conquest of Cairo by focusing on various scholarly writings on the caliphate. It starts with the classical articulation of the caliphate that holds the office of the caliphate to be a legal necessity, with its establishment being a communal obligation. The author presents an informative summary of various scholars’ approach to the caliphate, including al-Juwaynī (d. 1085), Ibn Taymiyyah (d. 1328), al-Dhahabī (d. 1348), al-Ṭarsūsī (d. 1357), Ibn Khaldūn (d. 1406), and al-Suyūtī (d. 1505). Through her novel (re-)interpretation of Ibn Jamā‘ah’s and Ibn Taymiyyah’s works, Hassan rejects the idea that Islamic political thought followed a “downward spiraling trajectory” after the Mongol conquest of Baghdad, an idea propagated by Sir Hamilton Gibb and Ann Lambton. Throughout the chapter, she states how the caliphate was important for all of these scholars, and how they actively worked to solve the problems emerging from the conflict between Sultanic authority and the caliphal domain.

In Chapter Four, “Manifold Meanings of Loss: Ottoman Defeat, Early 1920s,” Mona Hassan analyzes reactions to the abolition of the caliphate by the Turkish Grand National Assembly in 1924. While she focuses mostly on reactions from within the new Turkish Republic and from the Levant, she does reference reactions from other Muslim polities around the world. She successfully describes “the feeling of loss” by quoting various poems, news, and letters. On the one hand, the author deals with the outspoken criticisms of prominent figures such as Zeki Kadirbeyoğlu, rebellions in Anatolia against the abolition of the caliphate, and their harsh suppression by the Kemalist regime. On the other hand, she elaborates on the situation in the Levant, including efforts to elect Sharīf Ḥusayn as a new caliph and the reaction of colonialist states to this idea.

Chapters Five and Six are based on the post-abolition intellectual discourse around the caliphate. Chapter Five, “In International Pursuit of a Caliphate,” comprehensively explicates the various alternatives that were offered by Muslims from all over the world, from China to Berlin. Among these was the establishment of a Vatican-like caliphate and the creation of a Muslim league. Chapter Six, “Debating a Modern Caliphate,” provides contentious arguments over the necessity of a caliphate in a modern age made by significant Muslim intellectuals, mostly from Turkey and Egypt, such as Seyyid Efendi (d. 1925), Mustafa Sabri (d. 1954), and ‘Abd al- Rāziq (d. 1966).

Longing for the Lost Caliphate is a significant contribution to the burgeoning field of history of Islamic political thought, a field that has started to develop noticeably in the last years. Mona Hassan’s approach to political thought diverges from earlier scholarship, which was limited to the output of a select group of pre-Ottoman scholars and restricted to a few genres, such as mirror for princes. Although Hassan’s attempt to connect pre-modern and modern phenomena might be deemed hazardous by some due to the risks of combining two temporally unrelated events, the end result brings to light striking commonalities occurring across hundreds of years.  She binds these separate events mainly through Maurice Halbwachs’ notion of “Collective Memory” (p. 19). For the pre-modern period, Hassan insightfully describes popular responses to the absence of the caliphate through poetry and music, along with scholarly approaches. However, twentieth-century responses to the abolition of the caliphate from outside the scholarly sphere were overlooked in the book, despite being comparatively simpler to trace. Instead, the focus for this period is intellectual discourse and scholars’ reactions.

“Longing for the Lost Caliphate is a significant contribution to the burgeoning field of history of Islamic political thought, a field that has started to develop noticeably in the last years. Mona Hassan’s approach to political thought diverges from earlier scholarship, which was limited to the output of a select group of pre-Ottoman scholars and restricted to a few genres, such as mirror for princes.”

Longing for the Lost Caliphate’s most praiseworthy aspect is perhaps the great variety of primary sources mobilized by the author in the quest for a well-rounded and historical understanding of Islamic political thought. She utilises poetry, music (maqām mukhālif p. 50), coinage, archival sources, and newspapers along with scholarly works. Moreover, she uses primary sources from an impressive range of languages, including Arabic, Persian, Turkish, English, and Russian. While the number of surveyed authors is undoubtedly noteworthy, the process by which these scholars or people were chosen is open to discussion, especially in relation to their power of representation. In light of the fact that the Mongols already had ruled a considerable number of Muslims before they sacked Baghdad and executed the caliph in 1258, the views of those who supported the Mongol invasion of Baghdad, such as ʿAṭā Malek Juwaynī (d. 1283) are surely worth greater attention. In addition, Rūmī[2] scholars who were educated in Cairo in the post-Mongol period are also an under-represented subject of inquiry in Hassan’s book.

The ‘Post-Mongol’ term, generally representing the period after the Mongol invasion of Baghdad, has been framed as the ultimate pivot point in Islamic political thought in recent scholarship. Such scholarship has argued that with the elimination of the Abbasid caliphate in Baghdad, the caliphate lost its historical juristic meaning and took on a much more sacral or mystical position through the rising influence of Sufis.[3] Even if some of these books were not available to the author at the time of the book’s composition, I believe that Longing for the Lost Caliphate might have been one of the most appropriate places to discuss the question of the post-Mongol caliphate. On the other hand, she, justifiably, qualifies the caliphate with its historical meaning and analyzes the discussions around this connotation. The book, therefore, fills an essential gap in the scholarship by demonstrating comprehensively that the historical or juristic caliphate also maintained its role and importance long after the abolition of the caliphate in 1258.

“Taken together, Longing for the Lost Caliphate is a meticulous work that reconciles the shared consequences of one pre-modern and one modern abolition of the caliphate.”

Taken together, Longing for the Lost Caliphate is a meticulous work that reconciles the shared consequences of one pre-modern and one modern abolition of the caliphate. It transcends the political boundaries that have heavily influenced thought patterns in modernity, bringing new tools to the study of Islamic political thought. Hassan’s work is also a resource of essential knowledge on Muslim rulership and society, and the maps and miniatures (not to mention a musical notation) found in the book are both beautiful and instructional. Even if following the central argument of Muslim “collective memory” is sometimes challenging, the book’s fluid prose and methodical organization make it accessible to both specialists and non-specialists.

*Arif Erbil is an M.A. student in History department at Boğaziçi University and a researcher at ISAR Foundation. He holds B.A. degrees in Political Science & International Relations and History departments from Boğaziçi University in 2018. His research is focused on the early modern Islamic political thought, especially Ottoman political thought in the sixteenth century and its relations with Mamluk intellectual heritage. He is writing his masters’ thesis on the juristic perspective in the sixteenth-century Ottoman political thought.

** The author first presented this review at the 2019 Graduate Student Book Review Colloquium on Islamic and Middle Eastern Studies in 2019 organized by Ali Vural Ak Center for Global Islamic Studies at GMU.

[2] “Rūmī” refers people who lives in Anatolian and Balkan lands of the Ottoman Empire. For detailed information see: Cemal Kafadar, “A Rome of One’s Own: Reflections on Cultural Geography and Identity in the Lands of Rum,” Muqarnas 24 (2007): 7–26.