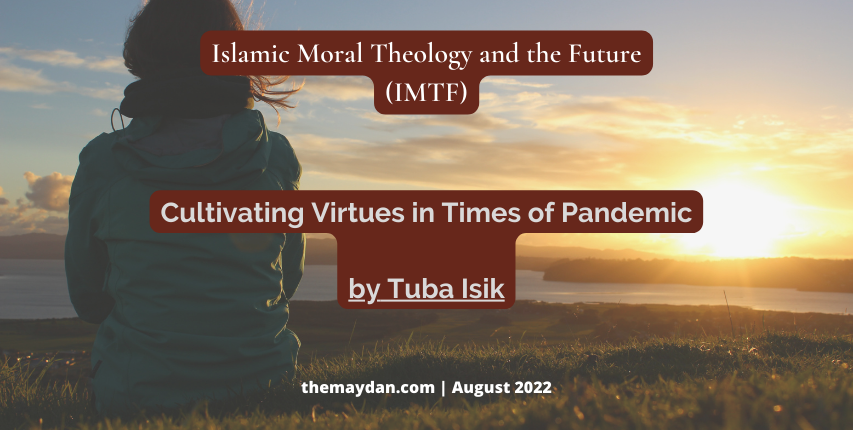 This essay (appearing also in German on Maydan) is part of the Islamic Moral Theology and the Future (IMTF) Project, generously supported by the John Templeton Foundation, and co-led by Maria Dakake and Martin Nguyen. It is specifically part of the roundtable discussion that is responding to Nguyen's second lead essay for the project. See Dakake's second lead essay for a parallel line of inquiry. Click here to read all past contributions to Dakake and Nguyen's respective lines of inquiry.

Many people have experienced intense anger and fear in the wake of the Covid-19 shutdowns and their subsequent toll on social interaction. During the pandemic, people suffered a loss of control and were confronted by their limitations. At the same time, social isolation drove people to fatigue and frustration. In the German context, a new neologism was often read in the media during the two years of the Covid pandemic, combining the adjective “tired” (müde) and the emotion “anger” (wütend) to describe people’s reactions to the novel circumstances: “mütend.” However, another way of reading the pandemic can be found in the Islamic philosophical perspective, which emphasizes the crucial importance of prudence (ḥilm) and contentment (riḍā).

Satisfaction with the Divine Will

In the German context, a new neologism was often read in the media during the two years of the Covid pandemic, combining the adjective “tired” (müde) and the emotion “anger” (wütend) to describe people’s reactions to the novel circumstances: “mütend.”

Pandemic restrictions varied from country to country; nevertheless, they all had one thing in common: contact restriction. By curbing social, face-to-face interaction, many people felt lonely, but above all, powerless, in the sense that they had no influence on current circumstance nor any way to make things better. The powerlessness of the (social) inability to act, which at the same time meant a loss of control, was additionally triggered by fear. Many people were afraid for their own well-being as well as that of those close to them, not to mention their fear for the future of the world and of mankind as a whole. Media discourses surrounding the pandemic regulations partly reinforced this powerlessness. Calls such as “We must hold out; we must not give up” suggestively evoked that perseverance was the right attitude in this state of emergency. The perceived loss of control particularly triggered the emotion of anger. A considerable number of women and children in Germany became victims of violence during the period of strict contact restrictions at home.[1] For others, the combination of fear and anger led to depressive moods, suicidal crises, psychosomatic complaints, and/or a higher sense of stress. To escape these, many people turned to things and areas of life that made them feel like they still have a measure of control: eating and buying/shopping.[2] Studies show that buying behaviour not only increased in quantity but also that consumer behaviour shifted toward stockpiling. Nevertheless, others found positive ways to channel their energies through discovering new hobbies or reorganizing their social lives.

Thinking through Covid-19 theologically, especially with respect to existential questions, is an invitation for Muslims to look at and interpret crises differently. So-called crises can be understood as an opportunity for fundamental reflection on the nature of human life and what constitutes the human being. The decisive (religious) premise for this, however, is gaining insight into one’s own human limitations. When someone embarks on the process of self-knowledge, they do not stop at their inner experience but rather orient themselves to larger contexts, which allows for a different perspective of the overall situation. The conscious decision to react differently to circumstances is a chance to foster new dispositions.

This is where the term riḍā, or “satisfaction,” is of central importance. Riḍā literally means “approval” or “contentment.” In a religious context, the term refers to satisfaction or “perfect contentment with God’s will or decree.”[3] The meaning of the word riḍā makes it clear that it is not so much a virtue (faḍīla) in the classical Aristotelian sense, but is rather an Islamic description of an inner disposition. In this sense, riḍā means much more than merely being content with the divine will (al-qaḍāʾ) as it manifests itself in the world, accepting it as khayr (good) and, at best, still trying to discover the divine wisdom behind it. Riḍā is a fundamental reconceptualization of one’s relation with God and a specific awareness when looking at the world and interpreting it. Specifically, it involves first and foremost accepting what has happened and not condemning it. The decisive role model for Muslims is the Prophet Muhammad and his tireless efforts in his confrontations with the tribe of Quraysh. The Prophet is understood as a teacher of Muslim virtues, among them sincerity, gentleness, mercy, and courage. Muhammad’s behaviour exemplifies a range of good-natured, lenient, conciliatory, and calm courses of action in the face of opponents who tend toward violent and irreconcilable actions. However, the Prophetic course of action never resulted in passivity. If a Muslim aspires to this Prophetic ideal of never defaulting to passivity in the face of events, they will appreciate the crisis, avoid the subsequent distress that afflicts others, and be in an ideal position to understand its impacts upon themselves. Accepting the pandemic and seeing it as a challenge and a positive opportunity gives us a chance to rediscover our abilities and to ask ourselves who we are, what we are dependent on, what is essential to our lives and what is not, while also appreciating the importance of slowing down, of serenity, and of calmness.

Accepting the pandemic and seeing it as a challenge and a positive opportunity gives us a chance to rediscover our abilities and to ask ourselves who we are, what we are dependent on, what is essential to our lives and what is not, while also appreciating the importance of slowing down, of serenity, and of calmness.

One’s ability to respond to events in an accepting and forbearing manner instead of an emotionally reactive manner is called prudence. In contrast to the moral philosophers, I prefer the term ḥilm to its equivalent ʿiffa, which connotes both abstinence and liberation from desires.[4] Despite ḥilm being a complex term, here we are interested in the character attributes mentioned in the akhlāq or ethical literature. The term ḥilm is defined as goodness or forbearance in moral philosophical circles such as that of the Christian philosopher Yaḥyā b. ʿAdī (d. 974) and his work Kitāb tahdhīb al-akhlāq.[5] Al-Fārābī (d. 950) refers to ḥilm in terms of virtue as the middle ground between feeling extreme anger and no anger.[6] In his work Tahdhīb al-akhlāq, Miskawayh (d. 1030), who heralds a new era in terms of Muslim moral philosophy, states very clearly that both mental and physical health can be preserved by association with good people, by constant reflection and by corresponding action; but above all by the cultivation of certain “virtues as friendliness, truthfulness, moderation and prudence, diligence, self-control, attentiveness, sincerity, and critical forbearance.”[7] Ibn Sīnā (d. 1037) subsumes under ḥilm other welcome personal qualities such as overcoming anger, generosity (honourable behaviour), tolerance, forgiveness, richness of heart, perseverance, determination, and absolution.[8] Al-Māwardī (d. 1058) refers to ḥilm as one of the most honourable virtues[9] and understands it as “mastery of the soul before angry agitation (ghaḍab).”[10] In this light, we can establish a consensus of meaning in which a prudent person (ḥālim) controls his or her own emotional state.[11] As a result, a renewal of prudent thinking and acting proves to be more urgent than ever for the present – and this extends far beyond the Coronavirus pandemic. Thus, ḥilm can be defined as a disposition to react to a situation in an emotionally contained and deliberate manner. As a virtue, ḥilm targets our self-relationship and self-reflection – a disposition primarily gained, as Miskawayh writes, through dialogue and interaction with experienced and well-meaning others. This, in turn, requires additional virtues such as courage (shajāʿa) to shape personal as well as social life, and patience (ṣabr) in the sense of a composed attitude that demonstrates individual steadfastness in the face of crises.[12] While prudence is about well-considered action, letting go is the other side of our urge to act. In letting go we acknowledge the difficulties of all our efforts, but we also accept our limitations, finitude, and inadequacies at the same time.

As a virtue, hilm targets our self-relationship and self-reflection – a disposition primarily gained, as Miskawayh writes, through dialogue and interaction with experienced and well-meaning others. This, in turn, requires additional virtues such as courage (shajaʿa) to shape personal as well as social life…

At the core of prudence, as mentioned earlier, is an examination and moderation of spontaneous emotions. It invites us to recall that we humans have some control over our emotions and their expressions. The strong, base emotion of anger, which gains influence in crisis situations, can in principle be useful when combined with a well-meaning disposition if we understand its function as an impulse and motivation for just action. This requires the capacity for introspection first and foremost. Humans have the choice to decide how they want to feel and which motive or occasion they attribute to anger. Anger induces, in my opinion, liveliness and, in the best-case scenario, change. But it can only be transformed into a positive force when we trace out its causalities. What exactly makes one angry in this moment of crisis? For instance, anger can trigger reflection and processes of realization to change something in an individual’s life. On the other hand, fear, a close friend of anger, inhibits a person from taking action and standing up from the comfortable seat of lethargy. Therefore, a contemporary, holistic concept of prudence as a virtue aims to cultivate human emotional dispositions with renewed attention. Prudence requires pausing, ‘inner contemplation’, and thoughtful reconsideration of one’s opinions.

From a moral philosophical perspective, we can view events such as the pandemic as a learning opportunity entirely in the spirit of tazkiyyat al-nafs (purification of the self). Working on the virtuous self or embodying morally good dispositions challenges people to question and reconsider habituated dispositions of perception, decision-making, and action. Attitudes shape people’s relationship to themselves and to the world. For this reason, attitudes can be significantly relieving, especially in challenging, conflictual situations, and can reduce complexities to such an extent that people become capable of action and creativity even in the most difficult of times.[13]

Tuba Işik is a professor of Islamic education and practical theology in the Berlin Institute of Islamic Theology at Humboldt University in Berlin. Her research interests include religious education and its pedagogy, virtue ethics, Muslim women, and comparative theology. Işik is the author of Systematic and Historical Reflections on the Meaning of the Prophet Muhammad for Religious Education (2015) and a monograph on character cultivation from a philosophical point of view (forthcoming, 2022). She is a co-editor of the first textbook in German on the didactics of Islamic religious education (2022). Işik holds a master’s degree in international public law and pedagogy from Georg-August University of Göttingen (Germany) and a Ph.D. from the University of Paderborn, Germany. She also studied Catholic theology in Paderborn and Rome and received further education in Islamic education at the University of Osnabrück and the Ilahiyat Faculties of Bursa and Ankara in Turkey.

[7] See Hans Daiber, “Chapter 26 Miskawayh’s Purity of the Soul as a Program Leading to Ethicization of Knowledge” in From the Greeks to the Arabs and Beyond. Leiden, The Netherlands: Brill 2021, 506.