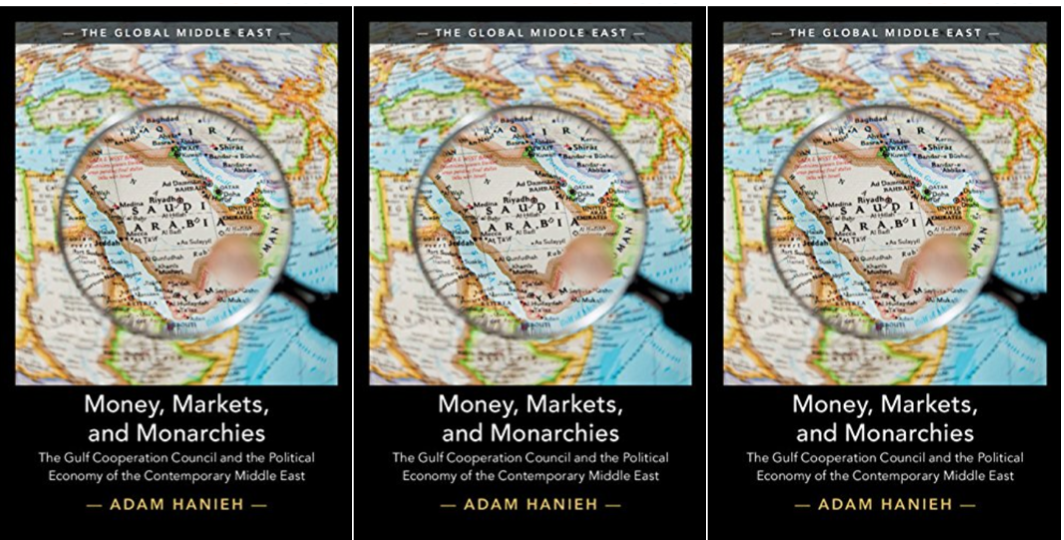 The countries that comprise the Gulf Cooperation Council (GCC) have witnessed a shift in their economies in recent times. After the publication of various ‘Vision 2030’ documents, these countries are instituting policies that attempt to make their oil-dependent economies more viable and diversified.

Adam Hanieh’s Money, Markets, and Monarchies is a timely piece of scholarship for many reasons. He provides an analysis of the astonishingly rapid growth of the GCC countries and outlines key tools  they are using to set the agenda in the Middle East today as the new centers of the region[1] In this regard, the Doha or Abu Dhabi of the 2000s is like Nasserist Cairo in the 1950s: the cultural and political leader of the Arab countries. 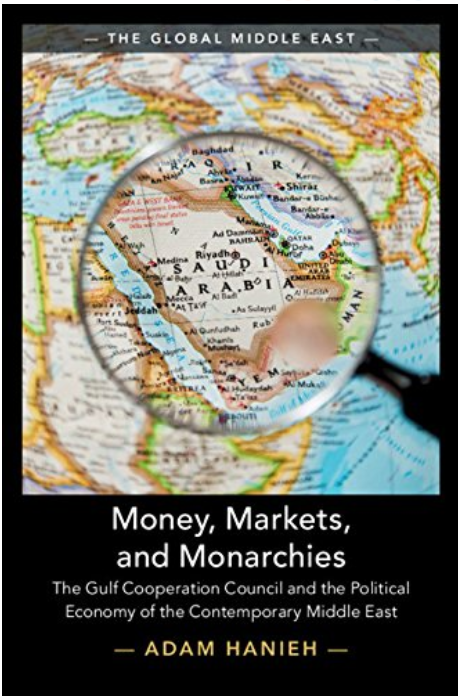 Hanieh treats the Gulf from the lenses of a political economist. More than just oil exporters, these countries are key participants in the global capitalist network. He explores both the “co-constitution of the Gulf’s political economy with that of the global” (7) and how the shifting patterns of accumulation have shaped the role of the GCC in the wider Middle East.

The book divides into three parts. After an introductory chapter, Part 1 (Chapters 2 and 3) defines the patterns of capital accumulation in the Gulf, the role of capital surpluses in the world economy and the features of Khaleeji capitalism, exploring three main places of accumulation: industry, the built environment and financial markets. Part 2 (Chapters 4-6) focuses on the relation of capital in the Gulf and the wider Middle East through three sectors: agro-commodities, commercial and residential real estate, and financial markets. Part 3 (Chapters 7 and 8) analyzes the effects of the 2014 fall of oil prices and future prospects in the region, particularly those related with the reconstruction of conflict areas.

A Nuanced Approach to the Center/Periphery Model

In the introductory chapter, Hanieh insists that frequent dichotomies like center/periphery, urban/rural or North/South only limit the analysis and that “capitalism necessarily operates throughout all scales” (13), arguing that neoliberalism expands beyond the nation-state and that the power and functions of the latter have to be re-examined. Financialization of commodities, services and spaces, especially after the 1990s, worries Hanieh, because “so much more of social daily life [is exposed] to the turbulence of market dynamics” (9).

“Chapters 2 and 3 describe how the increased demand for fuel from Asia has led the GCC countries to accumulate huge amounts of surplus capital that they want to recirculate, mostly in Europe and the US, but also in emerging centers in Asia.”

Chapters 2 and 3 describe how the increased demand for fuel from Asia has led the GCC countries to accumulate huge amounts of surplus capital that they want to recirculate, mostly in Europe and the US, but also in emerging centers in Asia. The question, then, is “who holds them, where they go and what they do” (31). Hanieh describes how huge business conglomerates, like the Dallah Al Baraka Group, Al Kharafi, Al Rajhi, Al Shaya or Ghurair (see Tables 3.2-3.5) have grown and participate in a triangle system where financial markets fund industry and construction, and industry provides commodities (petrochemical, cement, steel, etc) for built environment related businesses (64). He also emphasizes the importance of telecom companies, describing their approach to the smart city as a “totalising vision of urban existence” (86).

“He also questions the conventional division between public and private capital in the Gulf and portrays the two more as a mutually reinforcing pair than two distinct entities (64).”

He also questions the conventional division between public and private capital in the Gulf and portrays the two more as a mutually reinforcing pair than two distinct entities (64). This provides some valuable insight for rentier state theory, which has long held that the state hinders private entrepreneurship. Hanieh, nevertheless, does not extensively explore recent literature on the rentier state theory that addresses this phenomenon.[2]

The second part of the book begins with chapter 4, which deals with the production, import and export of food. His central point is that the increase in the price of food in 2007/2008 made food security a priority in GCC policy, with consequences including the land grab or overseas acquisition of farmland to secure crop provision (in Brazil, Ukraine or Egypt), or some efforts to bolster domestic production, like the Qatari state-led Hassan Foods (119). The role of the GCC countries as a re-export zone is also tackled, with Egypt, Jordan or Iraq as relevant markets.

In chapter 5, dedicated to the built environment, Hanieh opposes megaprojects aimed at tourists and wealthy residents and informal housing for the predominantly Asian workforce. This model, he claims, is being expanded across the wider Middle East by GCC companies or via Gulf capital in local networks (148). He points to projects like Rawabi, where the role of Qatari capital and telecom companies has been key to its development as a smart city (170).

Chapter 6 explains how GCC institutions like the Qatar National Bank, Emirates NBD, National Commercial Bank (Saudi Arabia), or Al Ahli Bank (Kuwait) directly rule over other banks in the region (in Egypt, Jordan or Tunis) or are intertwined with other banking institutions (like the Bank Audi, in Lebanon).

Vision Programs and the Future of the GCC

Part 3 takes a different approach. In Chapter 7, Hanieh claims that the fall of oil prices in 2014 that followed a “period of expensiveness from 2000-2014,”  made Gulf countries rethink their strategies for the future (199). The most notable case is the role that King Salman and his son, Mohammed bin Salman played in the Saudi Arabia National Vision 2030, a program that aims to cut public expenditure, and increase privatization (or creation of less expensive public-private partnerships) as well as raise taxes (225). Such a program, according to the author, is a means to keep expanding the places and size of capital accumulation in other sectors. Some early consequences include the collapse of the Saudi Oger conglomerate in 2017 (owned by the Hariri family), or a generational takeover in some key Saudi offices, with incumbents with more technical and international backgrounds than the staff they are substituting. Hanieh also highlights the role of individuals like Khalid bin Abdulaziz Al-Falih and his connections to firms and people like J. P. Morgan, Henry Kissinger or Condoleezza Rice in this program (212).

The last chapter examines the prospects of the region in the near future. One of the main issues is the reconstruction of the currently devastated countries of Syria, Yemen, Iraq and Libya, where projects are being carried out by firms based in GCC countries (241-242); the anti-Qatar campaign enacted in Washington D.C. after the Saudi-led Qatar blockade (247); the Qatar strategy to win support (249); and the GCC-Israel rapprochement in recent years, something he sees as a continuation of US and European interests since the Oslo Accords (251-252).

“The outstanding depth and range of information regarding business conglomerates and operations between Gulf states and other countries in the Middle East and abroad gives the reader a panoramic view of how the Gulf looks like in terms of investment and political economy.”

Money, Markets, and Monarchies is a brilliant piece of scholarship that must be included in the collection of anyone interested in the Gulf and its economies. The outstanding depth and range of information regarding business conglomerates and operations between Gulf states and other countries in the Middle East and abroad gives the reader a panoramic view of how the Gulf looks like in terms of investment and political economy. That being said, the book often overlooks differences between countries within the GCC, And the ideas it presents about financialization might seem somewhat vague. Nevertheless, it offers huge contributions to the field, including an analysis of the growing relationship between Gulf countries and the wider Middle East region as well as a brilliant chapter describing the food security policies of the GCC after 2007.

Javier Guirado Alonso is a doctoral student at Georgia State University. He also holds an MA in Arab & Islamic Studies from the Autonomous University of Madrid. His research deals with the role of informal institutions in the Gulf countries and their influence in culture, politics and society. His work has recently appeared in Foreign Affairs and the Georgetown Journal of International Affairs.

[2] See Matthew Gray, “A Theory of ‘Late Rentierism’ in the Arab States of the Gulf”, Georgetown University School of Foreign Service in Qatar, Occasional Paper No. 7, 2011; Michael Herb, The Wages of Oil. Parliaments and Economic Development in Kuwait and the UAE (Ithaca: Cornell University Press, 2014); Steffen Hertog, Princes, Brokers, and Bureaucrats. Oil and the State in Saudi Arabia (Ithaca: Cornell University Press, 2011).