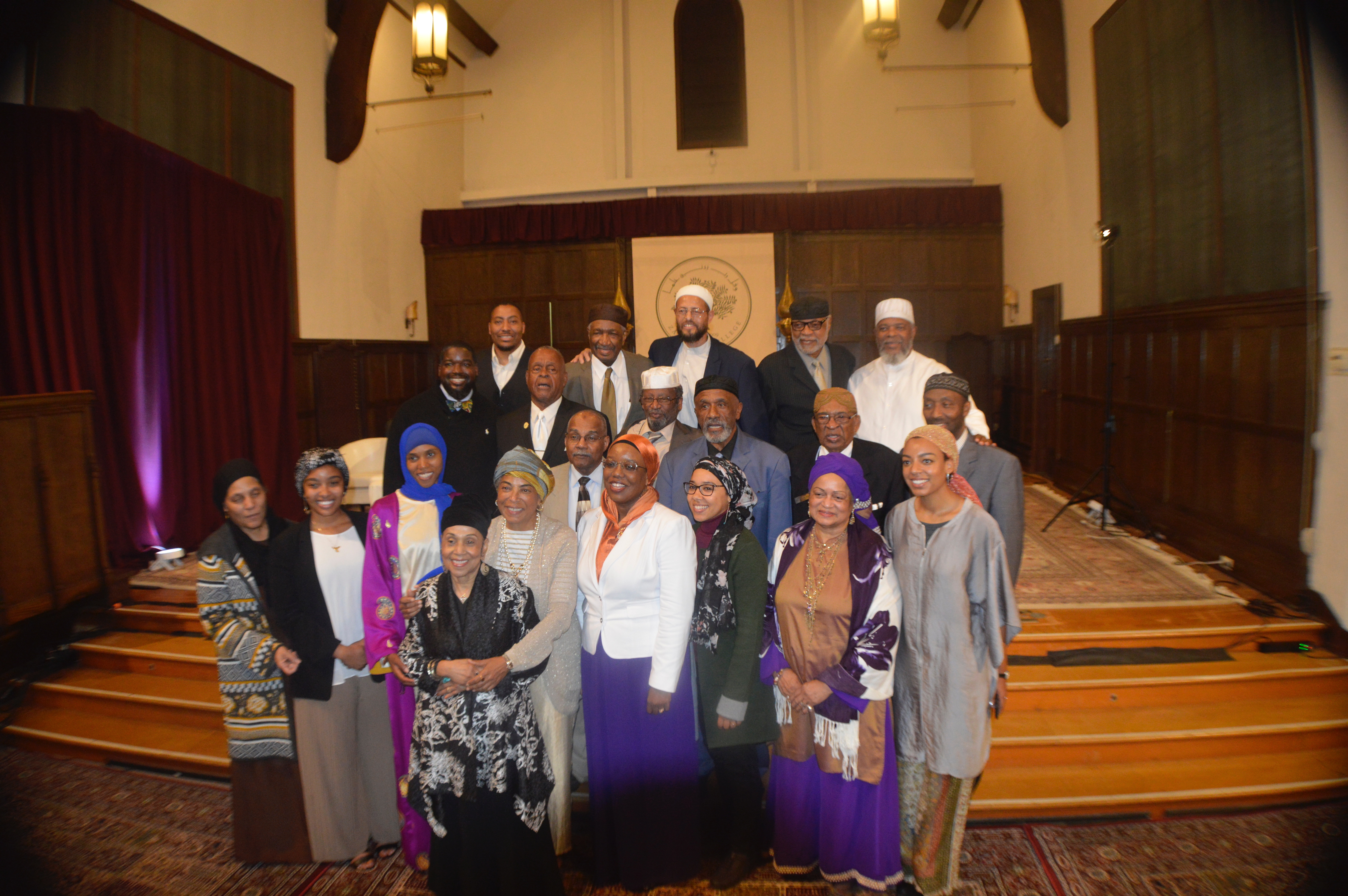 This essay first appeared in the Muslim Journal, Vol. 44, No.9, November 16, 2018. It is republished here with minor changes. We are thankful to the editorial team of the Muslim Journal for their kind permission.

There was an electrifying energy in the 400-person crowd throughout the day-long conference.

The event was a one-of-a-kind conference, titled “An Academic Examination of Elijah Muhammad’s Contribution to the Ministry of Imam W. Deen Mohammed,” hosted at Zaytuna College in Berkeley, CA on Saturday October 27, 2018. The conference brought together 14 notable leaders and pioneers in the national community of Imam W.D. Mohammed who led his father’s Nation of Islam (NOI) after 1975, radically changing theological and organizational foundations of this seminal movement. The event was conceived and planned by Fitrah Muhammad (a leading officer of the Nation’s Mosque in Washington D.C.), who explained that the conference was intended as a way of memorializing the legacy of The Honorable Elijah Muhammad (1897-1975).

The speakers and panelists throughout the six sessions of the conference were a remarkable group with an extraordinary wealth of history, memory, wisdom, and experience. There was Imam Darnell Karim, who was born into the Nation of Islam at its infancy, whose father was incarcerated next to The Honorable Elijah Muhammad during World War II, and who was the oldest childhood friend and classmate of Imam W.D. Mohammed.  Also present was Imam Darnell’s wife of 60 years, Gloria Karim, who also came from a family of “pioneers,” as both her parents and grandparents were part of the close inner circle of Elijah and Clara Muhammad’s family. Then there was Imam Abdul Karim Hassan, who converted after hearing Minister Malcolm X speaking in Connecticut in 1955, and became a minister himself in 1959. At the ripe age of 87, he still was able to fire up the crowd with his sharp wit and enthralling memories of the early days in the Nation of Islam under the leadership of The Honorable Elijah Muhammad. Alongside such giants and pioneers stood much younger contributors as well, such as one of the moderators, Aidah Aliyah Rasheed, who proudly identified as a fourth-generation Muslim whose great-grandmother converted to the Nation of Islam. Throughout this long day of panels, almost every speech built up towards an exhilarating crescendo, as the speakers gradually became more and more animated, in tandem with an increasingly lively chorus of call-and-response: “Yes, sir!” “That’s right!” “Allahu Akbar!” “Mmmhmmm!” “Yes!” “Takbeer! Allahu Akbar!” Laughter, applause, and voices would reverberate throughout the hall as each speaker approached the end of their talk.

Then came Precious Rasheeda Muhammad’s talk, however, which was different. As she artfully weaved through her inspiring narrative, the audience was riveted, struck completely silent for the entire speech, hanging on to every word. The elderly man sitting right in front of me wiped away tears every so often, and I heard sniffles from the woman behind me. As she concluded her talk, the audience burst into applause and “takbirs.” Rather than gradually fade away, the applause continued to get louder and louder, until suddenly everybody in the room stood up, giving the renowned author a standing ovation that lasted over a minute. One could almost physically feel the emotion and energy in the air.


“Precious Rasheeda Muhammad alluded in her talk to the fact that the conference was originally titled ‘From Dusk To Dawn His Legacy Lives on: The Honorable Elijah Muhammad A Social Reformer and Liberator,’ but was changed in response to the pressure put on the hosting institution by other Muslims. She addressed such objections in responding to the question posed for her panel: ‘Does the End Result Outweigh the Means?'”

At the start of the event, the hosts from Zaytuna College did their best to repel such criticisms.

” Zaid Shakir and Hatem Bazian, two of the co-founders of Zaytuna College, kicked off the event in the morning with their opening remarks. ‘It is a great honor to host this event, particularly in this historical period we are living in,’ said Dr. Bazian. Speaking from his location as an immigrant Muslim, he thanked the W.D. community for being ‘the pioneers of Islam in the United States.'”

Acknowledging the contributions of leaders like Elijah Muhammad and W.D. Mohammed, as well as the struggles of African Americans through the history of Jim Crow, lynching, and the Civil Rights Movement, he stated: “We are standing on your shoulders. I wouldn’t be here as an immigrant if it wasn’t for that.”

Imam Zaid Shakir then went on to provide a much more direct engagement with the question of how to interpret the legacy of The Honorable Elijah Muhammad and the Nation of Islam. He began with the long history of Islam being understood among African Americans as a unifying force, a source of salvation and redemption. He alluded to the Islamic movements before the emergence of the Nation of Islam, followed by the arrival of the NOI on the scene, the “most powerful movement” among all these different groups. In explaining the power and significance of the NOI, he stated that for a large portion of the community, the theology of the NOI was not central, and they did not necessarily always believe in some of the more controversial teachings. What was essential to the movement was its emphasis on community, self-empowerment, and the do-for-self message. Imam Zaid’s message therefore attempted to sidestep such theological controversies by making the emphasis on Elijah Muhammad’s role as a social reformer. Each panelist throughout the day addressed these themes and questions in their own way, highlighting the contributions of the Honorable Elijah Muhammad, and explaining the discrepancy between many of the teachings of the Nation of Islam and the universal Al-Islam that Imam W.D. Mohammed guided the community to.

Ayesha Mustapha, editor of the Muslim Journal for 25 years, reflected movingly on the powerful and painful history of their community, and the redemption they experienced through Islam. She spoke about the Black American’s conditions through 400 years of chattel slavery, as the most abused people in the history of the world. It was, therefore, only God’s grace that brought them out of their debased condition and dignified them through Islam. Highlighting this concept of grace, she spontaneously began to sing the famous gospel music song, “Amazing Grace”:
“Amazing grace!
How sweet the sound
That saved a wretch like me!
I once was lost, but now am found
Was blind, but now I see.”

She continued to sing in a soft melodious voice for a whole two or three minutes. Again I found several people around my crying, sniffling and wiping their tears with a napkin. Others softly sang along with Ayesha Mustapha. As she continued singing, her voice began to crack and quaver, verging on tears herself. Everyone around me looked deeply moved. Finally, she finished her song and said softly yet firmly: “It was Allah’s grace that He gave us The Honorable Elijah Muhammad.”

Imam Yahya Abdullah of Jacksonville addressed the theological concerns most directly. In the concluding panel of the conference, Imam Yahya directly addressed the question of the final session, “did the Honorable Elijah Muhammad prepare his followers to accept universal Al-Islam?” He argued that we should turn to The Honorable Elijah Muhammad’s own words as found in his 1965 Message to the Black Man in America, wherein he has a chapter titled, “What is Islam?” In this chapter, he lays out many of the fundamentals of Islam quite clearly. Imam Yahya asserted: “What comes before and after this chapter then is questionable in relation to the religion of Islam. The rest of his teaching in The Message to the Black Man was mainly social reform.” So even “ten years before Imam [W.D.] Muhammad became our leader,” he stated, The Honorable Elijah Muhammad was himself differentiating between the authentic teachings of Islam and his own teachings in the Nation of Islam. “Did he prepare us? He taught us true al-Islam! He memorialized it for us to discover it!” In concluding on such a powerful note, the audience was very animated and impassioned by this point.

At the end of the day, after four deeply moving sessions, Fitrah Muhammad was encouraged to come up to speak about her motivation for organizing this conference. She came up to the podium fighting back tears, and slowly began to talk. She explained how the idea for this conference came to her when she visited Ghana for the third time, and as usual made a trip out to the old slave dungeons in memory of her ancestors. Listening to the same vivid stories told by the tour guide about the canals with feces and urine flowing underneath, she asked in her heart: ‘Oh Allah, I know my people cried out and begged you for mercy…’

This time, she told the audience, instead of driving back into the city, she spent the night in a nearby village not far from the dungeons. Her sleep was disturbed from the sounds of the Atlantic Ocean’s waves hitting the banks violently. When she woke up in the morning, the water had receded, and the sun had risen. There were mineral deposits in the sand, and what she witnessed was the image of a tree trunk with innumerable roots, all with muscular legs that appeared to be going back into the water. “I said to myself, ‘these were my ancestors, who came to visit and now going back to the water from the land they were taken from.’ So I knew I had to come back to the land and see the history that led us here.” She denounced those who would deny her the ability to connect with that history. “I needed people to know who had saved my life at 16 years old from the suffering of our ancestors. We are the answer G-d gave to our ancestors. We were born from that wound. We must accept our history like every other people have accepted their history.”
With these powerful words, the audience stood for a final standing ovation, and the historic event came to a close.

* All images used in this article are by Aleem Shabazz, Crescent Sports Media.

**This article is part of a larger research project on the legacy of Imam W.D. Mohammed, the recent developments within his community since his passing in 2008, and how this community has preserved their unique heritage within the landscape of alternative (and often more dominant) religious orientations.

This project is also connected to an oral history of Islam and Muslims in Boston, being conducted collaboratively between Dr. Kayla Wheeler, Dr. Ahmet Tekelioglu, and Dr. Zaid Adhami. The aim is to create an open-access digital archive of this rich history, centering in particular the voices of Black Muslims.