Tugrul Kurt was born  in Recklinghausen, Germany to a family with Turkish roots. After his Abitur, he was accepted to the special program of the Diyanet Turkey “International Islamic Theology” program in the University Marmara in Istanbul. He graduated with a Bachelor of Arts, and started in the same year (2014) a masters in History of Religion at the same university. Simultaneously he worked as a research assistant with the 29 Mayis University in Istanbul. He released his novel “Ilias” in 2014. Meanwhile he released several online publications in German about Islam and its relationship to Christianity and Judaism. His Master`s thesis “The Theosebes in Late Antiquity: History and Beliefs” headed him to further studies about religious phenomena in Late Antiquity: In 2017 he was accepted to the doctoral program at the Goethe University in Frankfurt. He is working on the topic of “The Christian sources of the Israiliyyat and the Importance of Syriac Christianity in early Islamic development”. In 2017 he became a research associate at the University of Marmara in Istanbul.  In addition to his two native languages German and Turkish, Tugrul speaks and reads in English, French, Spanish, and Arabic. He also learned Hebrew, Latin and Syriac during his studies. During his Masters program he participated in several archeological excavations in Turkey. Beside his interest in history and archeology, he also holds Seminars not only about religious sciences in general, but also about mysticism, new age religions, ancient Mesopotamian culture and belief, and primitive religions. Tugrul lives with his wife and two children intermittently in Frankfurt and Istanbul. 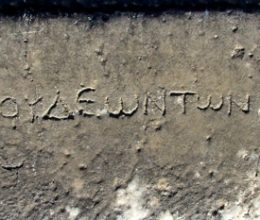 The Hanifs (Theosebes/ God-fearers) as a Common Link between Judaism, Christianity, and Islam in its Historical and Qur’anic Context

Brief Information on the Theosebes The Theosebes (God-fearers) are Jewish sympathizing pagans with beliefs and rituals of their own. They emerged between the 1st B.C and the 4.th century A.D in the Mediterranean area. The Theosebes, which…