Nurullah Ardic is an Associate Professor in the Department of Sociology at Istanbul Sehir University. He received his BA and MA from Boğaziçi University (1999 and 2001), and another MA and a PhD from the University of California – Los Angeles (UCLA) in Sociology (2005 and 2009). He also participated in the foundation of İstanbul Şehir University. His areas of interest include Historical Sociology, Religion and Politics in the Middle East, Ottoman-Turkish Modernization, Social Theory, Globalization, Historical-Comparative Methods, and Discourse Analysis. His publications include Islam and the Politics of Secularism: The Caliphate and Middle Eastern Modernization in the Early 20th Century (Routledge: London & New York, 2012) and peer-reviewed articles in Journal of Historical Sociology, Journal of Near Eastern Studies, IJMES, Asian Journal of Social Science, Journal of Economic and Social Research, Turkish Studies Review, Divan: Disiplinlerarası Çalışmalar Dergisi, Toplum ve Bilim, and Afro-Eurasian Studies. 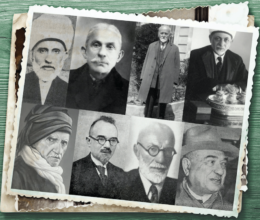 [What You Should Read] Turkish Islamism