Isil Acehan is an historian and researcher from Turkey. Her scholarly interests focus on early Turkish/Muslim immigrants in North America, and Middle Eastern immigrant and diaspora communities in the United States. She holds an M.A. and a Ph.D. degree in history from Bilkent University, Turkey.

Isil received a number of scholarships, research grants and residential fellowships to conduct her doctoral and post-doctoral research. She was a Fulbright visiting fellow at the Center for Middle Eastern Studies at Harvard University in the academic year 2006-2007. In 2008, she received a Scholar in Residence grant from the Massachusetts Foundation for the Humanities to conduct additional doctoral research. In 2009-2010 academic year, she was a Turkish Cultural Foundation fellow. Isil also received a Smithsonian Institution, Baird Society Residential Scholarship to conduct research in the Smithsonian Institution. For the 2017-2018 academic year, she served as a post-doctoral fellow at John XXIII Foundation of Religious Sciences in Bologna, Italy. Currently she is a visiting scholar at the Ali Vural Ak Center for Global Islamic Studies at George Mason University. 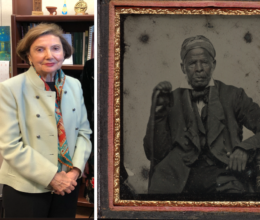 The Omar Ibn Said Collection at the Library of Congress | An Interview with Dr. Mary-Jane Deeb

The Library of Congress  (LOC) recently acquired and made publicly available online a unique collection showing the only known surviving slave narrative written in Arabic in the United States. The Omar Ibn Said Collection [1], which…