Isa Blumi (PhD, 2005 NYU) is Associate Professor at Stockholm University’s Department of Asian, Middle Eastern and Turkish Studies. Having just finished his latest book Destroying Yemen (University of California Press, 2018), which accounts for the recent violence in South Arabia by situating it in a global context, Dr. Blumi intends to continue offering analysis of the late Ottoman Empire as a global phenomenon. Advocating for appreciating the comparative value of pairing events in diverse corners of the empire (the Balkans, Yemen, and Persian Gulf), his earlier books Ottoman Refugees (Bloomsbury, 2013), Foundations of Modernity (Routledge 2012), Reinstating the Ottomans (Palgrave, 2011), and Chaos in Yemen (Routledge, 2010) all made similar theoretical and methodological pleas to scholars to look beyond specific Area Study genres. Dr. Blumi has taught at universities in Belgium, UAE, USA, Canada, Germany, Albania in addition to his current posting. 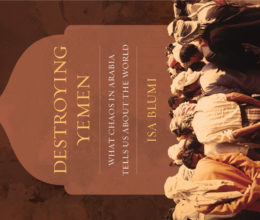 [What You Should Read] What is Happening in Yemen

The brutal destruction of Yemen continues with little debate in the larger world. Not surprisingly, accountings for the violence, justifications for its virulence and duration, and the strategic obfuscations of what could end it regularly…