Anne K. Rasmussen joined the faculty of the College of William and Mary in 1993. She is professor of music and ethnomusicology and in 2014 was named the William M. and Annie B. Bickers Professor of Middle Eastern Studies. She was inducted into the Phi Beta Kappa honors society in 2014 and is the recipient of a Plumeri award for faculty excellence. She has repeatedly been elected to the board of the Society for Ethnomusicology and currently serves as its president (2016-2017). Since 1994 Rasmussen has directed the William and Mary Middle Eastern Middle Eastern Music Ensemble, a forum for the study and performance of music and with musicians from the Middle East and Arab world.  Over the years, the ensemble has hosted more than sixty guest artists, has recorded two compact disc recordings, and has made international concert tours in Morocco and Oman. Rasmussen’s book Women, the Recited Qur’an, and Islamic Music in Indonesia, (University of California Press 2010) is recipient of the Alan Merriam Prize Honorable Mention for 2011. Another volume co-edited with David Harnish titled Divine Inspirations: Music and Islam in Indonesia, was published by Oxford University Press in 2011.  She is co-editor with Kip Lornell of The Music of Multicultural America: Performance, Community, and Identity in the USA. Originally published by Schirmer in 1997, the second revised edition with four new chapters and a new introduction was published in 2016 by the University Press of Mississippi. 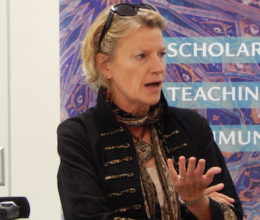 The Recited Qur’an in Indonesian Daily Life and Culture

The Qur’an is known throughout the world as a written document that can be read and studied as a text, but its active manifestation in daily life―being recited and heard—struck me profoundly when I lived…