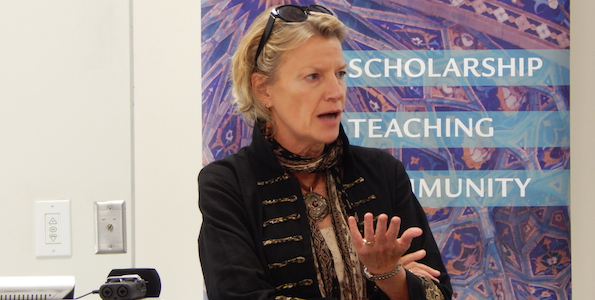 *Edited as it appears in the Freer|Sackler’s publication for “Performing Indonesia: Islamic Intersections,” held in 2016.

*The website for Anne K. Rasmussen’s book, Women, the Recited Qur’an and Islamic Music in Indonesia (Berkeley and Los Angeles: University of California Press, 2010) hosts 25 audio recordings of the contexts she describes in this essay along with several styles of Islamic musical arts (Seni Musik Islam).  These recordings are from her fieldwork and are posted along with a pdf file of explanatory notes.  You may access these recordings here by clicking on the audio/video tab just under the description of the book.

The Qur’an is known throughout the world as a written document that can be read and studied as a text, but its active manifestation in daily life―being recited and heard—struck me profoundly when I lived in Indonesia for more than two years in the 1990s and early 2000s. A primary goal of my ethnography, Women, the Recited Qur’an, and Islamic Music in Indonesia, was to illustrate the ways in which the recited Qur’an permeates the Indonesian soundscape and the ways in which Indonesians who are involved in the culture of recitation activate this performative experience.

My focus on women, from esteemed professionals to little girls, from serious university students to mature housewives, from rich to poor, highlights the prominence and public presence of women and girls in the business and culture of religion. This is an aspect of Indonesian Islam that is little known to many parts of the Muslim world, where women’s participation is perhaps more circumscribed. This activist presence of women is a testament to the cultural specificity of religious ideology and practice. Religious ideas and practices―rather than being a set of universal principles that apply to anyone, anywhere, at any time―are assimilated and localized differently in a variety of national contexts and respond to political, economic, and forces both global and local in ways that are dynamic and creative.

In my ethnography (2010), I describe five contexts in which the practice, performance, experience, and appreciation of Qur’anic recitation characterize the rhythms of Indonesian daily life. First is a ritual event called khatam al-Qur’an, when the entire Qur’an is recited by thirty reciters (either men or women) who each read one juz’ (part) simultaneously, accomplishing a collective performance of the entire text in less than an hour. The second context is found in Islamic boarding schools, or pondok pesantren, an institution for education, socialization, and communal living, where Qur’anic projects characterize the rhythms of daily life. Third is the college-level Institut Ilmu al-Qur’an (IIQ, Institute for Quranic Studies) in Jakarta, where women pursue a systematic learning of Qur’anic melodies derived from the Arab system of melodic modes (maqam, pl. maqamat).

The most talented among the students at IIQ are recruited to compete in regional, national, and even international competitions in Qur’anic recitation. To prepare for competition, these women (along with their peer male contestants) attend Training Centers (TC), week-long intensive workshops of private coaching with the best reciters from across the Indonesian archipelago. At the TC, I experienced the idiosyncratic teaching methods of champion reciters as they transmit virtuosic vocal stylings and techniques required to deliver a technically flawless and spiritually effective recitation in the course of performance at a competition. This is a fourth context for recitation.

Finally, the fifth context is the haflah al-Qur’an, literally, the Qur’an party (the term haflah is Arabic for party, usually involving some kind of performance). At a haflah, the Qur’an is performed for other reciters and for friends who are connoisseurs of recitation. Unlike the innumerable rituals during which the Qur’anic recitation is expected (such as weddings and the evening prayers held every night during Ramadan), the Qur’an is recited at a haflah for its own sake, with a purpose that is more aesthetic than ritual. It is at the haflah that the artistry of the reciter is unbridled and the effects of Qur’anic performance most artistically salient.

Reciters in Indonesia model their recitations after a handful of Egyptian reciters whose work has been widely recorded, disseminated, and broadcast throughout the Muslim world. Many of these reciters (such as the renowned Sheikh ‘Abd al-Basit ‘Abd al Samad) visited Indonesia to recite and teach, particularly after Indonesian independence in 1945, as the country gradually began to forge partnerships with other Muslim-majority nations. Although recitation has been practiced in Indonesia since Islam arrived with Arab traders and spread across the islands from the thirteenth to sixteenth centuries, it was not until this influential post-independence period that the musical styles of Egyptian reciters were proactively copied and assimilated. This is particularly true for the use of Egyptian-Arab melodic modes, or maqamat; the technical aspects in matters of tajwid; and innumerable aesthetic features, ranging from phrase length to tessitura and vocal timbre.

Contact with Egyptian reciters and with recordings of reciters and singers from the Arab world not only influenced Qur’anic recitation in Indonesia, but it also contributed to the development of a vast spectrum of seni musik Islam, or Islamic musical arts. From the mosque to the recording studio, the contexts for and contents of Islamic music in Indonesia constitute a vibrant stream of Indonesian culture as well as a dynamic and exciting aspect of global Islam. Taking its cue from the recitation of the Qur’an, many of these styles of music draw upon the thematic content of the Qur’an and the practical and artistic techniques of its recitation.

Dra. Hajjah Maria Ulfah works in a professional capacity in all of these contexts. She teaches students and groups of women across the street from her house in the religious boarding school (pondok pesantren) that she founded and directs. She is a faculty member and administrator at IIQ, the college for Qur’anic studies, where she teaches college students in classrooms equipped with the latest interactive audio technology (similar to facilities found in foreign language departments at American universities). As a coach, Maria Ulfah is in high demand, attending Training Centers throughout Indonesia and receiving students who are flown into Jakarta to train with her in her home. As a judge and member of local arrangements and program committees for recitation competitions (musabaqoh tilawatil Qur’an), Maria Ulfah is one of the most respected team members in regional, national, and international circles. And, finally, as a solo performer, her reputation is extraordinary, and her performances of the recited Qur’an are legendary.

I have had the privilege of knowing and working with Maria Ulfah since 1996 when I was invited to participate in her classes at IIQ. She and her colleagues opened their worlds to me, and I am honored to have traveled to numerous destinations with Maria Ulfah, including the United States, when she was invited in 1999 as the distinguished scholar of the Middle East Studies Association and to Harvard, Princeton, and Brown universities and to Boston College for lecture demonstrations and performances.

*Adapted from A. K. Rasmussen, Women, the Recited Qur’an, and Islamic Music in Indonesia (2010).

** For an AVACVGIS hosted event featuring Hajjah Mariah Ulfah see, on Maydan, “The Art of Reciting the Qur’an with Hajjah Maria Ulfah.”