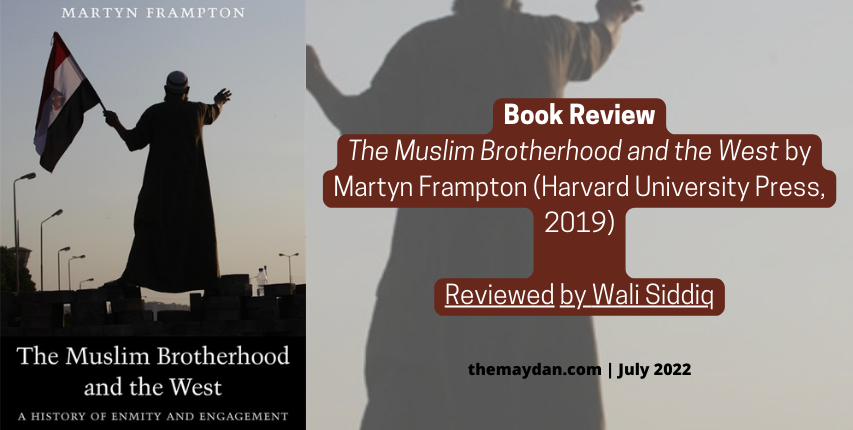 The expansion of Western economic and political dominance during and following the colonial period led to the growth of a number of resistance movements among the colonized people. One of the most prominent movements is the Jama’at al-Ikhwan al-Muslimin (henceforth the Brotherhood), which, since its inception, has been in a constant struggle with the West yet has, at certain times, allowed for pragmatism rather than ideology to steer its policy, opening the possibility of cooperation with their avowed enemy. Their struggle, primarily against British imperialism in the first half of the twentieth century and then American domination after the Egyptian revolution in 1952, ultimately shaped the course of the ideology and policies of the Brotherhood.

Their struggle, primarily against British imperialism in the first half of the twentieth century and then American domination after the Egyptian revolution in 1952, ultimately shaped the course of the ideology and policies of the Brotherhood.

The Brotherhood’s long and strenuous history with the West is the central focus of Martyn Frampton’s The Muslim Brotherhood and the West. Frampton, himself a historian of the Northern Ireland conflict, is acutely aware of the importance of hegemonic powers on oppositional movements. The significance of this text lies in its sole focus on the relationship between the Muslim Brotherhood and the West, encapsulated in Frampton’s argument that the former could not have existed without the latter. An analysis of the ideological and political trajectory of the Brotherhood is not possible without an accompanying understanding of the ideological “other” that defines it.. Additionally, the text provides a historical background for understanding the Egyptian Revolution and subsequent developments, as well as broader Western interactions in the Middle East during the 20th and 21st centuries.

The significance of this text lies in its sole focus on the relationship between the Muslim Brotherhood and the West, encapsulated in Frampton’s argument that the former could not have existed without the latter.

The first chapter studies the historical context that shaped the Brotherhood’s ideological foundations. Established by Hasan al-Banna, the Brotherhood was, from the very start, an organization reacting to Western superiority in Egypt as well as the broader Middle East. Adopting the West as its ideological “other” made the Brotherhood a potential security threat for the British, ensuring that the majority of their interactions were antagonistic.

Chapter 2 examines the relationship between Britain and the Brotherhood during the Second World War, when the British tried to suppress the Brotherhood as wartime considerations reigned supreme. However, the policy of suppression was mitigated due to the highly mediated nature of the British/Brotherhood relationship, with the British relying on an often-unsympathetic palace and parliament to implement their agendas.

The third chapter outlines the Brotherhood’s first re-birth, rising out of the ashes of wartime repression to new heights in 1945. With newfound influence on the national stage, the Brotherhood sought to influence the government through both passive and violent means. Rhetoric concerning jihad against the British and the conflict in Palestine, in which the Brotherhood participated, saw British worries increase culminating in the assassination of al-Banna in 1949.

Chapter 4 surveys the oft-forgotten War of the Canal Zone, instigated by the Brotherhood in the hopes of removing British occupation after the abrogation of the Anglo-Egyptian Treaty of 1936, which had established terms for British occupation of Egypt. The war, although relatively minor, established the Brotherhood as a group at the forefront of independence in the eyes of the public while weakening the palace’s legitimacy, ultimately paving the way for the Egyptian Revolution in 1952.

In the fifth chapter, Frampton explores the complicated situation following the Revolution with Nasser, Naguib, the Brotherhood, and other elements competing for political power. From 1952-1954, the Brotherhood, an extremist organization in the eyes of the West, was seen as the real authority behind the Revolution (although that was far from reality). This period also marks the ascendency of US power in the region and the corresponding decline of British power, with its capstone being the Suez Crisis of 1956.

The seventh chapter studies the revitalization of the Brotherhood after the death of Nasser and following the Soviet invasion of Afghanistan and the Iranian Revolution. These developments made the message of the Brotherhood resonate across the Muslim world. At the same time, the US became increasingly interested in this organization given the “fundamentalist” revival in the region coupled with the rise of Brotherhood-linked organizations across the world, which saw the establishment of mosques, student unions, and professional organizations within the West itself.

In Chapter 8, Frampton considers the blurred lines that characterized US foreign policy form the 90s onwards as foreign policy decisions and relations, specifically towards the Brotherhood, often occurred within a context where domestic Muslim populations had to be considered. The Brotherhood was no longer an organization solely limited to Egypt, but a multi-national group that spanned the globe. Furthermore, US perceptions of the Brotherhood were shaped by the possibility of having Islamists as partners in democratization projects across the region. In an effort to benefit from the West, the Brotherhood painted itself as a “moderate” Muslim organization, able to work with the West and push their discourse of democracy and human rights.

Delving through internal documents and messages as well as declassified sources from the Brotherhood, the British government, and the US government, Frampton is able to contribute an original, well-grounded analysis of the Brotherhood’s relationship with the West. Although this methodology becomes increasingly untenable as the study approaches the current day (since more recent classified sources are not available), Frampton’s approach still manages to present a study that provides an extremely deep, even personal, understanding of the West’s views of the Brotherhood and the Brotherhood’s views of the West.

Frampton’s history also contributes to our understanding of the Brotherhood’s longevity as he recognizes a set of characteristics that have allowed the Brotherhood to survive after nearly a century, even when under highly repressive regimes. To Frampton, the Brotherhood’s flexibility and pragmatism allowed the organization to forgo an ideological straitjacket (to a certain extent) and undertake certain strategic actions, such as negotiating with Western governments, which would otherwise not be considered.

To Frampton, the Brotherhood’s flexibility and pragmatism allowed the organization to forgo an ideological straitjacket (to a certain extent) and undertake certain strategic actions, such as negotiating with Western governments, which would otherwise not be considered.

Though Frampton’s history is well-sourced and well-written, such a study could also benefit from some additional considerations. For instance, though Frampton identifies and critiques the Orientalist mindset of the British during their period of dominance, as well as the Occidental mindset of the Brotherhood, such is not the case with the US. Although the US is initially seen as carrying on the Orientalist mindset of the British in the early stages of the “American age,” this quickly shifts towards an almost solely “strategic” view that guides US policy. However, as post-9/11 developments make clear, an Orientalist approach continued to play a prominent role in US policy decision-making process

Additionally, Frampton’s representation of the West focuses almost exclusively on the British and American governments. While these two governments were certainly the major players in Western interactions with the Brotherhood, there were also far more actors in this dynamic, including other Western governments, the general public within the West, and Western non-governmental institutions and organizations. Admittedly, capturing the whole range of political and social dimensions in this dynamic would be a colossus task, but given the monograph’s ambitious goal of studying “The Muslim Brotherhood and the West,” the absence of these other features bears mentioning.

Wali Siddiq is currently an MA student at George Mason University in the Middle Eastern and Islamic Studies Program. Wali is interested in Islamic thought, Islam’s relationship with politics, and Islamic Economics. Wali, also, earned his BA at George Mason University and is currently an Editorial Assistant at the Maydan, the online publication of the Ali Vural Ak Center for Global Islamic Studies at GMU.

*The author first presented this review at the Fifth Annual Graduate Students Book Review Colloquium on Islam and Middle Eastern Studies in 2021 organized by Ali Vural Ak Center for Global Islamic Studies at George Mason University and the Maydan.