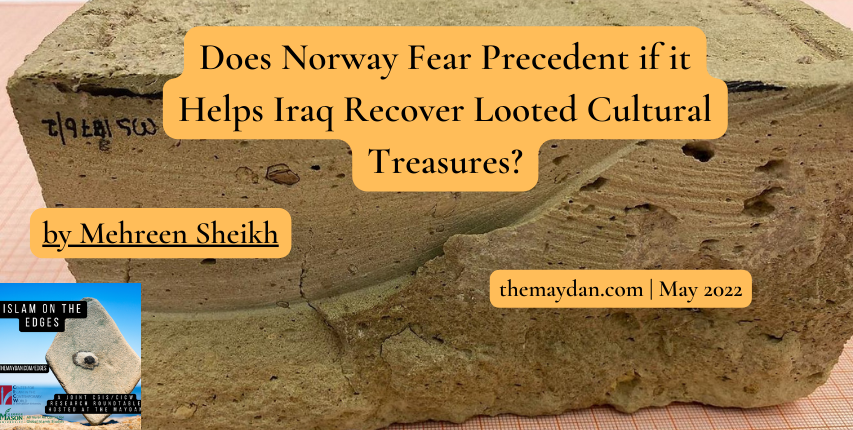 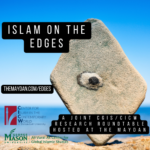 This essay is part of the Islam on the Edges research portfolio hosted on the Maydan as a collaboration of the Center for Islam in the Contemporary World at Shenandoah University (CICW) and the Center for Global Islamic Studies at George Mason University (CGIS). Learn more at themaydan.com/2022/01/edges/ and submit pitches to publish@themaydan.com.

Recently, the Norwegian Ministry of Culture published a comprehensive report on parts of the Schøyen Collection. The Collection, which is owned by the Norwegian collector Martin Schøyen, is based in London and Oslo and contains over 20,000 manuscripts. The interdisciplinary report, which was ordered after Iraq demanded the return of several historical objects in the Schøyen Collection, concludes that the objects should be returned to the country of origin because they lack proper documentation confirming their legal export from Iraq.

The report also presents evidence that several hundred cuneiform scrolls and incantation bowls from ancient Mesopotamia in the Schøyen Collection largely stem from modern looting, smuggling and illegal trading. After the publication of the report, Schøyen’s lawyer announced that “there will be plenty of space in the museum’s display and storage rooms” if the Museum of Cultural History should start to investigate other objects that form their collections in the same manner. Schøyen made a similar statement when the Norwegian National Authority for Investigation and Prosecution of Economic and Environmental Crime seized the objects: “If these [objects] were to be returned then around half of the large museum collections in Europe and the United States must also be returned. At the same time, refusing a clear request from Baghdad, the Norwegian Ministry of Culture  has announced that it will not assist Iraq in the further process. The experts behind the report are critical of the fact that the Norwegian authorities will not fulfill their international obligations.

“The fear of setting precedent is frequently used as an argument against the return of cultural objects to the country of origin.”

The fear of setting precedent, i.e. “to decide something that will be used as an example or rule to be followed in the future”, is frequently used by collectors, institutions of knowledge, politicians and researchers, as an argument against the return of cultural objects to the country of origin. According to researcher and political scientist Pierre Losson at Columbia University, there is a widespread attitude among Western professionals and politicians to avoid setting a precedent through return agreements. The fear is that Western museums and collections will be emptied of valuable cultural objects and that this will mean the end of museums and large collections. This fear also seems to apply to Norwegian cultural authorities.

The main justification used in this context is that Western actors are best suited to preserve and research other countries’ cultural heritage. This argument is also foregrounded in the controversial statement of The Declaration on the Importance and Value of Universal Museums from 2002, a declaration that 19 Western museums signed and published to justify why they would keep large, important archaeological treasures rather than return them to their country of origin. On the Schøyen Collection’s website, we find an echo of the latter statement: “The objects are not perceived as owned by the Schøyen Collection and its owner, who now has the privilege of storing them. Nor are they owned by one particular nation, people, religion, or culture, but by all of humanity. They are the common property of the whole world.”

“The main justification used in this context is that Western actors are best suited to preserve and research other countries’ cultural heritage as well.”

But the inquiry into the Schøyen Collection shatters the myth that Western actors are best suited to preserve and carry out research on other countries’ cultural objects. The impression one is left with after reading through the report from the Museum of Cultural History stands in stark contrast to the recognition and honor Schøyen expresses on his website for the cultural objects and their universal role and value. According to the report, the collector and his team have not been able to publish credible and complete documentation on where the objects come from, how and when they were exported from Iraq, or their ownership history. It appears from the report that the Provenance Statements have often been changed and adapted as needed, and that they often differ from established facts on their provenance. The Schøyen report also points out that the researchers associated with the collection acknowledge in their publications that the cuneiform material largely originates from modern looting in Iraq. Government documents about the illegal trade in cultural objects identify Iraq as a country that is particularly vulnerable to looting and crime: “Where stolen items from museums or other cultural institutions, along with looted items from archaeological sites, are smuggled out and sold in illegal markets in the West and elsewhere. This helps to obtain illegal income, which can be used to finance weapons and support extremist groups.”

From the Schøyen report, it may appear that Martin Schøyen largely obtained the historical objects in question through dubious dealers and smugglers. According to one of the experts behind the report, “the objects are stolen goods – which Schøyen is aware of.” The above examples indicate a lack of consideration for international conventions and national law on the part of the collector, his team and the researchers related to the collection. This has also been ascertained in several media reports and studies published during the last two decades about the Schøyen collection. For example, an important documentary program Skriftsamleren (2004) revealed that many of the Buddhist writings in the Schøyen Collection were smuggled out of Afghanistan before the Taliban came to power. This contradicts Schøyen’s official claim that the manuscripts had been rescued from the Taliban. The program also revealed that part of the collection belonged to Pakistan, which has strict laws against the looting and smuggling of cultural objects.

“The inquiry into the Schøyen Collection shatters the myth that Western actors are best suited to preserve and conduct research on other countries’ cultural objects.“

In addition to the problematic legal aspects of the Schøyen Collection, the Schøyen report also sheds light on several ethical issues regarding the enterprise. One of the most shocking sections of the report details how disrespectfully and ruthlessly Schøyen, researchers and other professionals associated with the collection have behaved in dealing with Iraq’s cultural and historical heritage. According to the experts who examined the objects, Schøyen or his team have inked or sketched the collection number and Schøyen’s initials into the objects. Some of the objects have been harmed due to moisture-related damage because they have not been stored properly. Several of the objects have been destroyed due to poor preservation practice. As stated in the report: “Schøyen, academics and institutions have been directly involved in irreversible alterations and destruction of the Iraqi materials (baking, breakage, crumbling, marking).” The experts recommend that “the implications of destroying another state’s cultural heritage should be assessed.” Given that Schøyen has stated that the objects are not perceived as owned by the Schøyen Collection, but by mankind, the careless handling is startling.

In contrast to the above descriptions, Voice of America describes how men and women in Iraq and Syria do everything they can to secure and preserve their cultural heritage. Both volunteers and professionals in these war zones risk their lives to secure, document and preserve historical artifacts and excavation sites. According to Michael Dant, a professor of archeology at the University of Boston, these people risk both beheading and torture from militant extremists.

In an article in Columbia News, Zainab Bahrani, a professor of archaeology at the University of Columbia who assists Iraq with the preservation of cultural monuments, describes the courageous efforts of the participants at a seminar in Istanbul on the preservation of cultural monuments. As Bahrani puts it, most of the archaeologists at the seminar were from conflict areas such as Iraq and Syria. Those who came from Syria had crossed the border by going through a very dangerous area. After the seminar, they immediately went back to continue the work of securing excavation sites and museums. As Bahrani points out, there is this idea that ancient Mesopotamian sites represent global cultural heritage. Although this is true, she believes that we have forgotten that this is the cultural heritage of the people who actually live there, and who feel a special connection to it. “We’ve formed this separation so much that statements are made about the protection of the heritage without giving too much thought to the people,” she says.

According to Losson, who has done extensive research on the issue of return and restitution, the return of cultural objects to the country of origin does not mean the end of the museums and large collections. He describes this argument as both Western-centric and patronizing. In his opinion, the returned objects from Western museums and collections will fill exhibitions and museums in their country of origin, where they will be taken care of, studied, used for educational purposes and interpreted by experts who can secure indigenous narratives associated with the objects.

The Iraqi government is currently considering a lawsuit against Martin Schøyen in an effort to retrieve the cultural objects, but the consequences may be far more wide-reaching. As indicated in the Schøyen report, “the implications of destroying another state’s cultural heritage should also be assessed.”