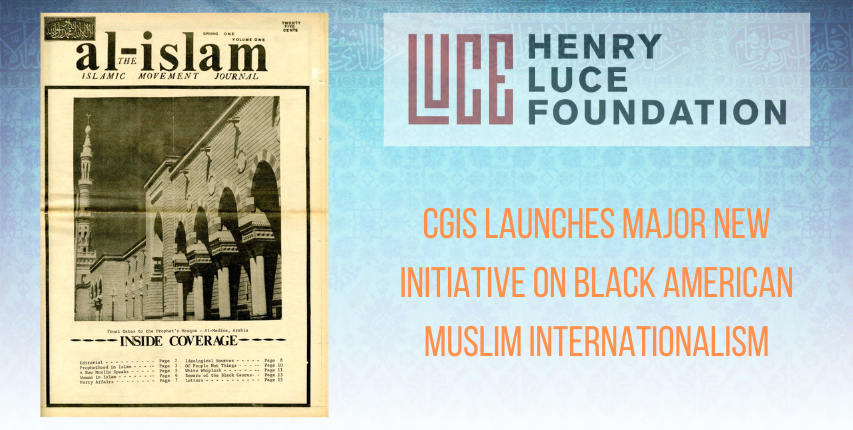 The Ali Vural Ak Center for Global Islamic Studies (CGIS) is pleased to announce the launch of the Black-American Muslim Internationalism Project (BAMI), made possible by a generous grant from the Henry Luce Foundation.  The growth and cultural relevance of Islam in the Black American community over the 20th century has few historical parallels. This project helps capture the historical significance and legacy of the African American Islamic tradition and its contribution to global Muslim history.  It does so by working in collaboration with leading university-based scholars as well as a network of community-based historians in three cities (the Washington DC area, Philadelphia, and Atlanta) to develop a multi-tiered research and programming initiative that can influence academic and public narratives around religion, race, and identity while also filling current gaps in the scholarly record.

BAMI will be housed at the Center for Global Islamic Studies at George Mason University (CGIS) and is funded through a special initiative under the Luce Foundation’s Religion and Theology program focused on Advancing Public Knowledge on Race, Justice, and Religion in America. The Director of CGIS, Professor Peter Mandaville and an Advisory Committee consisting of Ms. Aisha al-Adawiya, formerly of the Schomburg Center for Research in Black Culture; Dr. Abbas Barzegar, CGIS; Dr. Youssef Carter, University of North Carolina; Dr. Nisa Muhammad, Howard University and Dr. Ahmet Tekelioglu of CGIS will oversee the project and collaboratively shape its research agenda.

“African American Muslim experiences internationally are vast, diverse, and terribly under researched. I’m thrilled that George Mason’s Center for Global Islamic Studies is investing time and energy into exploring this nearly lost legacy. This project will help future generations across this country and beyond better understand the global interconnectedness that makes up our society.” – Aisha al-Adawiya, project advisory committee member, formerly of the New York Public Library’s Schomburg Center for Research in Black Culture

By centering the voices and experiences of community members, local historians, and other experts, BAMI will advance public knowledge while also yielding significant impact within academic communities through a range of activities and deliverables, including: public and academic-facing workshops & convenings; online discussion and debate forums on the Maydan digital publishing platform; public lectures; training workshops on curriculum development and pedagogical application; archive-building research in collaboration with community-based historians; and a public-facing project website organized around a long-form interactive essay on Black American Muslim Internationalism. This project builds on the After Malcolm Archive led by Advisory Committee member Abbas Barzegar, another Mason and CGIS-supported initiative aimed at promoting scholarly engagement around the historical African American Muslim experience and the preservation of its history through a digital archive of community and cultural production.

More details about this major new initiative will be available soon via a dedicated project website.