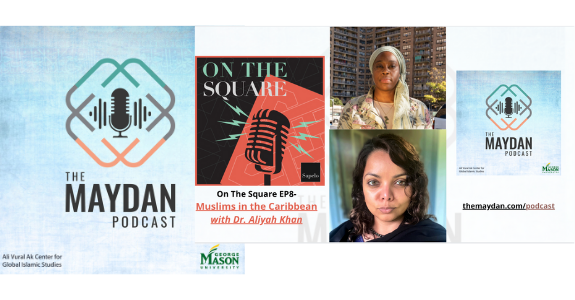 The Maydan Podcast · On The Square EP8 – Muslims in the Caribbean

In this episode of On The Square, Sapelo Square Senior Editor Su’ad Abdul Khabeer speaks with Dr. Aliyah Khan, author of Far from Mecca: Globalizing the Muslim Caribbean, about the deep Muslim history of the Caribbean and how the Muslim experience is shaped by the complex racial dynamics of the region. Khan narrates the history of Muslims in the Caribbean who are primarily the descendants of enslaved Africans brought to the region during the transatlantic slave trade and descendants of indentured laborers from the Indian subcontinent brought to the Caribbean in the 1830s. She describes how, despite the long history of the two groups, Islam is seen as religion of Indo-Caribbean people and how that and the more recent Arabization or Salafization of Caribbean Islam impacts Muslim identity. The conversation looks at how broader racial tensions and colorism in the postcolonial Caribbean shapes the relationships between Afro-Caribbean and Indo-Caribbean Muslims and what those relationships look like when Caribbean Muslims immigrate to the United States. The discussion touches on the annual Hosay commemoration,  the 1990 coup in Trinidad and the consequences of the wholesale adoption of US 9/11 discourse in the Caribbean. Khan also reflects on what is it like to be a Muslim academic and what Blackness and Black people mean to her work as a non-Black person.

To the question, “If Black Islam had a theme song, what would it be?,”  Aliyah chose My Grandfather was a Muslim by Khaled Siddiq.

Aliyah Khan, PhD is an associate professor in the U-M Department of Afroamerican and African Studies, and the Department of English Language and Literature. She is also Director of the Global Islamic Studies Center (GISC) at the International Institute. Dr. Khan specializes in postcolonial Caribbean literature and the contemporary literature of the Muslim and Islamic worlds, with a particular focus on the intersections of race, gender, and Islam in the hemispheric Americas, including in immigrant communities in North America. She has also presented and taught widely in the field of Muslim representation in comics and graphic novels. Far from Mecca: Globalizing the Muslim Caribbean, Dr. Khan’s recent book, is the first academic monograph on the literature, history, and music of Caribbean Islam, focusing on Guyana, Trinidad, and Jamaica, and on enslaved Muslim West Africans, indentured Indian colonial sugar plantation laborers, and their Muslim Caribbean descendants.

On The Square’s theme music was created by Fanatik OnBeats.

Artwork for On The Square was created by Scheme of Things Graphics.