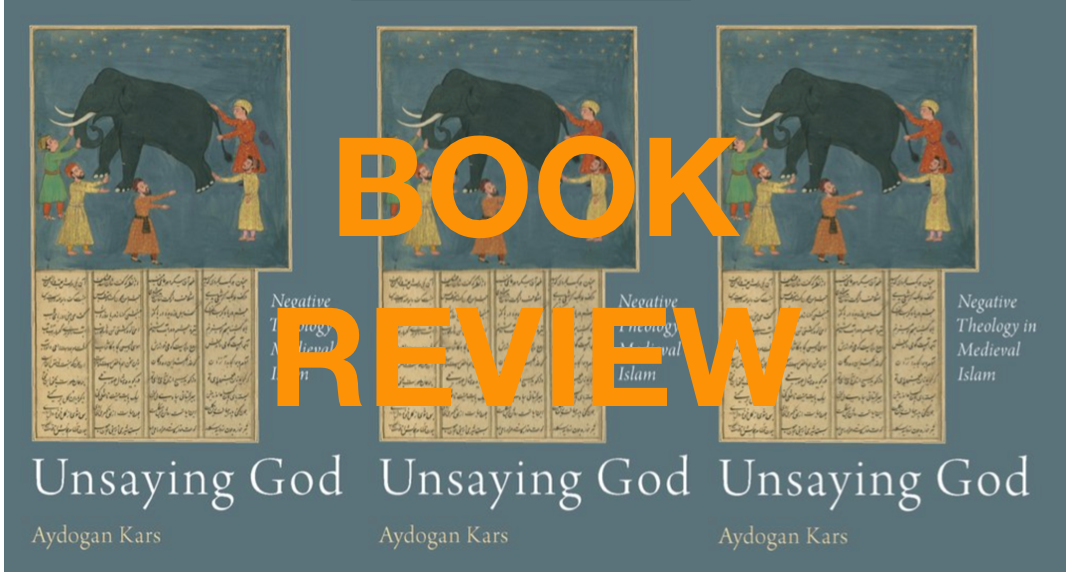 Unsaying God presents the first book-length study of negative theological strategies in Islamic thought, with a focus on four apophatic paths (techniques of self-negation in theology) that emerged in the first seven centuries of Islam and diffused into the thirteenth century Sufi trends. Aydogan Kars’s pluralistic and comprehensive examination of alternative negative theologies in Islamic thought is built upon extensive textual evidence from Arabic and Persian sources which he analyzes with a historicist and contextualist approach. Some of the core arguments of Kars in the book, include the following:,that negative theology had diverse and changing applications and manifestations in the first seven centuries of Islam; that the traditions of negative theology were parts of connected historical networks and shared apophatic strategies as well as epistemological and cosmological assumptions; that the apophatic discourse of the unlimited (God) is still a discourse with limits, hence its dialectical-logical underpinnings; and that the multiplicity of apophatic paths is not only seen among various trends of a single religion, but can be located within trans-religious theological networks.

“Aydogan Kars’s pluralistic and comprehensive examination of alternative negative theologies in Islamic thought is built upon extensive textual evidence from Arabic and Persian sources which he analyzes with a historicist and contextualist approach.”

In the introduction to his work, Kars poses several questions that define the parameters of the study. In his attempt to pin down what can be considered negative theology in Islam, Kars points out that the Muʿtazilites, the Islamic theological school most associated with negative theology, proposed a negative theology only for the divine attributes, whereas they vehemently defended the knowability of God’s essence. According to Kars, an attempt to find the negative theology in Islam as an essentialized category will be doomed to fail. Keeping the distinction between the divine essence and the divine attributes in mind, as well as the ambiguity of the blanket term “negative theology,” Kars studies the multiple apophatic strategies in approaching God’s essence/ipseity, “the motherland of theo-logy,” and emphasizes the context-dependent character of self-negating speech performances. Another equally important investigation found in the book is the connection of apophaticism to Sufism and/or mysticism, which are, according to Kars, neither equivalent nor necessarily concomitant. According to Kars, the idea of the equivalence of mysticism and apophaticism harkens back to a certain and widespread reading of the Christian religious thought, which itself needs a re-evaluation. Within the Islamic thought, or even in Abrahamic contexts in general, different apophatic approaches to theology could keep mysticism at arm’s length, while mysticism, due to its ambition for experiential or visionary knowledge, was prone to undermine apophaticism that upheld the unknowability of God. 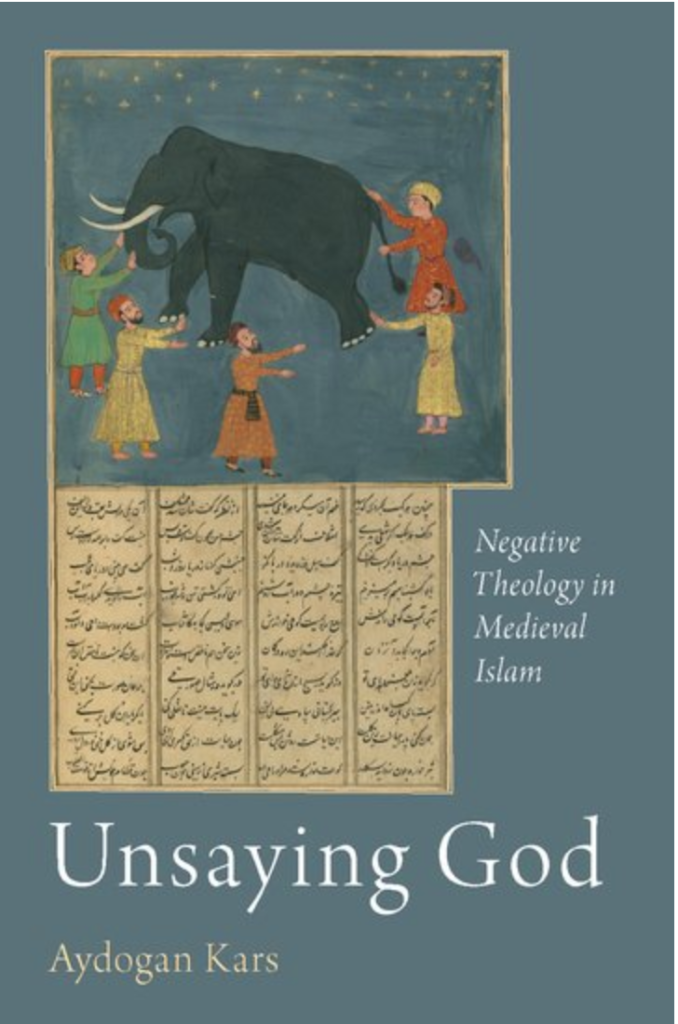 Each of the four chapters (which gradually become lengthier) focuses on one of the four apophatic paths and they are arranged according to a rough chronological order. As the first chapter illustrates, Ismāʿīlī apophaticism for the divine essence utilized the two strategies of repetitive negation and double-negation and placed God’s essence beyond all discursive possibilities, including negation itself. While the repetitive negation was formulated as “God is not X; God is not not-X”, the double negation, framed with joint denial as “Neither (God is X), nor (God is not-X),” was more popularly employed than the former. Kars’s discussion culminates in an analysis of the Persian Sufi Naṣīr al-Dīn al-Ṭūsī’s writings which instantiate the interaction between Sufism and Ismāʿīlism through a blending of Sufi themes and apophatic performances.

“Each of the four chapters (which gradually become lengthier) focuses on one of the four apophatic paths and they are arranged according to a rough chronological order.”

The third chapter, on paradoxical apophaticism, studies Sufis who expressed the unknowability of God’s essence through paradoxes. The three main strategies that characterize paradoxical apophaticism are the balance between divine transcendence and immanence, the symmetrical and non-hierarchical linguistic approach that disqualifies both negative and positive languages, and the dialectical logic that undermines the propositional discourse. Bolstered by references to paradoxes in literature and Sufi thought, one of the main theses of the chapter is that the apophatic paradoxes were rule-following performances that assumed a deeper dialectical ground which transcend propositional logic, instead of violating its meta-principles, especially the law of noncontradiction, and maintaining an anything-goes position.

There were, however, Sufis who did not embrace paradoxical apophaticism and preferred to approach God’s essence amodally (i.e. without ascribing a modality), and approach which was more in line with some traditionists and Ashʿarites. Amodal apophaticism is the focus of the fourth and lengthiest chapter. Kars identifies two divergent uses of the anti-interpretivist bi-lā kayfa (“without [asking] how”) formula in early Islamic thought: transcendent anthropomorphism and apophaticism. Kars’s recognition of Qushayrī’s role in reading the early Ashʿarī anti-interpretivism into the earlier Sufis, who were actually active interpretivists, is noteworthy. A similar process is observed by Kars in Western/Andalusian mysticism, through which earlier interpretivist approaches were later replaced by bi-lā kayfa positions.

Overall, the book’s contribution to religious studies is palpable in its critical references to contemporary readings of apophaticism, such as those of Jacques Derrida, Denys Turner, and Jean-Luc Marion, especially regarding their monolithically post-structuralist presumptions, which include the identification of apophaticism with a paradoxical approach, the divestment of paradoxical apophaticism from its rule-following and dialectical-logical character, and the equation of apophaticism with mysticism. As for Islamic Studies, the framework that Kars proposes for classifying and interpreting Muslim apophatic strategies in approaching the divine essence is a one-of-a-kind contribution. His rich use of primary texts demonstrates just how effective such a framework can be.

“However, a critique must be raised regarding the author’s decision, in the fourth chapter, to tie the issue of the knowability/unknowability of God’s essence to the question of the accessibility of scriptural meanings.”

However, a critique must be raised regarding the author’s decision, in the fourth chapter, to tie the issue of the knowability/unknowability of God’s essence to the question of the accessibility of scriptural meanings. After the first three chapters successfully capture the core features of the three apophatic paths, the last chapter conflates two related problems, one theological and one scriptural-hermeneutical. The interrelatedness of these two issues is unlikely to justify the mentioned shift of focus, for neither does an anti-interpretivist (bi-lā kayfa) hermeneutical position necessarily imply an apophatic approach, nor does an interpretivist scriptural reading entail the knowability of God’s essence. The case of Fakhr al-Dīn al-Rāzī, who fell outside the scope of the book – presumably because of his relative distance from the mystical discourse–, only proves the consistency of a strongly interpretivist hermeneutics and an apophatic theology of divine essence.[1] It is equally conceivable that a thinker adopts a non-cognitive, anti-interpretivist scriptural hermeneutics for certain Qurʾānic statements (not all of which pertain to the divine essence), while also arguing the knowability of God’s essence.

Secondly, the conclusion that “a given scholar could adopt more than one of these apophatic paths” (298) provokes the methodological question of expectations of consistency. A pre-modern thinker might have had a different notion of philosophical consistency than ours, and that notion might seem to imply contradictions for us. But this can hardly excuse a partial coverage of a thinker’s oeuvre, an example of which is seen in Kars’s concentration on only some texts from Ghazālī’s output to examine the latter’s attitude toward scriptural interpretivism, with a total omission of Qānūn al-Taʾwīl on the theory of interpretation.[2]

“Through employing an external, but not inapplicable, term and category, one is able to question the basic, and often unstated, assumptions of theological and philosophical doctrines, which usually remains unfeasible in a characteristically descriptive inquiry. From this respect too, Unsaying God will likely open new paths for Islamic thought in general.”

Twenty-five years after Michael Sells’s creative readings of Ibn al-ʿArabī’s apophaticism,[3] Kars both revises the former’s theses on the Sufism-apophaticism dynamic and takes the academic study of negative theology in Islam to a new level by convincingly presenting his major arguments on the subject. Together with Livnat Holtzman’s recent Anthropomorphism in Islam, which concentrates mostly on ḥadīth rather than pure theology,[4] Unsaying God is an insightful example of recent thematic studies in the field. Furthermore, Kars’s use of a theological category (apophaticism) that has no direct and single equivalent in the terminological map of classical Islamic thought is likely to probe so far overlooked elements, which might have gone unnoticed since the unfolding of Islamic thought. Through employing an external, but not inapplicable, term and category, one is able to question the basic, and often unstated, assumptions of theological and philosophical doctrines, which usually remains unfeasible in a characteristically descriptive inquiry. From this respect too, Unsaying God will likely open new paths for Islamic thought in general.

Mehmet Emin Gulecyuz is a PhD student in Islamic Studies at the University of Chicago Divinity School. His research is focused on the interactions between the traditions of Islamic theology (kalām), philosophy, and mysticism on discussions of divinity (ilāhiyyāt), ontology, and epistemology. The historical concentration of his current research is on fourteenth- and fifteenth-century theologians in and around Anatolia and their influence on later Ottoman intellectual trends. He holds BA degrees in Islamic and Religious Studies and in Philosophy as well as an MA degree in Islamic Theology (kalām) from Istanbul 29 Mayis University, and an MA in Islamic Intellectual History from Freie Universität Berlin.

* The author first presented this review at the 2019 Graduate Student Book Review Colloquium on Islamic and Middle Eastern Studies in 2019 organized by Ali Vural Ak Center for Global Islamic Studies at GMU.

[2] Although Unsaying God is not primarily about scriptural hermeneutics, this question is provoked by the author’s spilling so much ink on the subject. For a new edition of the mentioned text see Gazzâlî, el-Kânûnu’l-küllî fi’t-te’vîl = Tevile Dair Genel Kanun, in Gazzâlî, Kelâm ve Halk, edited with a parallel Turkish translation by Mahmut Kaya & M. Cüneyt Kaya (Istanbul: Klasik, 2018), pp. 103-116. A study of Ghazālī’s theory of interpretation is found in Frank Griffel, Al-Ghazālī’s Philosophical Theology (New York: Oxford University Press, 2009), chapter 4.