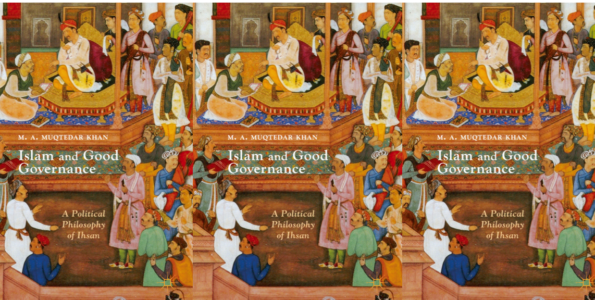 The outbreak of the Arab Spring clearly demonstrated a need to reformulate the relationship between Islam and politics. This need has been reflected in a growing body of literature that seeks to re-conceptualize Islamic political thought, both in Muslim-majority contexts and the Western academy. In Islam and Good Governance: A Political Philosophy of Ihsan, M.A. Muqtedar Khan, a prominent scholar in Islam and International Relations with a focus on Islam and democracy, aims to provide a unique contribution to this body of literature. He attempts to formulate a contemporary Islamic political philosophy on the basis of Sufism. He does so on the basis of value of ihsan which Sufis often equate with Sufism. Ihsan roughly means “to do beauty” and was defined by the canonical hadith of Gabriel as “to worship god as if you see him.” 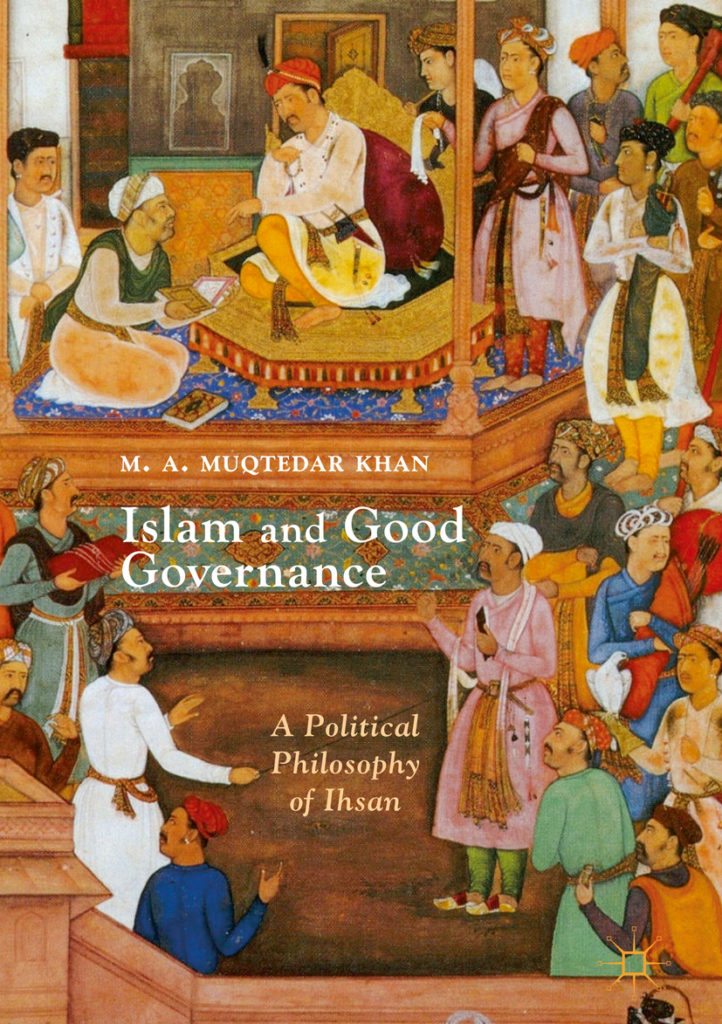 Islam and Good Governance is composed of six main chapters. Chapter 1 serves as a general introduction to the book. Chapter 2 argues that classical scholars interpreted Sharia texts  in a way that neglected the compassionate message of the Prophet. Chapter 3 categorizes Muslims’ responses to modernity in four categories: traditionalist, modernist, Islamist and secular; Khan concludes the chapter by staking his own position, in favor of the modernist response. Chapter 4 explores past and present interpretations of ihsan, which Khan argues overwhelmingly fail to realize the true potential of ihsan, while Chapter 5 presents his own understanding of ihsan as a worldview in which the desire to do beautiful acts extends even to the socio-political realm. In Chapter 6, Khan presents “a critical genealogy of Islamic political thought,” arguing that as a whole the Islamic political tradition has privileged power and law over process and have sought to use the state to enforce religiosity. Finally, Chapter 7, the culmination of the preceding chapters, describes what Khan sees as a potential transition from today’s real-politik to what he calls a “politics of Ihsan.”

Khan commits a number of errors common to Islamic studies due to the over-politicization of the field in the “War on Terror” environment. The first of these is to create a false dichotomy between Islamism (and Salafism) on the one hand, and Sufism on the other. This dichotomy results in essentialized portrayals of both Islamism and Sufism, usually with the former portrayed negatively and the latter positively. Khan fully buys into such an essentialized dichotomy, and though some of his critiques of Islamist tendencies are quite accurate (for example that Islamists tend to turn religiosity into a handful of litmus identity tests), he not only paints too wide a brush but also a painting that is possibly antiquated. One gets the sense      simply reading Sayyid Qutb will provide all there is to know about contemporary Islamists. One would wonder as to how seriously one can consider any prominent Islamist party today to be directly pursuing an “Islamic state” and that is not even to mention the various distinct manifestations of Islamism in the past. This lack of appreciation of the evolution and diversity of Islamism can be seen in Khan’s discussion on Abdessalem Yassine. While by Khan’s own admission Yassine is the thinker whose conceptualization of ihsan comes closest to his own, Khan fails to mention that Yassine is not just a Sufi, but very much an Islamist as well.

A second trope of War on Terror security studies that the book suffers from is its portrayal of the fourteenth century scholar Ibn Taymiyya. In Khan’s narrative, Ibn Taymiyya is responsible for Islamism and its obsession with the “Islamic state,” as he was the first to argue for the religious necessity of the state. This is a grossly inaccurate claim. The view that the state was necessary to uphold religion was a matter of consensus, mostly due to the state’s role in collecting of taxes, protecting Muslim lands and upholding collective rituals. Moreover, Sufi thought did not necessarily disagree with this. Consider Ghazali, the scholar most responsible for bringing Sufism into Islamic orthodoxy – his opinion is in some ways even more extreme than Ibn Taymiyya’s as he claimed the Caliphate was necessary and without it, all of the Sharia and all legal contracts would be invalid. Khan further claims that Islamists get the notion that a state is Islamic only because it implements Islamic law from Ibn Taymiyya. However, the position that it was the application of Sharia that made a certain territory “Islamic” is not only a widely recognized view before Ibn Taymiyya, but indeed the majority opinion within both the Hanbali and Maliki schools of law in their debates on how to define dar Al-Islam. In fact, historically, the debate was not whether the Sharia should or should not be applied, but rather how to define “application” and its minimum bar. However, while Ibn Taymiyya may be a convenient punching bag given the large amount of literature that seeks to create a genealogy from him to ISIS and Al-Qaeda, the simple fact is that the caliphate and Sharia were historically taken for granted and premodern debates that took place for the most part did not question this framework, but rather took place within it.

The essentialization of Islamism carries over into Khan’s portrayal of states in Islamic history. He writes:

“Islamic jurists have for centuries glorified Islamic law and the states that enforce it. The philosophy of freedom posits state authority as more or less a necessary evil and the state as a potential villain that can become tyrannical and must be restrained by constitutional and other means (such as cutting taxes and resources available to it). The philosophy of divine law sees the state as a hero that alone can bring justice by implementing divine law and therefore is both necessary and desirable.” (236)

This passage exemplifies how Khan’s discussion on the Islamic state also suffers from false comparisons to the modern state. While Khan regularly refers to pre-modern polities as “states,” what he is referring to is the rulers and their militaries, i.e. the executive branch, whereas both the legislative and judiciary are -theoretically – beyond the power of the individual ruler and are mandated by the Sharia as interpreted by Muslim scholars: the ulama. In light of the trauma of both the failed rebellions to reinstate the “Rashidi” paradigm of the caliphate  in the first two centuries and the mihna, in which the Abbasid caliphs tried to enforce the Mutazili view of the Qur’an’s createdness by threat of death, the ulama and the rulers reached a power-sharing agreement; as long as the rulers did not interfere with interpreting the religion (and fulfilled their basic duties), the ulama would not delegitimize their power. That is to say, contrary to the ulama glorifying the state and seeking to use its power to enforce religiosity; rather, they largely viewed it as a necessary evil and saw themselves as the constitutional means to limit it.

It is precisely for this reason that Ghazali compared societies’ need for “states” to a Muslim lost in a desert who eats carrion: he does so to ensure his continued survival, but it is far from nourishing. It is on the basis of this reading of Islamic political history that Khan calls for his “society of muhsineen,” which he admits is basically just a liberal democracy. In this regard, it could be a useful exercise to think through Hallaq’s Impossible State (to which Khan gives a confusing perfunctory nod even though his own view of the state as a neutral “device” directly contradicts Hallaq’s argument that the modern state possesses its own metaphysic) and ask: to what degree is Khan’s “state of Ihsan” an impossible state precisely because it is modern? What if rather than the ulama for centuries ignoring the prophet’s message of compassion, it is precisely the degree to which Saudi Arabia and Pakistan are trying to “modernize” the Sharia that explains our collective lack of Ihsan in our politics?

“What if rather than the ulama for centuries ignoring the prophet’s message of compassion, it is precisely the degree to which Saudi Arabia and Pakistan are trying to ‘modernize’ the Sharia that explains our collective lack of Ihsan in our politics?”

Muqtedar Khan’s Islam and Good Governance makes a number of important points. For instance, I fundamentally agree that any contemporary Islamic political theory should focus more on governance than the structure of government and should take not just the letter of Islamic “law,” but the spirit seriously. Islam and Good Governance is at its best when it actually discusses good governance, suggesting, for instance, mandatory social service (as Khidmat-I Khalq or serving the creation), having Islam’s emphasis on forgiveness extend to debt forgiveness, or having bay‘a (oaths of political allegiance) institutionalized in the form of ballots (interestingly this last suggestion has also been forwarded by a number of Islamist intellectuals as Salman al-Ouda and Rachid Ghannouchi).

Unfortunately, any potential effectiveness of these suggestions is weakened by Khan’s broad generalizations and basic errors in Islamic political history. His argument for a contemporary Sufi theory of politics could have also been greatly strengthened by more engagement with the historical literature on how Sufis influenced and were influenced by the politics of their time, such as Omid Safi’s The Politics of Knowledge in Premodern Islam on the Seljuks or Hüseyin Yilmaz’s Caliphate Redefined: The Mystical Turn in Ottoman Political Thought.

Thomas Parker is currently doing his MA in Civilization Studies at Ibn Haldun University. His interests include Ottoman History and Islamic Political Thought and attempts to study Islamic sciences on the side.