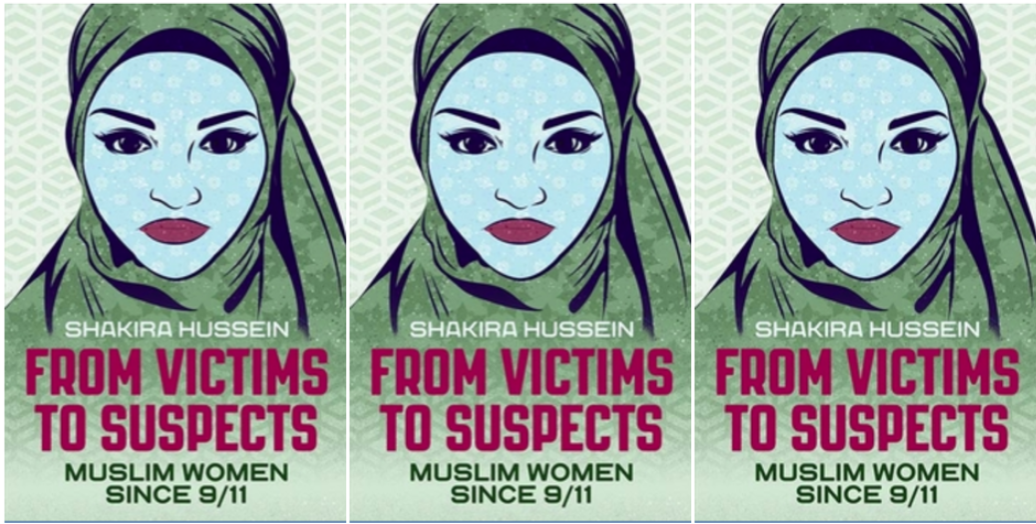 “A Muslim woman can only be one of two things, either uncovered, and therefore liberated, or veiled, and thus still, to some degree, subordinate. Can our bras, ties, pants, miniskirts, underwear, and bathing suits all be so easily arrayed on one or the other side of this divide? Can our daily activities and life decisions really be captured and understood within this logic of freedom or captivity? We need a way to think about the lives of Muslim women outside this simple opposition.” – Saba Mahmood & Charles Hirschkind[1]

The quote above uniquely captures the sentiment behind the opening scene of Shakira Hussein’s monograph, From Victims to Suspects: Muslim Women Since 9/11. She begins by recounting the events of a benefit gala performance of The Vagina Monologues in 2001, where Oprah Winfrey makes a guest appearance. There, Winfrey recites the poem “Under the Burqa,” written by Eve Ensler, and then in a dramatic sweep, proceeds to lift the burqa off a young member of the Revolutionary Association of the Women of Afghanistan (RAWA). For the Muslim woman, to unveil or disrobe is to be liberated and to maintain the veil is to remain oppressed. Hussein maintains that this duality ultimately relates to the binary subjections of “victimhood,” and later as “suspects,” that is attributed to Muslim women by Western discourse. 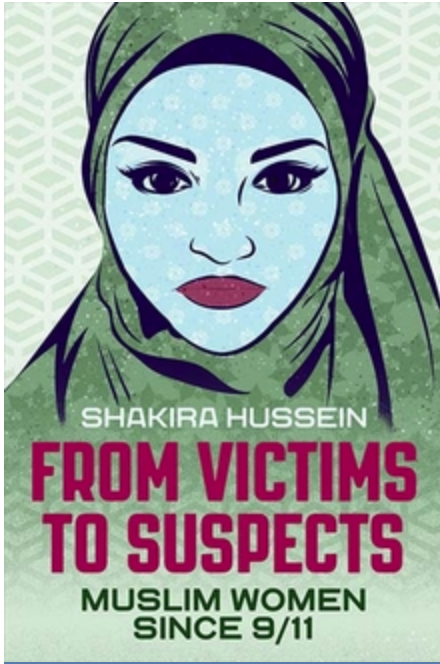 Throughout her monograph, Hussein argues that following September 11, 2001, there occurred a shift in the world’s perceptions of Muslim women. Henceforth, Afghan women were seen as “oppressed victims” who required “saving” from “oppressive” Muslim men and their governments. Hussein foregrounds that this rhetorical tactic ultimately laid the groundwork to justify imperialist policies and agendas of the West. She maintains that the West establishes Muslim women as victims of gender violence, racism, and misogyny; as well as possessors of identity; and defenders or “explainers” for their communities, while Muslim men are uniformly deemed as hypersexual and oppressive. By drawing on and analyzing interviews, media stories, images, her own experiences as well as the perspectives of other Muslim women—from Afghanistan, Pakistan, Europe, Australia, North America, and other places—Shakira Hussein maps an overt shift in Western rhetoric where Muslim women begin to be seen as active agents of “menace” through their wombs (i.e. by giving birth to future terrorists and sexual predators), through food (i.e. halal certification as “stealth jihad”), through their visible presence within the public sphere, and lastly through their participation in all-female wings of Islamist groups and as “jihadi brides.” Here, Hussein underlines that this transition from “victim” to “suspect” demonstrates the extent Muslimness has become racialized as well as the extent to which Western governments seek to surveil and police this “Other.” Furthermore, the book argues that when Muslim women fail to follow the gendered norms and expectations of the Western societies they reside in, they automatically become seen as accomplices of Muslim men, not victims—and the veil that once stood for oppression, now stands for terrorism.

“…Hussein underlines that this transition from ‘victim’ to ‘suspect’ demonstrates the extent Muslimness has become racialized as well as the extent to which Western governments seek to surveil and police this ‘Other.’ “

About the Author & Significance to the Field

As a research fellow at the University of Melbourne’s Asia Institute with doctoral training in sociology, Shakira Hussein is a regular commentator on topics such as gender, Islam, and multiculturalism. Her book serves as an invaluable contribution to her field and accounts for gaps in scholarship especially in regards to synthesizing, contextualizing, and theorizing current world events regarding Muslim women in order to trace how they have been subjected across time and space. Such a feat has never been done before, at least not with this level of comprehensiveness and for this reason, the work is a significant contribution to the academic scholarship on anti-Islamic hostility and its intersection with gender and imperial policies. In addition, Shakira Hussein’s easy-to-read, journalistic approach renders the work highly accessible—thus widening its audience from academics and scholars to lay-readers as well. Consequently, it can serve as an effective teaching tool for high school and undergraduate students.

From Victims to Suspects: Muslim Women Since 9/11 consists of an introduction, conclusion, and six content chapters. The introduction of the book contextualizes the main argument of the book and summarizes its contents. The first chapter, “Afghan Girls,” illustrates how the campaign to “Stop Gender Apartheid in Afghanistan” after 9/11 was appropriated to further the agendas of the “War on Terror” by encapsulating notions of feminism and militarism simultaneously. The second chapter is entitled “Candle in the Wind” and it details research from Pakistan, including the women’s wing of the Pakistani Islamist Party, Jamaat-e-Islami and analysis on the story of Malala Yousafzai. It illustrates how Western powers used the façade of women’s rights to education as a justification for policies such as invasion. The third chapter, “Shifting Perceptions,” traces the “Muslim Question” as the cause of hate crimes against Muslim women. These women refuse to be “rescued” and are thus considered to be agents of “Islamicization.” Ultimately, this leads to categorizations of “good Muslim women” (visibly veiled BUT educated, attractive, fashionable, fluent in English, and of middle-class background) and “bad Muslim women” (visibly veiled but do not fit the standards of the “good” category mentioned before)—ultimately determining those who are allowed to occupy the public sphere (i.e. palatable “victims”) and those who are not (i.e. “Islamicized aggressors”).

This dichotomization, Hussein says, promotes the inaudibility of the variety of voices of Muslim women. The fourth chapter entitled “Proxy Wars” explores the ways Muslim women’s clothing in the West serve as “proxy wars” in Western disputes over feminism—resulting in the emergence of Islamic and Muslim feminisms. The next chapter, “Invisible Menace,” delineates the ways in which Muslim women are viewed as a source of disruption to the public space through “stealth jihad” or the secret Islamicization of non-Muslim societies. Some of these “creeping Shariah”-esque fears include the popularization of halal certification, increased birth rates of Muslims in Western states, and a fear of unregulated immigration. Such a panic around food and reproduction inevitably leads Westerners to demand the surveillance of private Muslim spaces. The last chapter is entitled “’Jihadi Brides’ and Chicks with Sticks” and it continues the theme from the previous chapter of illustrating this shift of Muslim women as “victims” to active “agents of influence.” Finally, Shakira Hussein concludes that the deployment of the “Muslim Problem” extends to Muslim men as well and points to the ways they have been hypersexualized and demonized as predators, within the context of the European refugee crisis.

“(Hussein’s monograph) assumes a linear timeline in the shift from ‘victim’ to ‘suspect’…But perhaps in reality, this shift in the subjection of Muslim women is not linear at all, but instead like a pendulum, waving back and forth from being perceived as ‘victim’ to ‘victimizing’ depending on the specific political context of that time—in fact, sometimes even within the same incident.”

Hussein’s monograph breaks the image of Muslim women as silent and perpetually relegated to play the role of “explainers” and “defenders” to Western audiences. By extrapolating how the subjectivities of Muslim women are always already constructed for them by hegemonic Western discourse, particularly as a means to serve political agendas of the West, Hussein offers a way for the reader to think against such normative assumptions about Muslim women (and men).

However, this monograph does possess one important limitation.  It assumes a linear timeline in the shift from “victim” to “suspect.” Hussein organizes her book by stating that Muslim women were treated as victims and oppressed in the period leading up to and immediately after 9/11. Then, as the “War on Terror” advanced and more alt-right governments and politicians came to power in the West, the rhetoric changed to regard Muslim women as agential, suspicious beings. But perhaps in reality, this shift in the subjection of Muslim women is not linear at all, but instead like a pendulum, waving back and forth from being perceived as “victim” to “victimizing” depending on the specific political context of that time—in fact, sometimes even within the same incident. This can be seen through the example of Noor Salman, the wife of Omar Mateen who killed 49 people in a mass shooting at an Orlando nightclub in 2016. When it was first discovered that Mateen had a wife, she was first perceived as the “victim” of a mentally unstable Muslim man, then later, suspicion fell upon her as someone who was aiding and abetting her husband in the attack—labelling her as an extremist aggressor, and then finally, she was seen as a “victim” once again after being acquitted in the Pulse shooting in 2018. In this way, Muslim women are catapulted from one extreme to another across various spaces, all the while remaining “inaudible” (119) when they scream from the whiplash.

“Shakira Hussein accomplishes no small feat in From Victim to Suspect: Muslim Women Since 9/11. She manages to elucidate a thorough history of the way Muslim women are constructed through Western discourse and anti-Islamic rhetoric—all in one compact volume—thus producing a resource that shall prove invaluable to scholars, students, and activists alike.”

Hussein manages to elucidate a thorough history of the way Muslim women are constructed through Western discourse and anti-Islamic rhetoric, thus producing a resource that shall prove invaluable to scholars, students, and activists alike. Furthermore, Hussein elaborates that this book is for all Muslim women so it may help “lighten the[ir] burden of explanation” (xvi), a sentiment that hopes to not only challenge hegemonic, reductive perceptions about Muslim women, but also to perhaps allow them a sigh of relief at finally being heard.

Hina Muneeruddin is a doctoral student at the University of North Carolina at Chapel Hill in the Islamic Studies track of the Religious Studies program and currently pursuing her graduate certificate in Women and Gender Studies. Her research lies at the intersections of Islam, gender, race, affect, and performance. More specifically, she is interested in the quotidian scenes of becoming of American Muslim femme.

** The author first presented this review at the 2019 Graduate Student Book Review Colloquium on Islamic and Middle Eastern Studies in 2019 organized by Ali Vural Ak Center for Global Islamic Studies at GMU.