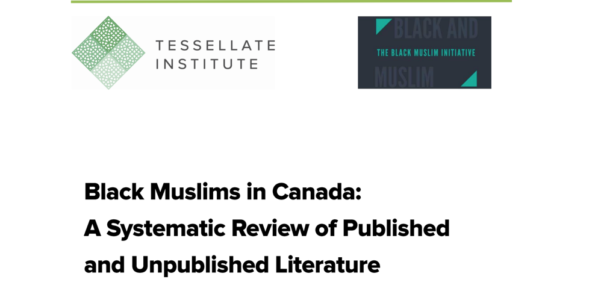 On February 7, 2019 the Black Muslim Initiative and the Tessellate Institute launched the findings from a systematic review of published and unpublished literature about Black Muslims in Canada. The project began in the summer of 2018 and was largely prompted by a growing recognition that in spite of the visibility of Black Muslims in Canada, there was no consolidation and analysis of existing research that has been done by and with these communities. Cognizant of this context and after being chosen to lead the research project, I suggested a systematic review because it can be leveraged to produce high quality research evidence on topics that have diverse information sources. Systematic reviews are also useful for gauging research landscapes and gaps in knowledge which are important to ascertain before embarking upon a larger research study on a subject of interest.

As a Black Muslim woman born in Canada, I also had a vested interest in this topic and in utilizing an approach that would be both accessible and beneficial to the communities I am a part of and would share this work with. Over the last 10 years I have engaged in research that centers groups that I share an identity with, and Black women and Black communities in the Caribbean and Canada have been my primary focus. However, a project about Black Muslims in Canada was perhaps one of the most personal studies that I have worked on to date. My parents were among the waves of Black people who converted to Islam in the 1960s and 1970s in North America and the Caribbean, respectively. As a result I was raised in a tight-knit Black Muslim community, and also among non-Black Muslims from nearly every corner of the world. Immersed in both realities, I knew that Muslims are diverse and that Black Muslims are no exception. Conducting a systematic review of work about Black Muslims in Canada not only fulfilled my research interests, but it also addressed a personal investment in exploring Black Muslim trajectories in the country. Over the next several months, I met regularly with a research team that was comprised of representatives from the Tessellate Institute and the Black Muslim Initiative. The team was deeply engaged in the systematic review process: from determining the research questions, to unpacking the review’s preliminary findings, and making decisions about how the research would be shared with the community.

“The vast majority (94 percent) of existing information about Black Muslims in Canada was about 1stand 2ndgeneration Somali communities. The existing body of work covered a range of topics including immigration and integration in Canada, schooling, and women’s health.”

The findings of the systematic review contained several surprises and a few anticipated results. It was unsurprising that the vast majority (94 percent) of existing information about Black Muslims in Canada was about 1stand 2ndgeneration Somali communities.

The existing body of work covered a range of topics including immigration and integration in Canada, schooling, and women’s health.   An unanticipated surprise in that body of work was that most of the published and unpublished research on Somali communities was done by Somali people, and much of this scholarship was produced by graduate students in Masters and PhD programs. This uptake in research by Somali people about Somali communities is likely an outcome of concerted efforts by members of the community to control narratives and information being produced about them. That this work was done by early career academics and researchers is also an important distinction to make because it indicates that a new generation of scholars are invested in working within their communities to document their stories and privilege their experiences in ways that both challenge cultural assumptions about Blackness in Islam, and also affirms their experiences of systemic barriers in sectors like education, housing, and healthcare that many face after immigrating to Canada.

Another unanticipated discovery was that most of the research on Black Muslims in Canada used qualitative methods to investigate topics of interest. The significance of this finding is further pronounced when we consider the significance of oral traditions in many Black cultures across Africa, the Caribbean, and the Americas. When used carefully, qualitative research techniques like interviews and focus groups can be useful tools to extract the narratives people tell which highlight similar and divergent stories, and describe complexities of racial identity as it intertwines with religious affiliation. This finding from the systematic review is also significant because it suggests that a methodological framework for Black Muslim inquiry that uses qualitative methods is being developed, and which has been utilized across disciplines. However, I am careful to avoid restricting Black Muslim research to the qualitative domain, particularly with the knowledge of several studies that were also retrieved in the systematic review that used quantitative methods alone or mixed them with qualitative approaches. That said, there was an undeniable methodological trend across the existing literature, and among groups of Black Muslims which indicated a propensity to qualitative inquiry.

Gaps in Research on Black Muslims in Canada

One of the most significant gaps that was uncovered in the systematic review was the lack of data about non-Somali Black Muslims in Canada. Although I anticipated finding little research about these groups, it was jarring that only six percent of the literature focused on Black Muslims in Canada who hail from the islands in the Caribbean, the Americas, and from countries in West, South, Central, and North Africa.

“Only six percent of the literature focused on Black Muslims in Canada who hail from the islands in Caribbean, the Americas, and from countries in West, South, Central, and North Africa. To put this percentage into context, this amounts to just two papers.”

To put this percentage into context, this amounts to just two papers. Equally concerning is that this gap exists in spite of research that suggests enslaved Black Muslims from West African countries were likely the first Muslims to arrive to Canada as it fashioned itself into a settler colonial state. The lack of data about non-Somali Black Muslims also suggests that there is a larger issue about dominant narratives and imagery of who Black Muslims are in Canada, and who becomes excluded from such depictions. While it is undeniable that Black Muslims come from many geographic regions, linguistic backgrounds, schools of thought, and ethnicities, the lack of research and work focused on non-Somali Black Muslims prevents more in-depth investigations about the diversity of our communities.

The published and unpublished work that did focus on Black Muslims who were not Somali amplified the need for further research about these groups, and also for increased information about Black Muslims who align with Islamic sects that that are not Sunni. On this point, Delice Mugabo’s (2016) Masters thesis presents the only research that highlighted the role of the Nation of Islam amongst Black Muslims in Quebec. However, as it stands, the current literature omits experiences and perspectives of Black Muslims who are members of the Shia, Ismaili, and Ahmadiyyah communities as well asBlack-focused Muslim groups like the Nation of Islam, the Five Percent Nation, and the Moorish Science Temple. Without this inclusion the literature is Sunni-dominant, and not wholly representative of Black Muslims’ diverse belief systems and ways of practicing Islam.

In her work entitled “On Rocks and Hard Places: A Reflection on Anti-Blackness on Organizing Against Islamophobia”, Mugabo  also unpacks one of the most significant findings from the systematic review: the term Anti-Black Islamophobia. This term amplifies the specific kinds of racism and discrimination experienced by Black Muslims and individuals who are perceived to be Black and Muslim. It also describes how Black Muslims become erased from dominant narratives about Muslim identity by non-Black Muslims and non-Muslims alike. Although they do not use the same term, work by non-Somali and Somali authors also described similar realities. Several studies also included gender alongside race and religion through focusing on Black Muslim women in activistand religio-cultural spaceswhich facilitated a greater understanding of how they are distinctly marginalized within Muslim communities. Across most of the work retrieved in the systematic review, authors discussed the nuances of being both Black and Muslim. Rarely were these identities separated from one another which highlights their overlap, and the power dynamics that are involved which lends to an engaging Intersectional analysis.

The Significance and Future Steps

“The work also affirms that, like Black Muslims in the United States, we are  deeply rooted and were the first to arrive on this continent as a result of enslavement and colonialism.”

The significance of this systematic review not only lies in it being the first time an expert team of researchers consolidated and analyzed information about Black Muslims in Canada, but also in the fact that the research was made possible by a partnership between Black and non-Black Muslim groups. This kind of collaboration is essential to ensuring that our stories are told with accuracy, and so that Muslims who are not Black may know about our community’s origins and trajectories. The work also affirms that, like Black Muslims in the United States, we are  deeply rooted and were the first to arrive on this continent as a result of enslavement and colonialism. The gaps in the research that were uncovered in this systematic review would be best closed by members of non-Somali Black Muslim communities to begin to more earnestly capture their histories and experiences in Canada so that these stories can be included in a collective account about Black Muslims with all of our commonalities, divergences, and complexities. Finally, this work makes possible new visioning for theorizing about Black Muslims in Canada, and for describing the specific ways that intra-community marginalization occurs. There is much work to be done, but thanks to these authors, researchers, and scholars we have a blueprint to follow and adjust as needed.