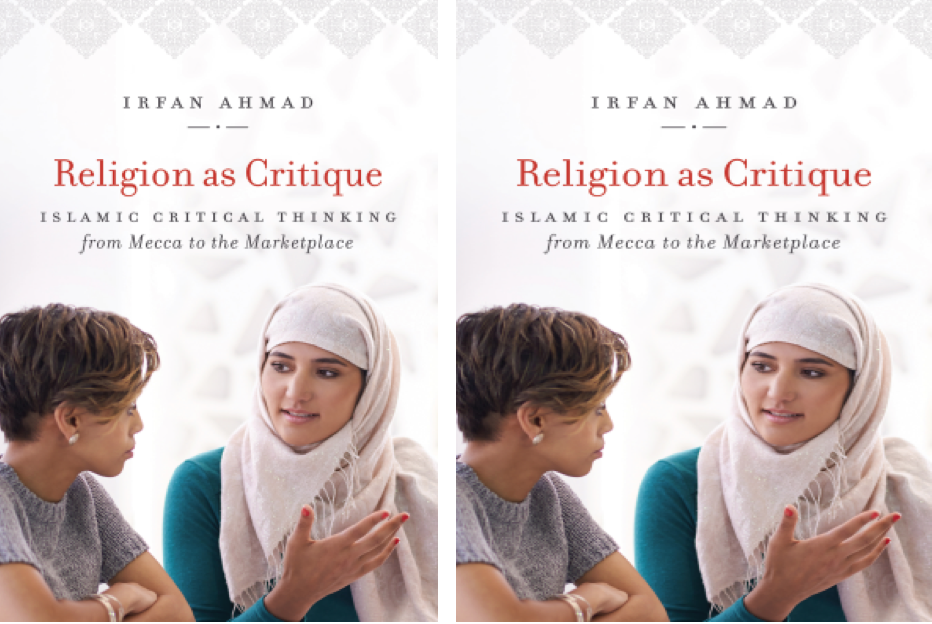 Irfan Ahmad’s Religion as Critique is a book not just about Islam but about religion, broadly, and its ability to speak to the human condition. In this work, Ahmad seeks to demonstrate the value of religious discourse in what he calls the “assemblage and disassemblage” (xii) of the narratives we construct in defining self and other, and in the pursuit of power and privilege. Even though Ahmad’s underlying argument is about religion in general, he focuses mostly on matters related to Islam and Muslim literature.

One of the primary motivations for the book is to challenge the unwarranted reproach of Islamic thought and culture and their supposed failure to entertain critical thinking. Many in the West have exhibited ignorance and/or prejudice about Islam and Muslims through their writings, speeches, and the like. The “genealogy” is long and “runs almost concurrently with Europe’s colonial expansion” through the centuries, right down to the present (12). Ahmad cites well-known proponents of the “superiority” of Western thought in relation to Islam who often equated the latter “with the absence of critique” or worse. Martin Luther (d. 1546) “likened Muslims to the Antichrist” while Ernest Renan (d. 1892) saw this supposed absence of critique as the cause of “the immobility of the Muslim societies” (8). While Islam was “perceived as an adversary of reason, reason was depicted to dwell within Christianity. So was critique, a medium to institute reason in a world rampant with ‘unreason’” (49).

“One of the primary motivations for the book is to challenge the unwarranted reproach of Islamic thought and culture and their supposed failure to entertain critical thinking…Ahmad cites well-known proponents of the ‘superiority’ of Western thought in relation to Islam who often equated the latter ‘with the absence of critique’ or worse.”

The dichotomy was made clear: Christianity versus Islam, reason versus unreason, east versus west. Ahmad’s critique of the claims that Islam is devoid of critique (and hence reason) is centered on his understanding of these claims as Eurocentric, often couched in the language of the Enlightenment. He demonstrates, after a careful sifting of the scholarly evidence, that the Enlightenment was neither universal nor humanistic; in fact, it was “local” and “ethnic” (33). Ahmad contends that the “Enlightenment’s reason was a boundary-making and category-creating mo(ve)ment: civilized versus uncivilized, rational versus irrational, European/Western versus non-European, pure race versus mixed, traditional versus modern, reason versus fanaticism, and so on. Islam was an important Other in the matrix of that boundary making” (48).

Critique of the Critique

In a robustly written preface Ahmad begins to lay out his critique of the critique. He cites a recent blog in The Telegraph (by Ed West, titled “Can Islam Ever Accept Higher Criticism?”) which by both its title and content seemed to suggest that “Islam” is incapable of accepting higher criticism. The blog was referencing a documentary, “Islam: The Untold Story” by Tom Holland which is based on his book In the Shadow of the Sword. The blog represents a much bigger problem than the issues it seeks to address; it is in fact indicative of the now widespread Islamophobia which, among other things, reduces “Islam” to a handful of things, one of which being Islam’s supposed inability to allow freedom to disagree and to entertain doubt. By making the blog’s main claim as his starting point, Ahmad is able to address the wider discourse that operates on similarly false and ideologically motivated premises. The following lines capture Ahmad’s thesis well:

“In contrast to the conventional wisdom on Islam exemplified by [Ed] West’s post in the Telegraph–and shared widely by most academics, nonacademic intellectuals, and the general public–[this book] demonstrates multifaceted thriving traditions of critique in Islam, laying bare the principles, premises, modes, and forms of critique at work. It discusses believers in Islam as dynamic agents, not mere objects, of critique, for which the standard word in Urdu is tanqīd or naqd” (xi).

In Religion as Critique, Ahmad questions the frameworks used to define “critique” by arguing that it is not that critique is absent in Islam, rather, “it is about the inability of our prevalent frameworks to recognize and study the principles and practices of critique already at work in Islam” (12). He offers a theoretical and conceptual mapping of critique accompanied by a range of examples from a variety of Muslim sources and genres. Even as he deconstructs the universalistic claims made on behalf of the Enlightenment, he offers an “alternative genealogy” of critique in Islamic cultures and societies using examples from South Asia. A portion of the book is based on ethnographic data (gathered in the “marketplace” – part of the title) where the author draws on his field research in delineating alternative modalities and forms of critique. However, being true to his word: “A description that doesn’t sufficiently describe the condition of its own description to outline another description is itself in need of critical description” (xiii), Ahmad offers also a “theoretical horizon” so as to properly situate his arguments that emanate from the material he has gathered.

“In Religion as Critique, Ahmad questions the frameworks used to define ‘critique’ by arguing that it is not that critique is absent in Islam, rather, ‘it is about the inability of our prevalent frameworks to recognize and study the principles and practices of critique already at work in Islam’ (12). He offers a theoretical and conceptual mapping of critique accompanied by a range of examples from a variety of Muslim sources and genres.”

Ahmad has two main arguments as noted in the introduction; first being that “reason, critique, and reflexivity” did not begin with the Enlightenment or with Kant (14). Instead, these tropes can be traced back to prophets and sages of the axial age (800-200 BCE) (54), some of whom we know as founders of major world’s religions such as Moses, Jesus and Muhammad. For the present inquiry, the latter is important and is identified as “a critic of the Meccan social order” whose critique was “embodied” and “comprehensive.” In fact, the Qur’an describes the mission of the Prophet using words (iṣlāḥ, or reform) that necessitate critique. Ahmad’s second argument relates to his critique of the Western notion of reason as “sufficient” or “autonomous in arriving at judgments.” He states that reason is non-existent if it is “unaided, delinked, unhooked, isolated, [and] detached” from the rest of who we are as human beings. In the Islamic tradition, reason (‘aql) is valued but only insofar as it works in concert with qalb (heart) (15-17). The notion of qalb is “more holistic and complex than the truncated reason of Cartesian cogito” and is inclusive of “both intellect and feelings” (61).

Ahmad traces the use of the word tanqīd to 1904 in the writings of Urdu reformist writers such as the Muslim scholar Abul Kalam Azad. Generally, tanqīd is associated with literature, however, Ahmad’s aim is to show that critique, both as an idea and practice, is relevant to, and therefore exists in, all areas of life (71). Hence this work includes forms of critique found in texts as well as that found in the life of “ordinary subjects” (179).

Abu’l ‘Ala Maududi (d. 1979) and his theoretical exposition of Islam occupy much of the book. Here Ahmad’s appraisal is comprehensive, covering Maududi, the critic as well as other scholars who were critical of Maududi from amongst his own intellectual class. Here, Maududi appears to be vindicated against his critics. It might be because Ahmad is more familiar with Maududi’s thought as opposed to some of his critics. Wahiduddin Khan, for example, is identified as a “substantive” critic yet Ahmad has not paid nearly as much attention to his arguments as they probably deserve. A more careful reading of Khan’s other works such as fikr-i-islāmī (missing in this study) may have made the discussion richer. Nevertheless, it is important to note that while Ahmad appreciates the enormous contributions of Maududi to the subject at hand, he also acknowledges some of Maududi’s shortcomings, such as his designation of Maududi’s views on women as “neopatriarchy” (162).

In an effort to show critique by “ordinary subjects (nonintellectuals)” Ahmad unveils one of the most original and liberating accounts of the Khudai Khidmatgar movement initiated by Abdul Ghaffar Khan (d. 1988) which he describes as an “autonomous entity” and a “movement of critique” (183, 185). Ghaffar Khan stood tall (literally) against British colonial rule and its unjust laws. He was firmly rooted within the practice of Islam, and, from there he inspired a powerful anti-colonial movement in the service of religious and cultural freedom, human dignity, and inter-religious solidarity.

“People are often critical of religion because they view it as stagnant and archaic, anti-inclusivist, and resistant to freedoms that are commonly associated with democratic ideals. On the contrary, Ahmad’s work argues that religion is an ‘important agent of critique’…”

Ghaffar Khan envisioned all of this as part of his agenda for reform (iṣlāḥ) “a concept emanating from Islamic tradition” (190). Ghaffar Khan was a critic by action, and by demonstrating his commitment to the principles of justice and peace. He critiqued not using words but by “recalling, retrieving, and renewing” Islam and “its moral vision” (188). Khan actively promoted and consistently stressed the importance of “Hindu-Muslim unity” also insisting that his mission is to serve all God’s creatures as well as “people of all faiths” (191).

People are often critical of religion because they view it as stagnant and archaic, anti-inclusivist, and resistant to freedoms that are commonly associated with democratic ideals. On the contrary, Ahmad’s work argues that religion is an “important agent of critique” and the religious figures, such as Moses, the Buddha, Christ, Muhammad (among others) were “critics par excellence” (xii). In claiming that religious discourse is critique, he is in effect saying that religious truths, with the help of reason, can be re-framed and re-interpreted to once again become dynamic, inclusive, and open to change, thus, contributing to the common good. If taken seriously, this book may even inspire the kind of courage and inter-religious solidarity embodied by Ghaffar Khan, which is vital for addressing bigotry and hate prevalent today.