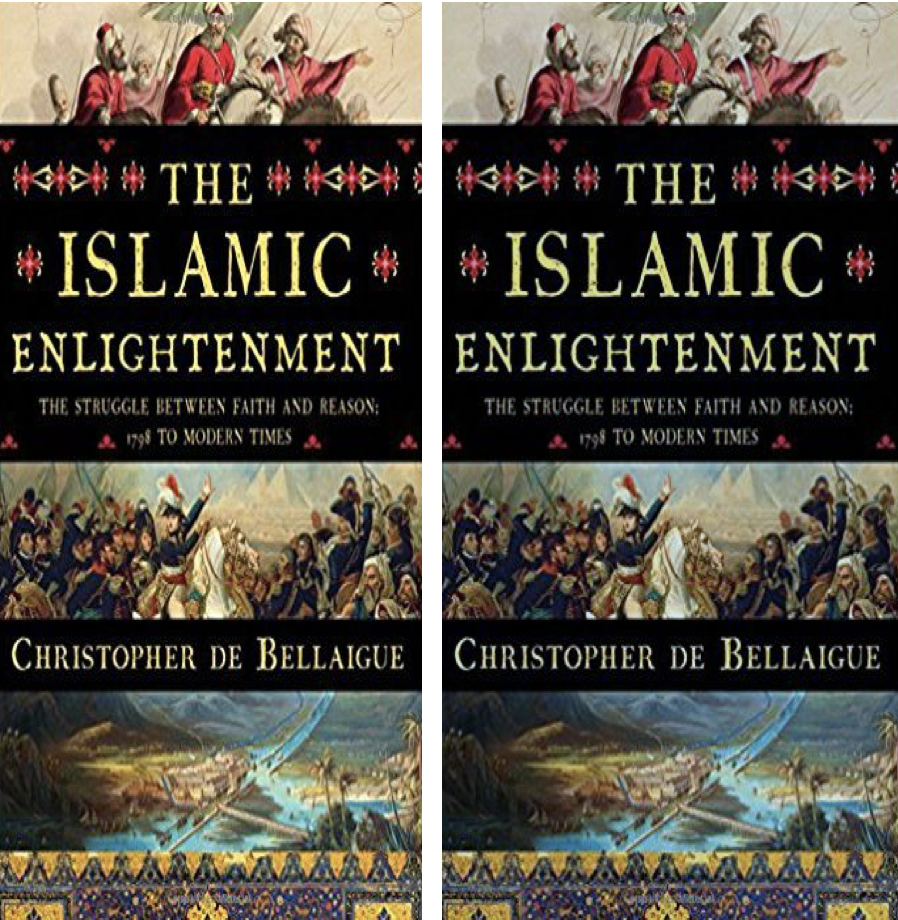 In response to ubiquitous calls for an Islamic reformation on par with that which took place in sixteenth century Europe, historian and journalist Christopher de Bellaigue’s The Islamic Enlightenment argues that this already took place some 200 years ago. Contrary to the orientalist depiction of the Middle East as timeless and unchanging since medieval times, we learn that “the experience of these places has been one of relentless yet vitalizing alteration – of reforms, reactions, innovations, discoveries and betrayals.” This period is generally referred to as the nahda, Arabic for “renaissance,” taking place in the Middle East and North Africa beginning in the mid-nineteenth century in response to philosophical, scientific, religious, legal, ethical and social innovations introduced to the region largely after Napoleon’s invasion of Egypt in 1789.

The book is structured to mirror “the all-embracing nature of the evolution that took place in the Middle East” (155). The first three chapters are named after the three cosmopolitan centers representing the dominant ethno-linguistic groups of the region: Arabic “Cairo,” Turkish “Istanbul,” and Persian “Tehran.” The fourth chapter is entitled “Vortex” to describe the irresistible force of the Enlightenment, drawing together the entire Middle East into its orbit so that “it is no longer necessary to disaggregate Tehran, Cairo and Istanbul at a narrative level” (155). Chapter 5 is called “Nation” and focuses on those people and events that helped usher in the transformation of Ottoman Cairo and Istanbul and Qajar Tehran into the respective centers of the modern nations of Egypt, Turkey and Iran. The final chapter, “Counter-Enlightenment,” deals with the movements and events that sought to stifle the progress of the reformers.

While reactionaries in all these fields did much to slow down the progress of their reformist opponents, de Bellaigue argues that the most successful retardants of reform in the Middle East were the exploitative policies of the European colonial empires along with local despots who violently quelled democratic progress while at the same time supporting other types of reform, particularly in the military. It is a finding that offers an explanatory alternative to Henri Lauziere’s argument in his 2016 book The Making of Salafism, that “due directly to decolonization,” the reform movement died out and was “replaced by an anti-innovative and antirationalist movement of Islamic purism.” In The Islamic Enlightenment, de Bellaigue argues that it was the prolonged refusal to decolonize on the part of the European empires, and not decolonization itself, that is to blame for the rise in reactionism.

“de Bellaigue argues that the most successful retardants of reform in the Middle East were the exploitative policies of the European colonial empires along with local despots who violently quelled democratic progress while at the same time supporting other types of reform, particularly in the military.”

Reform, Reaction and the Anxiety of Influence

One criticism I do have of this book is its tenuous grasp on the ways in which medieval Muslim scholars might have influenced the men and women of the Islamic Enlightenment. At one point, de Bellaigue writes that the theology of Abu’l Hassan al-Ashari (d. 936) (the first part of al-Ashari’s teknonym is incorrectly written out as Ab’ul on page 281 and altogether absent on page 325), thought to have influenced the reformer Muhammad Abduh, is based ‘rationally on the laws of the universe.’ Then at other points (pp. xxx, xxxiv, 45, 325), al-Ashari is identified as having popularized the doctrine bila kayf, ‘without asking how,’ that “smothered philosophy with a bleak and unthinking determinism.” According to de Bellaigue, it was the radical Islamist Sayyid Qutb’s (d. 1966) restatement of Ashari’s doctrine that exemplifies a rejection of Muhammad Abduh’s rational reformism.

The author then introduces another term in Ashari theology, kasb or the acquisition by humans from God of seemingly voluntary actions, which declares humans responsible for God-made actions, and thereby deserving of reward or punishment in the afterlife. This idea, de Bellaigue tells us, was malleable enough for the reformer Rifaa al-Tahtawi to cast in a positive light and counter the determinism of bila kayf. And yet, in kalam, Islamic speculative theology, it is in fact the doctrine of kasb that limits the role of free will in favor of determinism, whereas bila kayf is a doctrine having to do with knowledge of the deity’s attributes, like sight, hearing, speech, etc., and not about human action. Another scholar of the Islamic Golden Age, Abu Hamid al-Ghazali (d. 1111), is inexplicably described as both a medieval philosopher (196) as well as one “whose skewering of philosophy and pursuit of spiritual ‘extinction’ in the eleventh century proved damaging to the speculative tradition in Islamic thought” (307).

“One criticism I do have of this book is its tenuous grasp on the ways in which medieval Muslim scholars might have influenced the men and women of the Islamic Enlightenment.”

I have also to question why de Bellaigue considers the reformer Jamal al-Din al-Afghani’s (d. 1897) journal, the Firmest Bond, “the first media organ that can be called Islamist” (219). His rather lengthy definition of Islamism as “the harvesting of Islam for political use and the manipulation of religious dogma in order to create ideologies suitable for modern politics of revolutionary activity outside the established political order and cutting across national boundaries” (307) would subsume Jamal al-Din al-Afghani and his democratic reformist disciples Muhammad Abduh and Saad Zaghlul under the same heading as the founder of the Muslim Brotherhood Hassan al-Banna (d. 1949) and radical ideologue Sayyid Qutb. And yet, de Bellaigue has already identified Qutb’s political thought as representing a break with Afghani-inspired reformism for a type of ultraconservatism more in line with that of the traditionalist clerics who opposed Afghani and Abduh. This is an important observation on de Bellaigue’s part that problematizes Johanna Pink’s claim in her entry on Abduh’s disciple Rashid Rida (d. 1935) for Brill’s Encyclopedia of the Qurʾan that the influence of their Tafsir al-Manar “on the Muslim Brotherhood and its offshoots” and in “the revolutionary Qurʾanic commentary by Sayyid Qutb” is more profound than it is on Muslim modernists. Should we not consider the pro-Qajar, anti-constitutionalist Iranian cleric Fazlullah Nouri (1843-1909) as the earliest example of Islamism, or political parties like the Society of Muhammad and the Society of Islamic Scholars, both founded in 1908 by conservative-traditionalist Ottoman ulama? These parties, through their respective journals, Volkan and The Statement of Truth, wrote in opposition to the progressive views expressed in the Ottoman reformist periodical Sırat-ı Müstakim (The Straight Path) that was more closely aligned with the thought of Afghani.

“As a work of popular history, The Islamic Enlightenment provides an eloquent corrective to widespread biases stemming from Islamophobic claims of an intrinsic incapability of Muslim people to embrace modern values.”

That “the story of the Islamic Enlightenment, including its dissonant coda, the counter-Enlightenment, seemed to have come to an end around 1980” and that “nowadays it is hard to discern any general movement in favour of liberal, humanist principles in the Middle East” (349) does not quite ring true to me. There remain to this day a number of leading figures that embrace progressivism, oppose antirational clericalism and to varying degrees are recognized as authorities in the Muslim intellectual heritage. They include, but are not limited to, the Egyptian phenomenologist Hasan Hanafi and his conception of an Islamic Left, the Moroccan sociologist and Islamic feminist Fatima Mernissi (d. 2015), and the Iranian democracy activist and philosopher Abdulkarim Sorosh. That major media outlets in Europe and the United States have chosen to ignore such reformers in favor of giving a platform to hate preachers like Anjem Choudary, who is neither a cleric nor a scholar and who has been banned from mosques and refused a platform by Muslim organizations everywhere, does not mean the story of Muslim liberal humanism is over.

As a work of popular history, The Islamic Enlightenment provides an eloquent corrective to widespread biases stemming from Islamophobic claims of an intrinsic incapability of Muslim people to embrace modern values. Scholars of Islamic thought in the Middle East and North Africa will also find it useful as a reference work for its comprehensive survey of transnational Muslim progressive and conservative trends in the nineteenth and twentieth centuries.