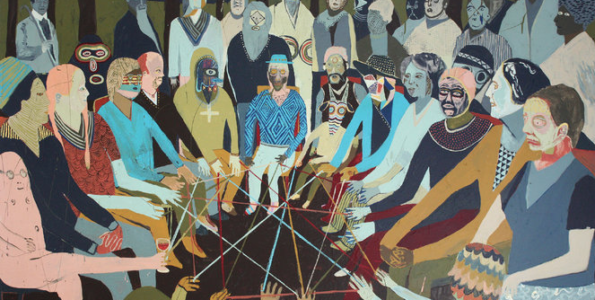 These are days desperate for answers. In both practical and existential terms, people are asking what Trump’s Electoral College win – and presidency – means. Does his combative style represent a new populism? Does his presidency give legitimacy to racist and fascist sentiments? Is this a harbinger of America’s moral decay or an opportunity to instantiate a particular moral vision that will aright past indiscretions? Many in our country are uncertain, anxious, and afraid, while others feel vindicated and optimistic. The tension speaks to a divide, not a way to bridge a divide.

Bridging the divide is not about overcoming it, nor is it about acting as if there is no divide. The 2016 presidential election made the division within our country feel insurmountable.

“Bridging the divide is not about overcoming it, nor is it about acting as if there is no divide. The 2016 presidential election made the division within our country feel insurmountable.”

Those who voted for Clinton characterized Trump supporters as complicit with his misogynistic and vitriolic rhetoric while those who voted for Trump characterized Clinton’s supporters as complicit with the corruption of establishment politics. Many voters were unhappy with the choices before them, yet support of one candidate over another indexed the irreconcilability of different ways of seeing, and answering, America’s problems. Between family and friends, these divisions were personal and unintelligible, for we often imagine those closest to us as thinking like us –though this may apply more to our friends than our family.

And here it is that despite the need for answers, we must acknowledge that we are perhaps asking the wrong questions. The questions being asked about the election, the upcoming transition, and the future of American politics center on a debate of how the “other side” (and it is never us) has put us in an impossible position; there is no introspection as to how my side (whichever side it is) contributed to the political divisiveness of the day. Obstructionism and the unwillingness to concede value to the other side (Democrat or Republican) has become the tenor of contemporary politics in Washington. Bipartisanism has become a nostalgic idea of politics—ironically reminiscent of a time when people saw government as more effective and responsible—that few take seriously, and in practice it has become a dirty word that implies compromise and thus getting only “part” of what one wants.

This unwillingness to work across political divides has many contributors to blame, but two misguided assumptions are at its heart: a monopoly over claims to truth and a diminishing appreciation of the value of difference.

The idea that either Democrats or Republicans hold a monopoly on solutions to the problems our country faces is simplistic and narcissistic, yet reflective of thinning relationships within society.

“The idea that either Democrats or Republicans hold a monopoly on solutions to the problems our country faces is simplistic and narcissistic, yet reflective of thinning relationships within society.”

The less that is expected of neighbors, experienced as shared, or done with others outside of one’s group, the more reliant on ideological positions—reified online through social media and biased, uncritical “news”—people become. Those who think differently than we do are trivialized and villainized. How someone feels about poverty, education, race, gender, religion, and other fundamental aspects of life are rooted in experiences that are defined through differences, differences that are often uncomfortable as we are reminded by the election.

When communities are divided and unwilling to acknowledge the value of their differences, ideology replaces empathy and stymies governance. Brute force gets us only so far, and certainly it is not an aspired-to method of democratic governance. Both sides of the political spectrum are at loggerheads and the inability of our politicians to effectively govern is representative of a societal problem: that we will accept the other as equal only when he or she accepts our particularistic vision of society.

Being in community with those with whom you disagree is uncomfortable. But that does not make it wrong. One approach to addressing the discomfort of difference is to seek common ground in what is shared. This works to an extent, but is misguided precisely because such approaches downplay the importance of differences. There is much that those who supported Clinton and Trump share, but it was the differences that came to matter, that have come to enunciate the divide. We need differences to be who we are, and this is a salient observation in both personal and political life. Common ground, after all, is not the same as middle ground.

“We need differences to be who we are, and this is a salient observation in both personal and political life. Common ground, after all, is not the same as middle ground.”

The Middle Ground as a Bipartisan Space

Middle ground is a worthy space to aspire in a country divided, for it recognizes the political and social divisions before us yet does not gloss over them by emphasizing the least common denominator of what is shared. Middle ground is an agreement to acknowledge the divide that exists and still be willing to bridge it. Middle ground is a reflexive space where we can see our own biases and prejudices and recognize how it influences our ideas of community. Middle ground is often an experience marked by discomfort but also hope, for what emerges there is a recognition that values need not be jettisoned to be in community with another who is different. Rather, in sharing experiences with others who are different all the way through, we come to grant them more moral credit than ideology alone would allow. Middle ground is a bipartisan space.

Living as we are in such deeply partisan political times, however, leads many to be skeptical of there being a path forward, short of one side completely dominating the other. True, any way forward through bipartisan cooperation requires leadership and moral courage, but such things are not outside of our reach. It is possible to build a community without having to resolve the ideological differences that divide us. Since 2003, CEDAR – Communities Engaging with Difference and Religion has successfully modeled a pedagogy that does this. Bringing together people who are different in a myriad of ways – different in race, gender, income, education, location, age, religion, etc. – we create opportunities that encourage the group to explore a social problem from diverse perspectives and in so doing see that the group itself can form a community through experience rather than mere assumption of shared values.

It is perhaps too much to begin with a goal of changing people’s moral views of the world, but through our programs we find that in being with others who are different, in coming to know the other through sharing experiences, understanding and empathy emerge.

“…through our programs we find that in being with others who are different, in coming to know the other through sharing experiences, understanding and empathy emerge.”

The Evangelical Christian may continue to see homosexuality as a sin, but also come to appreciate a narrative of suffering that allows him to advocate respecting the values of gays and lesbians, even as they differ from his own; the black woman comes to see how her understanding of prejudice is similar to that of the Jew, the Muslim, the immigrant, and the impoverished; and even those with different political ideologies come to appreciate where disagreement is essential and nonetheless community continues to be possible. The result of such engagement is that participants end up giving others within the group the moral credit they would otherwise readily deny them as strangers.

All this is simply to say that rebuilding relationships across the political divide that lies before us is possible. But we need to think about community differently. Community does not presume or produce an essential similarity among its constituents, but often the discomfort of difference. The only way forward is in recognizing this discomfort. There is hope and opportunity in this, but it requires courage to speak with empathy and humility to articulate that the other with whom one disagrees brings value. That is how broken politics are fixed and divisions made manageable. We should expect this of our politicians, as well as ourselves. But we cannot wait for our leaders to do it alone. The responsibility is also ours.