Dr.  Ozlem Madi-Sisman completed her PhD at Bilkent University. During her doctoral research, she spent two years at Harvard University as a special student, one summer semester at Oxford University as a researcher, and two years at Furman University, where she also began teaching courses on Middle Eastern politics and Politics of the Developing world. Since the fall 2016, she has been serving as a lecturer at the University of Houston system. And since the fall of 2018, she has been serving as a visiting Assistant Professor of Political Science in University of Texas-Galveston. Her book, The Reluctant Capitalists: Muslims, Money and Democracy in Turkey was published by Palgrave Press in 2017.   Dr. Cengiz Sisman completed his PhD at Harvard University. Currently, he is an Associate Professor of History at the University of Houston-CL. His book, The Burden of Silence: Sabbatai Sevi and the Evolution of the Ottoman-Turkish Donmes, was published by Oxford University Press in September 2015. His works are connected by his deep interest in the history of religions, religious conversion, irreligion, messianism, mysticism, crypto-double identities, and religion and modernity. 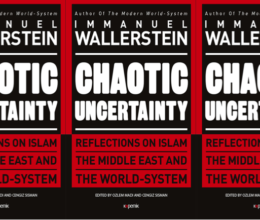 Immanuel Wallerstein is one of the most important yet controversial thinkers and activists of our time, writing on a wide range of topics, from global economics and international politics, to the decline of the United…