Pablo Casado, also known as Khalid, was born in 1982 in Madrid, Spain, where he has lived and developed both personally and academically. He worked during several years in his family business, a pharmacy, run first by his grandfather and then by his father. Although he always felt a special attraction towards the shapes of Arabic calligraphy, it was not until 2008 when he contacted the reed pen for the first time, when he attended a brief introductory course to nesih calligraphy. Only a few days of practicing this art were enough to awaken a deep interest in him, and he soon felt the need to receive further instruction from a real master who could transmit him this ancient knowledge. It was at that point when he met Nuria García, the renowned calligrapher who later became his mentor and master. Guided by her, he traveled to Istanbul for the first time in 2009, and thanks to her he could get acquainted with her masters. This is how he started writing his first lessons with her help, and with the master calligrapher (hattat) Davut Bektas, and always under the supervision of the master Hassan Çelebi. Around two years later, he started taking lessons from the master hattat Ferhat Kurlu who, together with Nuria García, became one of his strongest influences. In 2014, and after having devoted himself completely to learning this art, he received his icazet or calligraphy diploma in sülüs and nesih styles in IRCICA (Research Center for Islamic History Art and Culture), signed by the masters Hassan Çelebi, Ferhat Kurlu and Nuria García. Currently, he continues traveling regularly to Istanbul and spending long periods there in order not to lose contact with his masters and with the purpose of continuing learning and refining his work. 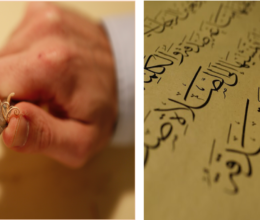 The Art of Islamic Calligraphy: Rituals and Traditional Art

When you start studying calligraphy, you never know when you will finish your career. The art of Islamic Calligraphy is a lifelong learning; it is a journey where you don’t just learn how to write…