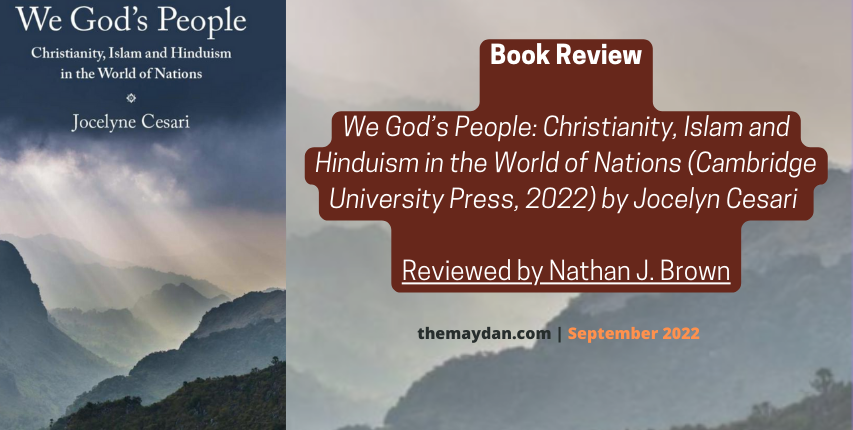 Jocelyn Cesari’s We God’s People: Christianity, Islam and Hinduism in the World of Nations is a strikingly ambitious work in two obvious ways: it tackles a very broad subject (the relationship between religion and politics) and it does so across the globe, with extended studies of India, Russia, China, and the Ottoman lands. But the study is ambitious in a third, more subtle, way as well. The book begins not by defining “religion” and “state” in a specific manner or deploying a specific set of models; it does not assume that “religion” and “politics” are two separate realms and study how they interact; instead, We God’s People proceeds inductively, exploring “the ongoing interactions between what is religious and what is political” (p. 15) as they co-evolve in a diverse set of large and complex societies.

“…We God’s People proceeds inductively, exploring “the ongoing interactions between what is religious and what is political” (p. 15) as they co-evolve in a diverse set of large and complex societies.“

How does Cesari accomplish this task, especially given that “religion” is notoriously difficult to define in a manner that travels well from one society, century, and tradition to another? She does so by avoiding hard definitions. Giovanni Sartori—the influential scholar whose insistence on care and precision in formation of concepts has been used to school generation of political scientists—is cast aside in favor of Pierre Bourdieu and even more Norbert Elias who introduced the idea of “habitus”—“the perceptions, feelings, evaluations,” that “operates like our second nature” (p. 16).  And she is especially attentive to changes over time. Actually—since Cesari is concerned as well with agency—she also explores how specific human beings, institutions, and actors change religion, its habitus, as well as institutional arrangements.

But how can such an inductive and subjective approach be applied globally? Cesari detects a striking pattern across the world and is interested in the specific way that pattern manifests. Here she makes another subtle move: she begins very briefly with the early modern Western European experience (as so many global studies do, using it to derive basic concepts and yardsticks) before moving quickly to a focus that insists on incorporating other global experiences from the beginning of the enterprise. When she does so, she discovers a very consistent actor in molding religion in the modern world: the nation state. 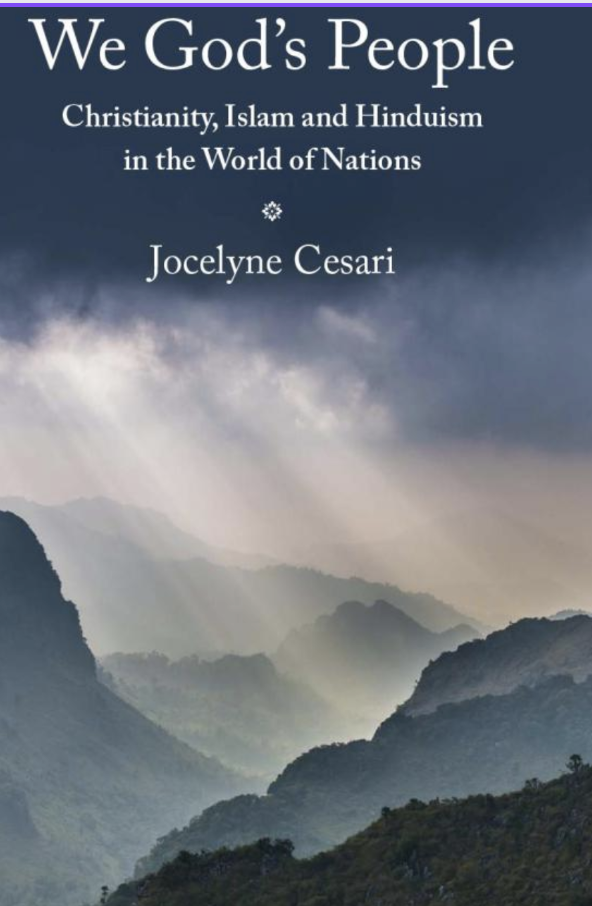 It should be no surprise to find that the nation state is an actor of such importance. States are powerful actors. But for Cesari, there is an unusual emphasis on the first part of the term, “nation state.” It is the nation that captures her attention, but again, she comes to the idea of the nation not with a preconceived notion of what a nation is (or a Sartorian definition designed to travel). Instead, she probes what kind of national community is developed in a particular context and how that shapes and creates—in a continuous manner rather than a definitive one with a single moment of transformation—the form that religion takes.

So how does Cesari uncover the nature of each national community? Her approach leans heavily on the writings of intellectuals and on the role of prominent leaders but she also pays careful attention to local communities. Imperialism is a powerful force in its own right, spreading ideas, sometimes protecting missionaries, and forcing reactions.

Cesari’s interest lies in what emerging national states do with “religion” as they emerge in diverse ways, In most cases it is not a generic category of “religion” but a particular religious tradition (though sometimes more than one) that is in question: how it becomes “religion” as an identifiable thing; who speaks for it; how it is structured.  She writes of three Bs: “belief, behavior, and belonging,” but it is the last that draws Cesari’s most sustained and intricate coverage. There is virtually no theology in her book, only smatterings of doctrine, a bit more of practice, but much more exploration of how people form a community. Since it is in the sense of “belonging” that nation and religion meet, this emphasis is not surprising. It is connected to a fourth B (unnamed directly): “bureaucracy,” since it is the institutions of the nation state that she is concerned with far more than conceptions of holy truth, the nature of divinity or content of sacred texts.

“So how does Cesari uncover the nature of each national community? Her approach leans heavily on the writings of intellectuals and on the role of prominent leaders but she also pays careful attention to local communities.“

This is an approach that is likely to undermine rather than develop typologies—particularly since none of the cases hold still but all continue to evolve. And indeed the cases are extremely rich and detailed.

The first case—focusing on the Ottoman Empire and especially on two post-Ottoman states, Turkey and Syria—is over 100 pages. Given Cesari’s past work (which has focused on Islam and the nation state), the mastery of detail and of scholarly writings is both expected and impressive. Drawing on her earlier writings she explains “pruning and grafting of Islam onto state institutions and national identities took place through two main mechanisms: nationalization of Islamic institutions and clerics, and the incorporation of Islam into the legal and educational systems” (p. 77). The result she terms “hegemonic Islam.” While that takes different forms, all share in common a conflation between religion and national community, a homogenization of the Muslim community, and a state that is the moral arbiter for the personal behavior of “believer citizens” (p. 107).  She is, of course, alert as well to the way political leaders can encounter and even engender opposition, but when Islamists “use the persistent power of Islam in society as a resource for political mobilization,” (p. 108) even their ability to do so is very much produced by the way that Islam has been formed in the context of the nation states in question.

The second case, India, is also complex—and the outcome just as contentious if not more so.  She traces how Hinduism was shaped by the experiences of Muslim rule, British rule, and the development (and divisions) of the nationalist movement but also how debates continue about the meaning of key terms like secularism and communalism. Overall the picture that emerges in this chapter is not so much the formation of a Hindu equivalent of “hegemonic Islam” as an intense politicization of the question of the nature of community and the relationship among Hinduism, other religions, national identity, and local practice.

In the Chinese context, matters evolved quite differently: religion was shaped (and in some ways even created as such) by the encounter with missionaries but also by a state that worked to insist on its dominance—and has been able to do so particularly effectively in recent decades. Cesari portrays a Chinese state that insists that in matters of this world, religion must operate in a manner consistent with the primacy of the state in the political community; even in transcendent matters, the state does not wish to permit the emergence of religious orientations that might challenge the state’s identarian (and administrative) claims—hence the conflict with specific religious groups (including, at times, Falun Gong, Muslim, and Catholic).

The final case, Russia, shows obvious discontinuities but what Cesari does find is a strong pattern in which national community and religious identity often meet in ways that can be traced back to the relationship between the “center of political power” and between both the “religious center of Orthodoxy” and “the other ethnic and religious groups” (p. 243).

Even this short summary shows the ambitiousness of the effort. Because her account is resistant to categorical statements and global generalizations (beyond the importance of the nation state), each chapter is extremely rich in detail. This can be overwhelming. The purpose, it seems, is not to provide a clear set of causal or probabilistic statements but to show how exploring the emergence of the nation state can help us understand and even narrate the way religion is defined, the themes in particular societies, and the points of conflict that emerge over religion in politics. Those who wish to read an account that reviews such issues briefly and develops universal statements should pick a different book.

“Even this short summary shows the ambitiousness of the effort. Because her account is resistant to categorical statements and global generalizations (beyond the importance of the nation state), each chapter is extremely rich in detail. This can be overwhelming.“

There are some characteristics of the book that may be underdeveloped. For instance, the quantitative sections—in which Cesari identifies key words in public discussions in various societies and works to tie them to patterns of politicization of religion—effectively illustrate her general themes and add some nuance but not always new insights. Her global focus is salutary but still rests on giving primary agency (especially in earlier centuries) to the West as developers of ideas (the nation state) and exporters of them; this may be the case but it seems to be assumed rather than explored. And the breadth of her case selection leads her to rely on an impressive survey of secondary literature—but one that focuses much more on leaders and intellectuals than larger populations. More sociological and ethnographic sources on “habitus” are deployed but much less extensively.

These are places where the book is not exhaustive; however, they should be noted not as criticisms but as observations of themes that could not be developed more fully without doubling or tripling the size of what was already an enormous research undertaking. Very few readers will finish this volume and cry out for more depth or breadth. We God’s People will not be—nor is it designed to be—the final word on religion and state but it will be a work that others will draw on to formulate far better questions than we have posed in the past.

Nathan J. Brown is professor of political science and international affairs at George Washington University. His most recent books are Arguing Islam after the Revival of Arab Politics, Oxford University Press, 2016 and Lumbering State, Restless Society: Egypt in the Modern Era, Columbia University Press 2021 (with Shimaa Hatab and Amr Adly).