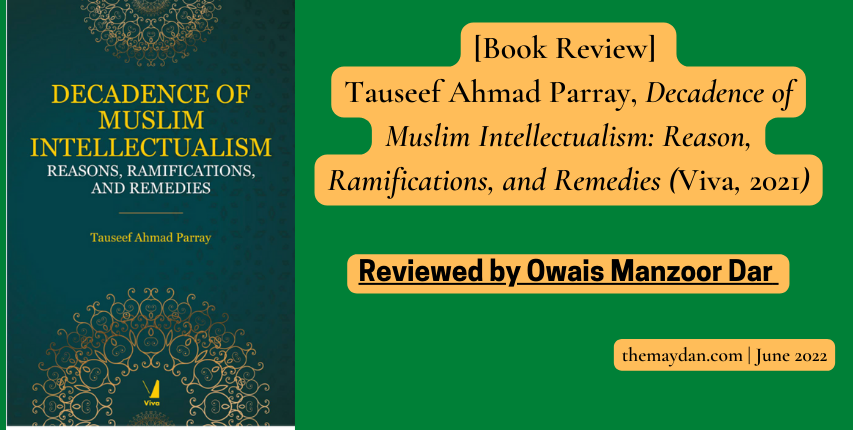 The discursive space around the ‘Muslim Intellectualism Decadence’ debate is occupied by a myriad of connected questions. Among them: why and how Muslims have faded away from the intellectual maps of the contemporary world? What reasons led to their absence and lack of recognition in the sciences? What occurred in Islamic civilization to arouse the need for ‘Radical Reform’? A plethora of literature exists to explore these questions[i] and, several theories have been put forth by scholars of various backgrounds to remedy or otherwise explore this perceived deficit. Tauseef Ahmad Parray’s Decadence of Muslim Intellectualism: Reason, Ramifications, and Remedies is the latest addition to this literature. In addressing these questions, Parray reconstructs key elements of the debates on the history of Muslim intellectual tradition and the Islamization of knowledge, and places these elements in conversation with contemporary challenges.

“In addressing these questions, Parray reconstructs key elements of the debates on the history of Muslim intellectual tradition and the Islamization of knowledge, and places these elements in conversation with contemporary challenges.”

Parray’s work divides into three main parts. Part I (Chapter 1-3) focuses on Ilm (knowledge) in the Islamic tradition, as well as Muslim intellectual contributions from the time of Prophet until the fall of Baghdad in the 13th century. Part II (Chapters 4-6) highlights the reasons – external as well as internal – that led to the decadence of ‘Muslim Intellectualism.’ Part 3 (Chapter 7) surveys 30 Muslim research institutes and think-thanks around the world, from both the West and from predominantly Muslim countries.

Part I opens with an exploration of the concept of ilm in the Islamic tradition. Noting that the terms ilm and its derivations occurs 728 times respectively in the Qur’ān, Parray argues that this indicates “the importance of knowledge as the second most important concept after tawhīd (recognition of oneness of God) (6).” To substantiate the argument, he quotes Fathi Hasan Malkawi, who asserts that the occurrence of the word ilm in the Qur’ān is equal to the numbers of places in which the term Imān (faith) and its derivatives occur. Additionally, he cites numerous instances where the Prophet enjoined the pursuit of knowledge. Such observations set the groundwork with which Parray makes a case for the centrality of knowledge and knowledge acquisition in Islamic civilization. In doing so, Parray explores not only developments from the Prophet’s lifetime and the early caliphate, but also from the Umayyad and Abbasid eras, which saw the expansion of various branches of knowledge including grammar, law, geography, history, and hadith, in addition to the founding of prominent institution of higher learning. He concludes that Prophet “Muhammad (pbuh) acted as Educator, Islam as Enlightenment, and the Qur’ān as Sacred epic” (18). 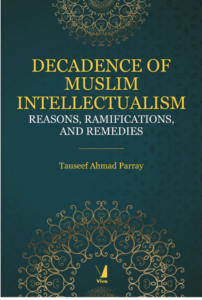 These advancements were made not in isolation, but as part of a broader intellectual current within the region; Parray asserts that “science started to develop in the Islamic civilization only after coming in contact…with Greco-Hellenistic heritage on the northern and western borders or the Persian-Sasanian heritage on the eastern and southern borders, mainly under the early Abbasid dynasty between the eighth and tenth centuries” (20-21). A multitude of earlier texts were translated into Arabic, and many of the Arabic texts of this period were subsequently translated into European languages. In sum, Parray follows Zaiduddin Sardar assessment that “there was hardly a field of study that Muslims did not pursue vigorously, or to which they did not make an original contribution” (23).

Having painted a picture of a flourishing Muslim intellectual world in what preceded, Parray devotes Part II to exploring the reasons, external as well as internal, for the apparent intellectual decay in the Muslim world. His discussion hinges around the following key causes: a) the decline of Muslim political strength, as a result of Mongol and Crusader invasions, internal civil wars, and the fall of Baghdad as well as the end of Muslim rule in Spain being only a few examples; b) “the bifurcation of knowledge into religious and worldly sciences,” (34); c) “the closing of gates of Ijtihād and the total dependence on Taqlid (literally imitation or blind following of the past)” which “laid down limitations on reasoning, rationality, and set bondage on freedom of expression” (36); d) “[t]he separation of thought from action” paralleling a separation between political leadership and intellectual accomplishment  (36-7); e) colonialism, which brought with it further political humiliation alongside challenges to Islamic traditional thought.

As for the contemporary period, Parray argues that even after the Muslim World became ‘free’ from colonialism, it still found itself held hostage to conditions anchored in Western societies. For instance, most Muslim countries have adopted a Western style academic structure, but have failed to reproduce its “objectivity” and “methodology.” Thus in the Muslim world Western-style schools and universities increased but “quantity overwhelmed quality, financing has faltered, and standards have plunged” (italics in original) (45). With this subpar quality, Muslims “lack suitable platforms, academic and research centers, for the development for the advancement of research, excellence and innovations” which has resulted in a “brain drain” (53). The lack of “financial resources and incentives has been a major barrier to research except in some oil-rich states” such that “[n]o Muslim country spends more than 0.50 per cent of its (much lower) GDP on research, whereas Western countries spend 2 percent or more of their gross domestic product (GDP) annually on research” (53).

The concluding part of Parray’s work presents remedial measures for the above challenges, hinging on the concept of intellectualism. For Parray, intellectualism is “the backbone of a civilization.” He argues that initiatives should be undertaken for the establishment of academic platforms for research, discourse, and training. Such platforms should foster a sense of intellectualism that encourages academic engagement while also counteracting “the absence/lack of the conception of ‘Belonging to the Ummah’ and/or the absence of spirit of contributing towards the welfare of one’s own community/society” (161-63).

In sum, the book offers an extensive survey of the Muslim intellectual deficit, coupled with a detailed history of the prior ‘Islamic Golden age’ based on sources ranging from Arabic to Urdu and English.

“However, given that the book revolves around the relationship between Islam and science, the lack of key information on the epistemological integration of the two is sorely felt.“

However, given that the book revolves around the relationship between Islam and science, the lack of key information on the epistemological integration of the two is sorely felt. Like many others, Parray is convinced that Muslims should adopt the Western methodology, arguing that it could easily be adapted to Muslim societies by bringing them into line with Islamic methodology. However, the fundamental characteristic of post-Renaissance Western intellectualism is the formation of a specific epistemologically defined ontology which centers on humanized knowledge. The humanization of epistemology around knowledge, whether through empiricism or materialism, or through logical forms after the reemergence of ancient philosophy, created a relationship of dependency between ontology and epistemology in the Western philosophical tradition.[ii] However, integrating basic principles of Islamic theocentric cosmology such as tawhīd, to the discussion about the unity of knowledge and epistemology is a daunting task. The process of synthesizing the two types of thought, then, would be more complicated than portrayed here. On a more minor note, the use of the expression “Muslim backwardness” is slightly misleading, as it is based on colonial patronage and may lead to misunderstanding.[iii]

“Parray’s sophisticated dialogical approach motivates us to think seriously about the promises and challenges that revolve around the discussion of Muslim intellectual deficit. Just as its title promises, the book admirably delivers on all the three components: reason, ramifications and remedies.“

These criticisms aside, Decadence of Muslim Intellectualism: Reason, Ramifications, and Remedies will no doubt hold an important place in the field. Parray’s sophisticated dialogical approach motivates us to think seriously about the promises and challenges that revolve around the discussion of Muslim intellectual deficit. Just as its title promises, the book admirably delivers on all the three components: reason, ramifications and remedies.

Owais Manzoor Dar is a Ph.D. student in the Department of Islamic Studies at Jamia Millia Islamia, New Delhi, India. His interests are in South-Asian Muslim Intellectual history, especially the political thought in the (post)-colonial era and its relation with the Qur’ānic exegesis. His interests include Qurʾānic studies; Modernist/Reformist thinkers and movements in South-Asia.

*The author first presented this review at the Fifth Annual Graduate Students Book Review Colloquium on Islam and Middle Eastern Studies in 2021 organized by Ali Vural Ak Center for Global Islamic Studies at George Mason University and the Maydan.

[i] For instance, Syed Ali Ashraf’s Crisis in Muslim Education (1979), Fazlur Rehman’s Islam and Modernity: Transformation of intellectual Tradition (1982), Ismail Raji al-Faruqi’s Islamization of Knowledge: General Principles and Work Plan (1989), Bernard Lewis’s What Went Wrong? Western Impact and Middle Eastern Response (2002), Zaiduddin Sardar and Jeremy Henzell-Thomas’s Rethinking Reform in Higher Education: From Islamization to Integration of Knowledge (2017), M. Umer Chapra’s Muslim Civilization: The Cause of Decline and the Need of Reform (2008), to name but few. Two main argument dominate the discourse about the perceived decline in these books; lack of dynamism in Islamic tradition after the rise of dogmatism and decline in intellectual and scientific activity.