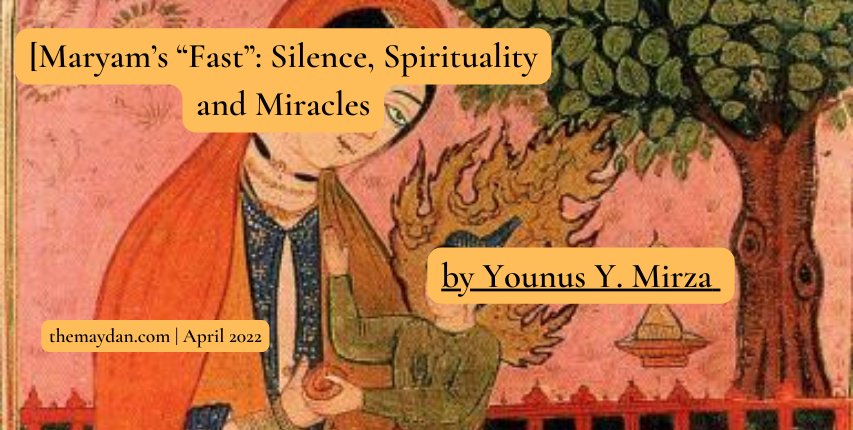 The word “fasting” (ṣawm) is used in the Qur’an to describe the ritual fast or the month of Ramadan.  Scholars define fasting as “abstaining from food, drink and sexual activity” and frequently reference verse 2:183-185 as legislating the month of fasting.[1]  However, in the Qur’an, fasting does not always refer to Ramadan but fasting in general, most frequently as supererogatory fasting.  For instance, fasting could be used to expiate sins and become closer to God.  However, we find an instance in the Qur’an where the word “fasting” (ṣawm) is not used to describe ritual or supererogatory fasting but something similar but also distinct.  In the chapter of Mary or Maryam, after the miraculous birth of Jesus/ ‘Īsā, Maryam is told “and say to anyone you may see: ‘I have vowed to the Lord of Mercy to fast (ṣawm) from conversation, and I will not talk to anyone today.’”[2]  What does the word “fasting” (ṣawm) here exactly mean?[3]

Commentators generally understand “fasting” here to be “silence” (ṣamt) with some even stating that “silence” was included in some of the early readings of the verse (ṣawman wa ṣamtan).  Al-Ṭabarī (d. 310/923) narrates a tradition that the Children of Israel would “fast from talk as they would fast from food” with the only exception being the remembrance of God.  He also notes that fasting at that time would be to “fast from food, drink and speaking to people” but the fast of Islam now only refrains from food and drink.  Al-Qurṭubī (d. 671/1273) further explains the link between fasting and silence because “fasting is abstaining (imsāk) and silence is abstaining (imsāk) from speech”.  Others like al-Zamakhsharī (d. 538/1144) connect the “fast” here with common speech noting that “silence from a foolish person is mandatory.”  His statement evokes other Qur’anic verses such as “The servants of the Lord of Mercy are those who walk humbly on the earth, and who, when the foolish address them, reply, ‘Peace’” (19:63).  Another prophetic tradition states, “Whoever believes in God and Hereafter say something good or be silent (li-yaṣmut)”.[4]  In other words, Qur’an conveys that silence and succinct replies are often more effective than drawn out rebuttals.

“In the Study Qur’an, Maria Dakake explains that Maryam’s “fast of silence also evokes Zachariah’s temporary inability to speak as a sign of the impending birth of his son” and that her fast of “silence, however, also allowed Jesus to speak on her behalf.””

Besides the linguistic meaning of “fasting”, commentators highlight that Maryam’s fast connects her to Zachariah/ Zakariyya and her miraculous son Jesus/‘Isa.  For instance, Maria Dakake in the Study Qur’an explains that Maryam’s “fast of silence also evokes Zachariah’s temporary inability to speak as a sign of the impending birth of his son” and that her fast of “silence, however, also allowed Jesus to speak on her behalf.”[5] While the word “fasting” is not used in reference to Zachariah/ Zakariyya, both Maryam and Zakariyya are given the miraculous news that they will have a child and part of their sign is not to speak but to be silent. In fact, while various words are repeated through the chapter, the word speech (kallama) is only used in reference to both of them.[6] 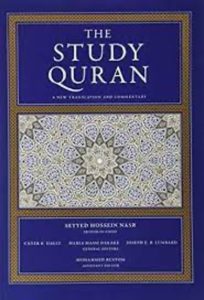 Similar to Maryam, Zachariah/ Zakariyya is told that “you will not [be able to] speak (tukallim) to anyone for three full [days and] nights” (19:10).  When anyone asks Maryam about her child she is told to say “and I will not speak (ukallim) to anyone today”.  Later, when she appears before her people, they tell her that she has done something “terrible” and emphasize that she comes from a righteous family. In her defense, Maryam points to her baby boy leading them to state incredulously, “How can we speak (nukallim) with an infant?”  Their question eventually leads to the monologue of the son where he declares he is the servant of God, a prophet and that he will cherish his mother.

“Similar to Maryam, Zachariah/ Zakariyya is told that “you will not [be able to] speak (tukallim) to anyone for three full [days and] nights” (19:10). “

Speech and Silence as a Theme of Sura Maryam

This interplay between speech and silence has led some scholars to see the theme as representing the entire chapter. For instance, Shawkat Toorawa observes the chapter begins with the command “to recollect and mention” and then starts with the prayer and petition of Zachariah/Zakariyya.[7] However, in order to fulfill the prayer, Zachariah/Zakariyya must give up speech and only communicate in signs.  Maryam calls out to her lord in her pain of labor and wishes she was forgotten. However, when she returns to her people, she is also commanded to be silent and then it is the baby Jesus/ ‘Isa who speaks.  Abraham/Ibrāhīm asks his father why he worships something that cannot hear (19:42) and his progeny is then given a truthful speech (lisān al-ṣidq 19:50). Moses/Mūsa is summoned (nādaynāhu, 19:52) and Israel is described as true to his word (ṣādiq al-waʿd, 19:54). Righteous followers of all the prophets are defined as those who fall down prostrating and weeping when they hear recitation of the divine Word.

At the end of the chapter, the Qur’an speaks directly to Muhammad stating, “We have made it easy through your speech (lisān) to bring good tidings to the pious and to warn a stubborn people” (19:98).  For Muhammad, the Qur’an’s speech comes easy to him and is both a glad tiding and a warner.  However, for the disbelievers, they don’t have the power of speech as the last verse of the chapter speaks about the destruction of previous peoples and then ends by stating, “Do you perceive anyone of them now, or hear from them the merest murmurs (rikzā) (19:98)?” Thus, the theme of speech and silence runs throughout the chapter and is an example of God’s power and ability. However, for the speechless righteous, God provides speech and defense.

The connection between fasting and silence is reminiscent of mystical and spiritual reflections on fasting such as those from al-Ghazālī (d. 505/1111).

In his magnum opus, Revival of the Islamic Sciences (Iḥyā’ al-‘ulūm al-dīn), al-Ghāzalī divides those who fast into three groups: the fasting of the masses, the fasting of the (spiritual) elite, and the fasting of the super elite.[8] He explains that the fasting of the masses is “to prevent one’s stomach and private parts from fulfilling its desires”.[9] However, for the fast of the spiritual elite is to “prevent one’s hearing, seeing, tongue, hand, feet, and all of the limbs from sin”.[10] He later explains that the fasting of the spiritual elite is to avoid speaking ill such as engaging in lying, backbiting and that “it is incumbent to be silent and preoccupy oneself with remembering God and reciting the Qur’an for that is the fasting of the tongue”.[11] He then cites the famous hadith that if one is fasting and encounters somebody who wishes to fight with him or is verbally abusive they should simply say “I am fasting” and not engage.[12] He further cites the prophetic hadith: “How many of those who fast don’t get anything out of their fast except hungry and thirst”.[13] One of the interpretations of this tradition is the person prevents themselves from eating permissible food but then “breaks their fast on the meat of people through backbiting which is impermissible”.[14]  Fasting and silence are therefore complementary and abstaining from illicit speech is essential. 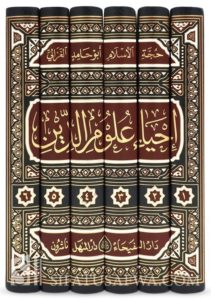 In summary, the use of the word “fasting” (ṣawm) in the story of Maryam bring us back to the meaning of “fasting” as “abstinence” and “refraining from” for a higher spiritual and even miraculous purpose.  The fasting (ṣawm) of Maryam is similar to the silence of Zachariah/Zakariyya before her and leads to the speech of the baby Jesus/‘Isa. It suggests that when one “fasts” they abstain from one thing but then provided with another whether it be the spiritual or material. It further highlights the important connection between silence and spirituality in an age of noise and chatter. Speech and response can be effective but so can silence and peace.

Younus Y. Mirza is a Visiting Researcher at Georgetown University and Director of the Barzinji Institute for Global Virtual Learning at Shenandoah University which seeks to improve America’s relationship with Muslim-majority countries.  He is currently writing a book about the Islamic Mary.  To learn more about his scholarship, teaching and speaking, please visit his website http://dryounusmirza.com

[2] All translations in this essay are taken from The Qur’ān, trans. M.A.S. Abdel Haleem (Oxford: Oxford University Press, 2008).

[3] Maryam’s “fast” is generally not discussed within the context of fasting and the Qur’an.  For instance, the article on “Fasting” in the Encyclopaedia of the Qur’an, only briefly mentions it; Kees Wagtendonk, “Fasting”.

[14] This interpretation references the Qur’anic verse 49:12 which likens backbiting to eating a person’s flesh.