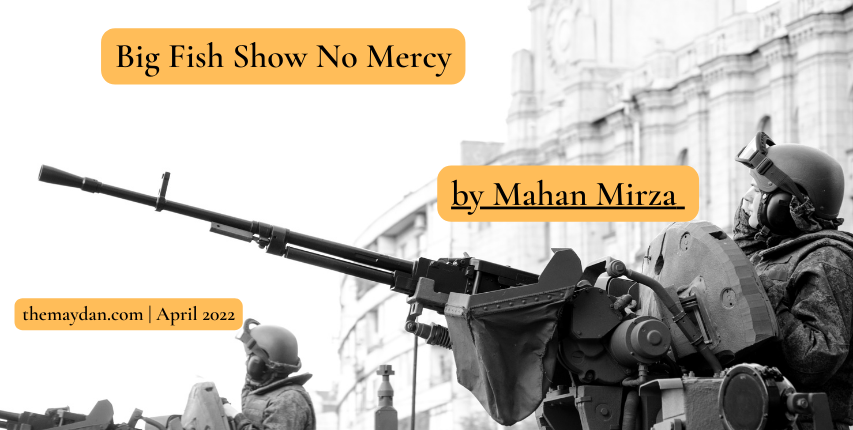 A major nuclear power invades a smaller nation with a population of about forty million, roughly the size of California, because it considers it a threat. The action to demilitarize the country and impose regime change is taken without a vote in the United Nations Security Council, in violation of international law. The move is decried by the international community, human rights organizations, and antiwar movements. The toll on the civilian population is catastrophic. Refugees flood across the border.

Which two countries does this narrative represent?

The media coverage of Russia’s invasion of Ukraine when compared to the US invasion of Iraq is a lesson in contrast. One conflict witnessed the embedded journalist, camped in Kuwait, receiving daily briefings from US Central Command (Centcom), portraying the adventures of an army liberating an oppressed people in a faraway land with smart bombs. In the other, unfolding before our very eyes, the journalist is embedded with the invaded civilian population, portraying the menace of warplanes, artillery, and explosions that harm innocents.

“The media coverage of Russia’s invasion of Ukraine when compared to the US invasion of Iraq is a lesson in contrast.”

“We see these beautiful pictures at night, from the decks of these two US Navy vessels in the eastern Mediterranean,” reported Brian Williams, as the US launched Cruise Missiles into enemy territory from its magnificent fleet. “I am tempted to quote the great Leonard Cohen: ‘I am guided by the beauty of our weapons’,” continued Williams: “and they are beautiful pictures, of fearsome armaments, making what is for them a brief flight…” Contrast this with coverage in the case of Russian missiles against Ukraine, focusing on the terror induced by air raid sirens in the population on the receiving end of such strikes.

The cause for empathy with Ukraine cannot be reduced to “Europe.” Moscow is in Europe, but it is not part of “the West,” unlike Ankara, an Asian city. Turkey, although a Muslim nation that was once the seat of the grand Ottoman Empire, is a part of the Western alliance as a member of NATO. To complicate things further, consider a country like Japan, which, although “Eastern” in culture and geography, is considered “Western” in political terms. “India Should Stand with The West Against Russia,” reads a Washington Post headline. Given these complexities of definitions and global entanglements, a vague notion of “civilizational affinity” is insufficient to explain the broadscale alignment of Western sympathy with Ukraine.

“As the West wooed Ukraine into its orbit, John Mearsheimer, a leading theorist of great power politics, predicted in 2015: “The west is leading Ukraine down the primrose path, and the end result is that Ukraine is going to get wrecked.””

Lastly, the cause cannot be reduced to concern for human suffering. An absence of parallel concern toward the suffering of Palestinians, Afghans, Iraqis, and Yemenis—to name a few familiar cases—indirectly facilitated by or directly caused by U.S. policies, testifies against human rights as being the primary factor. So, what explains the contrast? All of the factors noted above—human rights, international law, democracy, ethnicity, geography, and religion—are important but insufficient for generating the overwhelming alignment with the plight of Ukraine.

The necessary ingredient that coalesces these various factors is “great power politics,” which presumes an anarchic international system in which strong nations vie for hegemony in order to survive and flourish. Accordingly, the present outcome was by no means unforeseen. As the West wooed Ukraine into its orbit, John Mearsheimer, a leading theorist of great power politics, predicted in 2015: “The west is leading Ukraine down the primrose path, and the end result is that Ukraine is going to get wrecked.”

“Compassion,” argues the comparative mythologist Joseph Campbell, “like the will to plunder, is an impulse launched from the eyes.” The qualities of mercy, empathy, or compassion are “gifts of nature” that are “not tribal- or species-oriented, but open to the appeal to the whole range of living beings.” It is tribal elders and prophets, argues Campbell, whose teachings and mythological systems effectively limit “the permitted field of expression of this expansive faculty of the heart,” focusing it inward in relation to one’s own community, “while deliberately directing outward every impulse to violence.”

““Compassion,” argues the comparative mythologist Joseph Campbell, “like the will to plunder, is an impulse launched from the eyes.””

Empires are the final extensions of tribes in history. Their imaginary borders will eventually yield to a world without insiders and outsiders, a world in which the humanity of the Russian and Ukrainian, American and Afghan, Israeli and Palestinian, will be equally realized. Integral human development requires integral global development, which is impossible in a world rife with imperial/tribal tensions. “So that, finally, it must be asked,” inquires Campbell, “’How far does one’s mercy reach?’”

As the cold war commenced, George Kennan, director of policy planning in the State Department, noted that the United States consumes a disproportional amount of the world’s resources. According to Kennan, it was imperative for policymakers “to devise a pattern of relationships which will permit us to maintain this position of disparity. To do so, we have to dispense with all sentimentality…” The curtailment of mercy was thus articulated as a policy imperative. After the cold war ended, “The Commission on America’s National Interests” published a report to reaffirm the maintenance of supremacy as the nation’s most vital interest.

In a world order led by independent sovereign states, such a stance cannot be considered irrational. Ancient Indian philosophy affirms: the big fish eat the little fish. The Matsa Nyaya, “law of the fish,” spells disaster for lesser nations—the little fish—that find themselves unhappily in the midst of imperial struggles. Supremacy, under this law, is synonymous with survival; achieving nuclear deterrence for smaller nations is a desperate tactic for the right to exist. In effect, a nuclear armed state broadcasts to the rest of the world: “I shall not be devoured.” To channel the critic Slavoj Zizek, acts of madness are “perfectly rational acts in a world gone mad.”

The parallels for Ukraine with Afghanistan are sobering. “Battles in Donbass will look like World War Two,” reads one BBC report. “Ukraine war could last years,” reads another headline. For over a century, Afghanistan has been caught in “the great game” of dueling empires. Geography has been its downfall. It was first a buffer protecting India, the “jewel of the crown” of the British empire, from Russian expansion. In the 1980s, the theater of Afghanistan played host to the closing act of the cold war. Today, Ukraine occupies a similar buffer between Russia and “the West.” “America will fight Russia until the last Ukrainian,” quipped one Australian diplomat.

In order to protect the Afghanistans and Ukraines, the world must move away from an anarchic international system of sovereign nation states to a rules-based order with strong international institutions. A world of interacting sovereigns makes war inevitable. The Qur’an makes this argument in relation to monotheism: “Had there been any gods in the heavens and the earth apart from Allah, the order of both the heavens and the earth would have gone to ruins.” (Q. 21:22) If the universe does not have room for more than one Sovereign, how can the earth remain peaceful with many?

Former Secretary General of the United Nations, Boutros Boutros-Ghali, offered this basic idea in his Agenda for Peace: “The time of absolute and exclusive [state] sovereignty…has passed.” In other words, the big fish cannot be allowed to devour the little fish to advance their interests. The economist Jeffrey Sachs recently articulated the counterpart to this formula: “We need the UN as the core and central institution of this world…this is the only way we are going to have a civilized world.”

“We will break the law of the fish when we universalize our capacity for mercy.”

The “law of fish” has consumed many-a-peoples in the annals of history. The way to break the law is to regulate the urge to plunder; end postures designed to maintain conditions of disparity; and advance the dignity and development of all. Achieving such a world is as much a spiritual imperative as it is political. We will break the law of the fish when we universalize our capacity for mercy. We will know that we are making progress toward such a world when our collective compassion always gravitates toward the oppressed, when the journalist consistently embeds with the civilian, empathizing with the little fish, instead of choosing the easy path of siding with the tribe.

Mahan Mirza is a Teaching Professor in the Keough School of Global Affairs and Executive Director of the Ansari Institute for Global Engagement with Religion at the University of Notre Dame. Dr. Mirza previously served as lead faculty in a project to advance scientific and theological literacy in madrasa discourses in Notre Dame’s Kroc Institute for International Peace Studies (2016-2019) and Dean of Faculty at Zaytuna College (2013-2016). He holds a B.S. in Mechanical Engineering from UT Austin, M.A. from Hartford Seminary in Islamic Studies and Christian-Muslim Relations, and Ph.D. in Religious Studies from Yale University. He has taught a range of courses in Arabic-Islamic studies, western religions, the history of science, global affairs, and foundational subjects in the liberal arts including logic, rhetoric, ethics, and politics. His doctoral research was on the intellectual world of al-Biruni, an 11th-century scientist from Central Asia. Dr. Mirza has edited two special issues of The Muslim World and served as assistant editor of the Princeton Encyclopedia of Islamic Political Thought. His most recent article is titled “Deed Over Idea: Toward a Shared Caliphate,” published in the Routledge Handbook of Religious Literacy, Pluralism, and Global Engagement (2021).