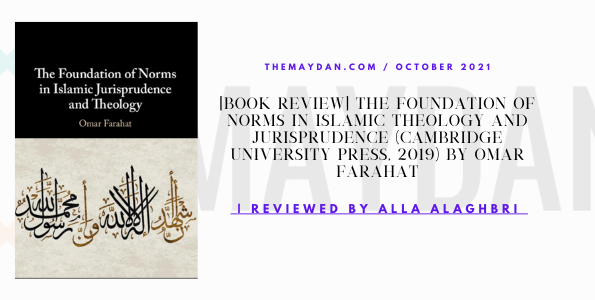 Omar Farahat’s The Foundation of Norms in Islamic Theology and Jurisprudence is a great new addition to the field of Islamic legal studies and ethics. The book poses two broad questions: how can Divine revelation generate norms for human conduct? And why is it a viable source for norm construction? In answering these questions, the author reconstructs some of the main elements of the debates about moral epistemology and norm construction within classical Islamic theology and jurisprudence. The author simultaneously puts some of the key features of these classical debates in a constructive conversation with contemporary Western moral philosophy. 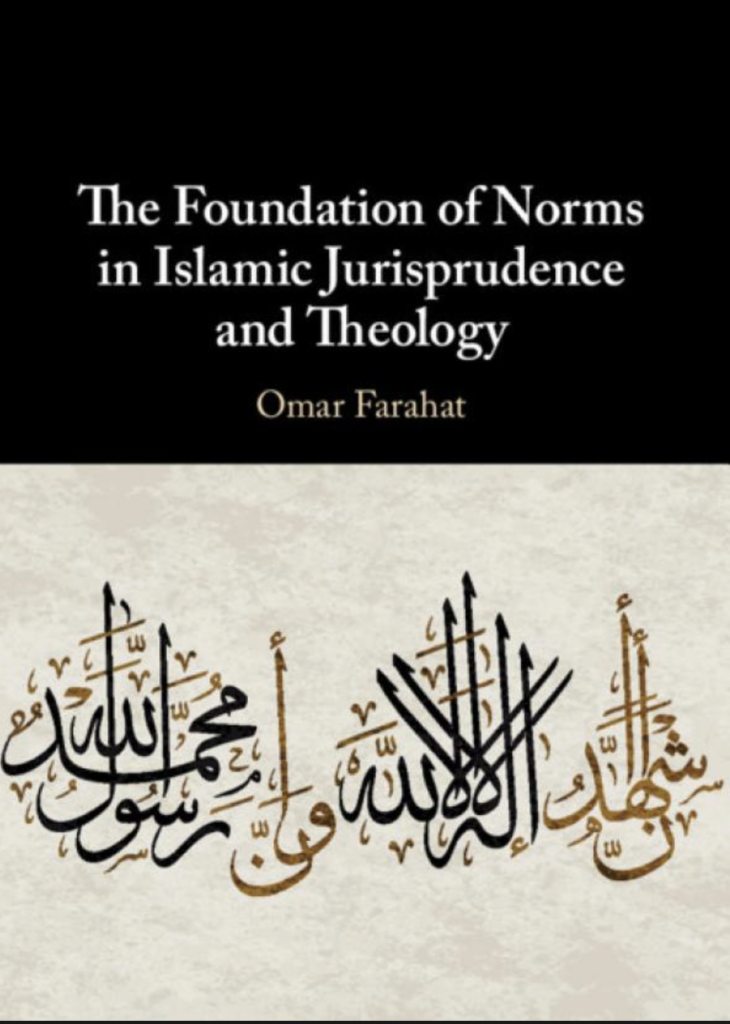 Farahat’s book makes two critical interventions: first, Farahat introduces what he calls a “dialogical approach” to the study of Islamic traditions, “one in which Islamic theology and jurisprudence are analyzed for their normative claims and based on that analysis, suggestions are made for the resolution of contemporary problems in theological and moral thought” (p.19). This approach challenges Eurocentric conceptions of historicity and the limitations it sets on constructive and conceptual projects that are informed by premodern intellectual traditions. Farahat’s second intervention is his creative interpretation of the competing theologico-ethical positions of the Ash‘arites and the Mu‘tazilites. While the dominant view in the secondary literature tends to reduce the differences between the Ash‘arites and the Mu‘tazilites theories of normativity to one of traditionalist versus rationalist approaches,[1] Farahat astutely argues that the points of contention between them are fundamentally epistemological and metaphysical in nature.

“While the dominant view in the secondary literature tends to reduce the differences between the Ash‘arites and the Mu‘tazilites theories of normativity to one of traditionalist versus rationalist approaches,[1] Farahat astutely argues that the points of contention between them are fundamentally epistemological and metaphysical in nature.”

The book is divided into two parts. The first part deals with the epistemic and metaphysical assumption that grounds theories of normativity within classical Islamic theology. The second part focuses on the jurisprudential dimensions of the question of normativity by examining key features of the debates concerning the methods of norm construction and the role of the community of scholars in that process.

In Chapter 1, Farahat examines the epistemological nature of the Mu‘tazilite and Ash‘arite debates concerning theories of normativity. He explains how these two groups of scholars differed in their understanding of the nature of knowledge and the phenomenology of its acquisition. This difference resulted in two competing moral epistemologies, one—the Ash‘arite—excluding norms and moral opinions from the category of knowledge and the other— the Mu‘tazilite— including them within its boundaries. Farahat goes on to put what he calls Ash‘arite “moral skepticism” in conversation with contemporary theistic skepticism and points out that while contemporary theistic skepticism is a position that was held largely in response to the challenge of theodicy, Ash‘arite moral skepticism is promising because it functions as “the very foundation of the mainstream Islamic justification of divine revelation as necessary for the construction of norms.”[2]

In Chapter 2, the author addresses the issue of metaphysics by examining how these two groups of scholars conceptualized the nature of the Divine and the Divine’s relation to the created world. Farahat notes how the Mu‘tazila’s conceptualization of God as similar to humans but more superior as opposed to the sharp divide drawn by the Ash‘arites between immutability of the Divine and the radical contingency of the world produced two competing notions of

Divine revelation. The former maintained that “God’s actions occur in a manner fundamentally similar to actions performed in the habitual manner observed in this world,” thus, for the Mu‘tazilites, revelation as an act of the Divine must conform to our human conceptions of good.[3] The latter’s denial of any continuity within the Creator-created divide implied that God’s relation to His creation can neither be reduced to mere causality nor can His actions be understood to occur in the same way that human actions do.[4]

Chapter 3 explores how this competing metaphysics informs the two groups’ understanding of “what it means for God to ‘speak’ to us, what that means for the role of revelation in normative thinking.”[5] Farahat tells us that, informed by a metaphysics of continuity, the Mu‘tazila held that God’s speech is an act of the will that occurs in time just as human speech. In contrast, guided by a metaphysics of difference in which there is a sharp divide between the eternal immutable God and contingent creatures, the Ash‘arites held that divine speech is an eternal attribute that inheres in the divine self but is not equal to it.

Part II moves from the foundations of norms to the methods of norm construction. In chapter 4, the author focuses on the idea and nature of Divine commands and the ways in which such commands generate different notions of compliance within Islamic jurisprudence.

Moreover, the author uses this analysis—particularly of the Ash‘arite’s position—to critique contemporary conceptions of Divine commands as arbitrary, superfluous, and restrictive of human autonomy.

In Chapters 5 and 6, Farahat examines the two competing positions that Muslim jurists took on the linguistic imperative mood of Divine speech and its normative implications. Through an analysis of the positions of the suspension of judgment and the presumption of obligation, the author explores how the discipline of Islamic Jurisprudence reveals the limitations of a strict Divine command model in the construction of norms. He explains how extra-linguistic considerations of the practicality and reasonability of norms informed the jurists’ logic of norm construction even within a Divine command-based system and how this placed the community of jurists as prime participants in the social construction of norms.

Farahat’s methodological intervention is effective in highlighting the transhistorical nature of moral-legal questions and probing the theoretical space for a cross-cultural intellectual engagement. However, it leaves us with questions about the position of the author’s work within what he calls “the promise of post-secularism.” On one hand, the nature of the post-secular is left insufficiently theorized. On the other hand, it is ambiguous whether Farahat’s work argues constructively from within the tradition of Islamic theistic ethics, or if “appropriation” is as far as one can go while being embedded within western academic-one can argue secular-discourse. Perhaps this ambiguity highlights the type of problems that Farahat along with other academic scholars seeking to produce constructive work face regarding their position vis-à-vis their tradition of expertise and the challenges of defining when one is arguing about the Islamic tradition versus when one is arguing through it.

“Farahat’s methodological intervention is effective in highlighting the transhistorical nature of moral-legal philosophy and probing the theoretical space for a cross-cultural intellectual engagement. However, it leaves us with questions about the position of the author’s work within what he calls “the promise of post-secularism.”

Overall, Farahat’s work makes very important interventions that correct and further nuance some of the dominant understandings regarding the theo-juridical traditions of the

Ash‘arites and the Mu‘tazilites. Furthermore, his creative exposition of the rich epistemological and metaphysical dimensions of these premodern intellectual traditions opens for us a window into new and refreshing set of questions that we can investigate about the various other philosophical inquiries that these traditions engaged in. Finally, Farahat’s dialogical approach forces us to think seriously about the promises and challenges that undergird constructive projects informed by the premodern Islamic tradition.

Alla Alaghbri is an MA student at the University of Chicago Divinity School. His research interests include questions of ethics and epistemology within premodern Islamic theology and jurisprudence, the relationship between kalām and uṣūl al-fiqh, and the epistemological contestations around tradition and the secular.

*The author first presented this review at the Fourth Annual Graduate Students Book Review Colloquium on Islam and Middle Eastern Studies in 2020 organized by Ali Vural Ak Center for Global Islamic Studies at George Mason University and the Maydan in collaboration with the Fall for the Book Festival.