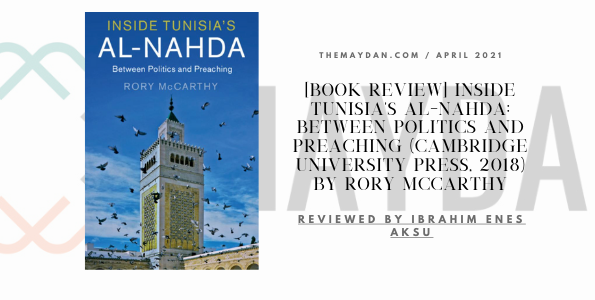 Rachid Ghannouchi, the charismatic leader of al-Nahda Party, declared that they no longer pursue “political Islam” but rather “Muslim democracy” at his party’s 10th Congress in May 2016. At that time, many people were curious whether this was just pragmatic decision to avoid marginalization or it was a genuine transformation of an Islamist movement, a movement that had once included a project of da‘wa (calling), focusing on faith, morality, and behavior, and built “an imagined solidarity” (Bayat, 2005) of common values, strengthened by a group of charismatic personalities whose impact had been scattered via the network of schools, universities, mosques, and local communities. Although Ghannouchi (2016) said that “the functional specialization between the political and other social fields is not a sudden decision or a submission to temporary pressures, but rather the culmination of an historical path in which the political work was distinct from the social, cultural, and preaching work,” his words still did not disperse the doubts around this decision.

Partially in agreement with Ghannouchi, Rory McCarthy in his book Inside Tunisia’s al-Nahda: Between Politics and Preaching convincingly argues that al-Nahda’s decision of “functional specialization…was the product of a long, strategic, and intellectual debate driven by growing disquiet among many Nahdawis about the identity of their movement after decades of repression and political exclusion” (p. 1). In this work, McCarthy seeks the best way to explain the transformation of al-Nahda from its early stages when its members first proposed an audacious political project based on a ‘comprehensive conception of Islam’ down to the present day when its leaders decided to stop fusing what they termed political work (al-ʿamal al-siyasi) and preaching work (al-ʿamal al-daʿwi). 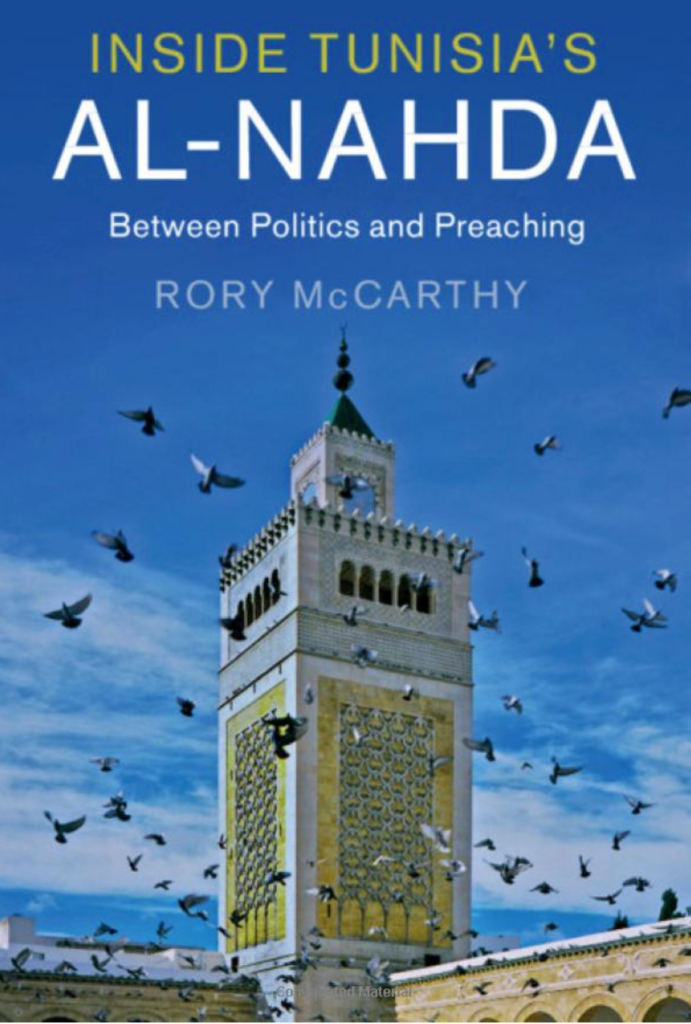 “McCarthy seeks the best way to explain the transformation of al-Nahda from its early stages when its members first proposed an audacious political project based on a ‘comprehensive conception of Islam’ down to the present day when its leaders decided to stop fusing what they termed political work (al-ʿamal al-siyasi) and preaching work (al-ʿamal al-daʿwi).”

Rather than considering al-Nahda’s experience as historically unique or anomalous, McCarthy handles this problem by focusing on “the lived experience of Islamist activism,” and seeks to answer how members first join the movement, how and why their perceptions on those actions change over time, and why members have different but somehow overlapping understandings of the movement’s primary concerns. In other words, he pursues “the genealogy of meaning-making within the movement from its origins to the present day” to shed light on “the contest and negotiation between political and preaching ambitions” (p. 3). Conducting a 14-month long fieldwork of political ethnography in the coastal city of Sousse and neighboring towns, where significant figures in Tunisian politics were born (e.g. the former prime minister, Hamadi Jebali), McCarthy’s study prioritizes the experiences of the local non-elite members of al-Nahda. He finds that their experiences sometimes seem to contradict the leadership narrative created by the ideologues of the movement. He also focuses on how Islamist activism happens offstage, outside the spotlight of the movement’s formal politics and high-ranking members. Benefitting from qualitative interviews that include lengthy formal and informal conversations with dozens of current and former members, McCarthy develops his main argument in three stages.

First, McCarthy argues that, within al-Nahda, the members’ perception on the relationship between the political and the religious has been incompatible and irreconcilable. This is because the movement first offered “a comprehensive conception of Islam,” that was ambiguous, flexible, and utopian, which helped spread the movement’s call to large numbers since different strands of the society understood different things from this encompassing idea. However, it later led to a tension within the movement between the local al-Nahda members and the leadership in exile especially in terms of their individual perceptions of what it meant to be a member of an Islamist movement. This incompatibility can also be seen in the network connections that members forged by themselves, and the activism that happened separately on the periphery of the movement. This has unsurprisingly widened the variations between those who prefer political participation for top-down reform at the state level and those who want to pursue a project of bottom-up reform aiming at society in general.

Second, the author argues that this resilience and flexibility at the local level is what has helped al-Nahda to survive without being challenged by internal disagreements during years of repression under the rule of Bourguiba and Ben Ali because the movement did not have time to fight over what they understood from this comprehensive conception of Islam. In cases of other Islamist movements in the region, studies suggest that certain organizational skills such as profound movement structure and advantageous social welfare and educational activities at the grassroot level are significantly helpful in revitalizing movements after popular uprisings. However, al-Nahda did not enjoy such qualities under the repression years, but rather it benefitted from other sources of resilience such as deep informal networks, members’ efforts to keep the Islamist project alive in their minds, and individual and collective activism on the periphery in both intellectual and organizational terms. Much of this was driven by the members’ common experience of torture and brutality in prison, and of police surveillance and social isolation after being out of a jail, and their concerted attempts to reclaim dignity not only inside the walls of prison cell but also within Tunisian society in their post-incarcerated lives.

“‘In other words, he pursues “the genealogy of meaning-making within the movement from its origins to the present day” to shed light on “the contest and negotiation between political and preaching ambitions (p.3)'”

Third, he charts how the movement went through numerous strategic and intellectual transformations to comply with the changing political setting in Tunisia. The most important one in 2016 was the irreversible strategic commitment to politicization, described as a functional specialization by the leadership, that involved “a strategy to provide legitimacy and security and to avoid marginalization during the transitional period” (p. 156), for which the movement has made significant effort to come up with an intellectual justification. This situation also proved that al-Nahda is highly adaptable to the changing circumstances but such adaptations surely come at a price in both structural and intellectual terms, which are, in al-Nahda’s case, fragmentation and demobilization.

McCarthy maintains that scholarly production on Islamist movements focuses too much on leaders, their interviews and speeches, and their public performances, and usually cares less about how ordinary members perceive the words of their leaders. He persuasively argues that focusing too much on the leadership narrative buttresses an incomplete historical view of al-Nahda, but does not show us how ordinary members actually perceived and appropriated the words of their leaders, especially those of Ghannouchi. I recall Ghannouchi saying in a conference in Istanbul that his works were read more in Turkey than in Tunisia. Also, it would be more illuminating to see the transformation of the movement and its apparent fragmentation in post-2011 period from the eyes of only a few local Nahdawis in Sousse in order to have a more consistent and comprehensive narrative. However, such drawbacks, of course, cannot overshadow the fact that McCarthy has conducted an amazing fieldwork, creating a rich data set that enables him to produce empirical and qualitative analyses on the history of everyday life of local Nahdawis as well as to contribute to the social movement studies on MENA region in general.

Ghannouchi, R. (2016). Carving a Path for Democracy and Islam to Co-exist in Tunisia. Retrieved from The Center for the Study of Islam and Democracy: https://www.csidonline.org/post/carving-path-democracy-and-islam-co-exist-tunisia

Ibrahim Enes Aksu is a PhD candidate at University of Delaware, Department of Political Science and International Relations. He studies comparative politics, focusing on national security policy-making by populist political parties. Aksu holds a BA degree from the same department at Boğaziçi University, Istanbul. He also studied his MA program at Istanbul Şehir University. His research interests mainly include comparative politics, populism, Middle East politics, and secularism. During his studies in Turkey and the US, Aksu worked as a teaching assistant at both Şehir University and UD. His email address: ieaksu@udel.edu