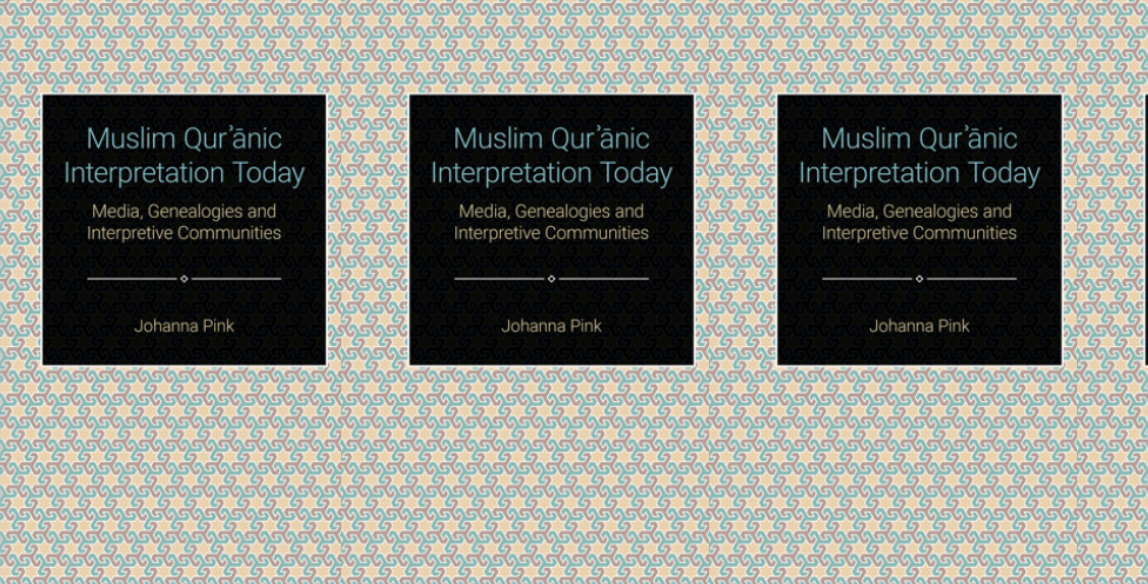 Johanna Pink’s Muslim Qurʾānic Interpretation Today examines the context in which modern Qurʾānic interpretations takes place and how these contexts shape the style and contents of Qur’anic exegesis. With the goal of presenting a transregional history of Qurʾānic interpretation, the book engages with recent studies (from the mid-2000s to 2016) and adopts the Foucaultian ‘history of the present’ approach in its analyses.

In Chapter 1, “The New Centrality of the Qurʾānic Message”, Pink argues that in the present-day the Qurʾān is “central to the Muslim discourses… to a degree that it had hardly ever been before the late nineteenth century” (14). In chapter 2, the author argues that the pre-modern exegetical tradition continues to survive and remains a source for contemporary exegetes, since “it is often impossible to make sense of the Qurʾān without some context, whether semantic or historical” (35).  For Pink, the exegetical tradition is not a ‘monolithic entity’; in fact, it has “undergone a fundamental transformation and reconstruction” (35). This is substantiated by the case of Ibn Taymiyya’s hermeneutics, which led to the promotion of his disciple “Ibn Kathīr to the top of the hierarchy of Qurʾānic commentaries” (35). Further, the chapter discusses the role of ‘ulamā’ (religious scholars) in shaping the contours of the Qurʾānic exegesis in their writings as well as on television shows and through YouTube videos. 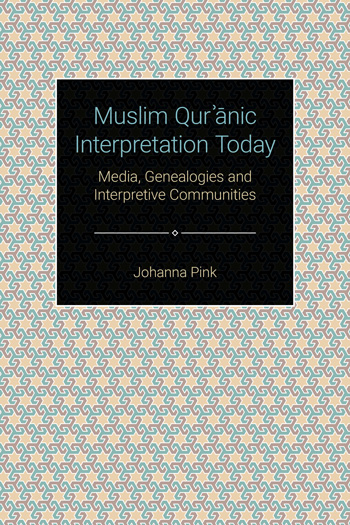 The role of media (print as well as electronic) through which the Qurʾānic interpretations are communicated is the focus of Chapter 3, which explores how the modern means of communications have replaced older ones, and began to shape Qurʾānic exegesis. For instance, we moved away from oral exegesis to manuscripts; then to printed books, then to radio and television and finally internet.

In Chapter 4, “Modernism and its Paradigms,” Pink examines modernist exegetical trends, whose central aim remains “to read the Qurʾān as a guide to social reform.” It is pertinent to mention here that the author has used the term ‘modernist’ as an umbrella term for reformists as well as revisionists and connects it with “the idea of making Islam modern” (127). She argues that Modernists often advocate for the “use of reason, rather than the authority of existing Qurʾānic interpretations” (125). In other words, they emphasize the need to find individual rational solutions to concrete problems, solutions applicable to their place and time, by using certain legal tools of Islamic law such as maslaha (public interest) and darūra (overriding need) (125).

Chapter 5, “In Defense of a Perfect Scripture: The Qurʾān as a Holistic System,” studies the ‘apologetic’ discourse around the Qurʾān. In the post-colonial era, Islam, underwent a paradigm shift as it was challenged as backward, irrational and superstitious by colonial administrators, Orientalists, Christian missionaries and secularists. Subsequently, Muslim scholarship had to (re)think how to counter these narratives. Among their responses, the author highlights three approaches that aimed to defend the Qurʾān’s divine origin and perfection:

The role of interpretive communities –locality, language, denominational background, nation state, institution or organization, ideology or status and the like– in shaping the Qurʾān’s interpretation is discussed in Chapter 6. Throughout the chapter, the author examines these interpretive communities individually with the support of detailed case studies of present-day Qurʾānic interpretation. She argues that the language in which Qurʾānic exegesis is conveyed has a tremendous influence on it. Another crucial influence on Qurʾānic interpretations is the role of the nation-state as it is involved in the imposition of language and educational curricula on its subjects. The influence of the nation-state, she contends, extends to the field of tertiary education; for example, (state-trained) ‘ulamā’, are produced and often eventually work in state-sponsored exegetical ventures such as official Qurʾānic translation. Another example is that of censorship – by issuing the certificates of approval or denial about Qurʾānic publications and exercising control over broadcasting media, nation-states exert a direct influence on exegetical activities.  Pink argues this is a “very powerful tool that may be used to supress militant Qurʾānic interpretations as well as works that are deemed overly ‘liberal’” (212-213).

Chapter 7 discusses gender and other LGBT related issues, including the same-sex marriage, arguing that a focus on gender in Qurʾānic exegesis is a “distinctly modern phenomena” (244).

“Overall, the range of case-studies in the book is very impressive, but this very fact also creates some problems.”

Overall, the range of case-studies in the book is very impressive, but this very fact also creates some problems. Pink uses many sources from a range of languages, including Arabic, English, Persian, Malay and Turkish and presents more than twenty case studies of present-day Qurʾānic interpretation, yet the specific selection of scholars, and especially their representativeness in relation to wider interpretive communities, is debatable. There are times when Pink neither gives the reference from where she borrowed the English translation of Qurʾānic verses, nor assesses these translations critically. For example, regarding the translations of Laleh Bakhtiar and Rashad Khalifa, in A. R. Kidwai’s words, the translation of Bakhtiar “retains all the centuries-old misconceptions and misperceptions spawned by the Orientalists regarding Islam, the Quran and Muslims” and Khalifa’s translation is of a “grossly atrocious breed of English translations of the Quran.”[i]

When discussing the Tafsīr of Ibn Kathīr, Pink argues that Ibn Kathīr claims to apply Ibn Taymiyya’s exegetical methodology, presenting them as authoritative. In the next breath, she argues the idea of salaf [ii]“was not his (Ibn Taymiyya) invention” (49). Then one wonders what are the interpretive principles of Ibn Taymiyya, whom his disciple presented as authoritative, throughout the book? Pink has failed to highlight them. Elsewhere, working off the abridged English translation of Tafsīr Ibn Kathīr, she claims that Shaykh Safiur-Rahman Mubarakpuri – an Indian-born Saudi-based scholar “was the main editor of Darussalam [sic] abridged version of Ibn Kathīr’s tafsīr and also the translator [sic] into English” (52). Following her references, she has relied on a website page that states Mubarakpuri supervised the translation team. This however is misleading; Mubarakpuri was neither the works editor nor did he translate it into English, yet the association with him creates a false dichotomy between the ‘Salafi Paradigm’ and other paradigms.

Pink’s statement of “Islamism is not only sources of modern apologetic discourses which started far earlier, with reformers such as Sayyid Ahmad Khan and Muhammad Abduh” is questionable as well (181-182). If we take, for example, Khan and Abduh as Islamists, then one would wonder why didn’t she engage with their exegetical works along with the exegesis of Qutb and Mawdudi? Likewise the portrayal of Khan as an ‘Islamist’ is not necessarily an accurate one as Khan believes that “Islam is in full accordance with nature’ (modern science), and thus advocates a slogan: “Islam is nature and nature is Islam.”[iii] With regards to the idea of structural coherence (Nazm),  she claims that “this approach has been taken by Tafsīr al-Manār and, roughly simultaneously, by the Indian exegete Ashraf Ali Thanawī and Hamīd al-Dīn Farāhī” (186). However, Thanawī throughout his exegesis never adopts this approach. Instead Amīn Ahsan Islāhī is the famous proponent of the idea of structural coherence, which “rejects the view that the Qurʾān, in its received form, lacks coherence”[iv] – though the author has not included him here.

“The above critiques aside, Muslim Qurʾānic interpretation Today is a significant contribution to the burgeoning field of Qurʾānic studies, one that has emerged as a vibrant field of research globally.”

The above critiques aside, Muslim Qurʾānic interpretation Today is a significant contribution to the burgeoning field of Qurʾānic studies, one that has emerged as a vibrant field of research globally. The work must be recognized for providing us a good number of case-studies from various geographies and time periods, and does an admirable job of studying various factors, including media, genealogy, and interpretive community, that play a role in contemporary Qur’anic exegesis.

Owais Manzoor Dar is currently a Ph.D. candidate in the Department of Islamic Studies, Jamia Millia Islamia, New Delhi. His research focuses on the Islamic Political Philosophy, especially South-Asian political thought in the post-colonial era and its relation with the Qur’ānic exegesis. His interests include Qurʾānic studies; and Modernist/Reformist thinkers and movements in South-Asia.

[ii] If no proof from the Qurʾān, Prophetic Sunna was available, it was permitted to look for the opinion from the Prophet’s Companions (sahāba) and if this offered no solution to the problem at hand, the next step will be to look at the generation of their ‘successors (tābi’un)).

[iv] Mustansir Mir, Coherence in the Qurʾān: A Study of Islāhī’s Concept of Nazm in Tadabbur-i- Qurʾān. (Washington, US: American Trust Publications, 1986).