In Gendered Morality (2019) Zahra Ayubi asks what it is to be a (good) human. To answer this question,  the author delves into the classical texts of three foundational thinkers in this “unified” tradition: Kimiya- i Sa‘adat (The Alchemy of Happiness) by Abu Hamid Muhammad al- Ghazali (d. 1111); Akhlaq- i Nasiri (The Nasirean Ethics) by Nasir- ad Din Tusi (d. 1274); and Akhlaq- i Jalali (The Jalalean Ethics) by Jalal ad- Din Davani (d. 1502) (47). Ayubi’s selection of sources, all in Persian, “are classical ethics treatises that are still widely regarded as the high moral tradition of Islam” whose audience take for granted a male-centered and hierarchical understanding of the social order comprised of self, home and society (6).

In chapters two, three and four, Ayubi elaborates on what makes a virtuous self as the individual–elite male in this context–. There she demonstrates the tension between metaphysics and epistemology in Islamic ethical genre. The former, Ayubi argues, is based on the metaphysical equality of matter: both men and women are equal as they are endowed with an individual soul (nafs). This equality, however, is rejected by the ethicists as they believed that “women were naturally and ontologically inferior as created by God” (5). In this “gendered and classed” schema, the role of women and lower ranked males is to passively assist elite men refine their moral selves (176). In that context, Ayubi underscores “the elite male-centered nature of Islamic virtue ethics” (22). Instead of transcending the gender matrix, she consistently applies the category of gender to these select texts, and shows the philosophical inconsistencies of the ethicists’ conception of gender through an internal critique.

“In this ‘gendered and classed’ schema, the role of women and lower ranked males is to passively assist elite men refine their moral selves (176).”

To Ayubi, Ghazali, Tusi and Davani believed that women were naturally and ontologically inferior by creation. Simply put, women lack the rationality needed for seeking ethical refinement. This complicates the assumption of scholars who interpret women and men as being equal in the eyes of God. Ayubi demonstrates the contradiction between the genre’s “male-centricism and its exclusionary definitions of humanity” and how it conceives “the nature of humanity as a whole” in an effort to bring about “cosmic justice” (22). Ayubi also shows that the elite male focus in virtue ethics texts is based on medieval gender assumptions. Examples of these assumptions can also be found in Hellenic tradition: “males are presented as the default universal, with females as derivative and subordinate; masculinity is associated with reason, objectivity, and transcendence, while femininity is associated with irrationality, matter, and immanence” (58).

In chapter 1, “Epistemology and Gender Analytics of Islamic Ethics,” Ayubi defines the akhlaq genre and traces its genealogy in Islamic history. She deconstructs these texts as parts of a “unified tradition” in that they all philosophize “about the nature of the Divine, humanity, and moral responsibility” (23). 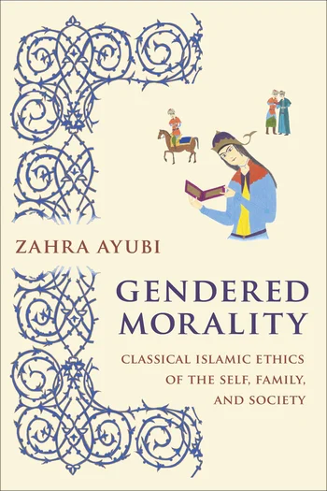 Ayubi presents the organization of the cosmology of ethical behavior on three levels: “the individual nafs (metaphysical soul), the domestic realm, and the sovereign state— each one a scaled metaphor of the others” (23). These different levels comprise the next three chapters. In chapter 2, titled “Gendered Metaphysics, Perfection, and Power of the (Hu)man’s Soul,” Ayubi shows that Ghazali, Tusi, and Davani’s conception of the individual soul is gendered male and elite. To these e ethicists,  “women are deficient in rationality and are overly emotional, and thus must be ruled by their husbands” (63).

In Chapter 3, “Ethics of Marriage and the Domestic Economy,” Ayubi focuses on gendered virtue ethics. In order to explicate masculinity and femininity in relation to each other, Ayubi analyzes the specific texts’ instructions regarding what constitutes ethical behavior in “the domestic arena, including marriage, divorce, running a household, and rearing children” (24). Since for these authors the ethical subject is normative male, it is not surprising for them “to treat men as the primary ethical subject and women as ethical objects” (24). Every form of interaction in this scheme gives primacy and agency to (elite) men. Men are in charge of “disciplining” the souls of the lesser individuals around them. This includes their wives and children. It is the duty of the wife to willingly receive instruction from her husband and to prioritize his needs for ethical refinement in the organization of domestic life.

In Chapter 4, “Homosocial Masculinity and Societal Ethics,” Ayubi examines masculinity in the context of “homosocial” interactions with other men in government and public activities including friendship and love. She argues that the focus on normative male subject leads to hierarchical association among men in society. Although the ethically refined soul is male, not all males are created equal. Similar to women, non-elite men who are lesser souls need to be managed and governed by rational elite men.

In her concluding chapter, Ayubi proposes an introduction to a feminist philosophy of Islam. One of her most significant findings is the “textual contradiction between normative male metaphysics and the overarching goals of the discipline of ethics” (25). The discipline of ethics in these akhlaq texts should address anyone with a soul. In other words, women and men (belonging to lower classes) are able to refine themselves and should be addressed as such. However, by instrumentalizing these allegedly less-rational category of souls for the utility of ethically refining elite men, the opportunity of becoming “ahsen-i taqweem” (“best of moulds” Quran 95:4) is taken away from them. Through this finding, Ayubi shows that inequalities in Islamic virtue ethics can be traced to these critical texts that are inseparable from the prevailing inequalities and gender assumptions of their times.

“…what Gendered Morality does not address is that despite the problematic implications of classing and gendering morality, these texts have played a critical role in the Islamic tradition, enabling both males and females to cultivate a better self in discursive communities over the centuries.”

Ayubi’s theoretical piece on the Islamic ethical tradition sheds light on gender differences in the making of the moral self. To her, being a man or a woman (and social class) precedes what it means to be an ethical human being for the Muslim ethicists. However, what Gendered Morality does not address is that despite the problematic implications of classing and gendering morality, these texts have played a critical role in the Islamic tradition, enabling both males and females to cultivate a better self in discursive communities over the centuries.

“Ayubi’s strength in this timely work is to place Ghazali, Tusi and Davani’s texts in direct dialogue with Western scholarship in women and gender studies.”

Ayubi’s strength in this timely work is to place Ghazali, Tusi and Davani’s texts in direct dialogue with Western scholarship in women and gender studies. In this regard, the book is a most welcome contribution to the growing field of feminist philosophy of Islam.

Hale Inanoglu holds an MA degree in philosophy and an MS degree in conflict analysis and resolution form Boğaziçi University and George Mason University respectively. She holds a PhD degree from the department of Sociology and Anthropology at George Mason University. Her dissertation focuses on Muslim women in the diaspora and is titled “Gender and Diaspora in the Making of Pious Subjectivity.”  Her work elucidates the processes and disciplining mechanisms through which women create a particular type of religious selfhood for different publics.