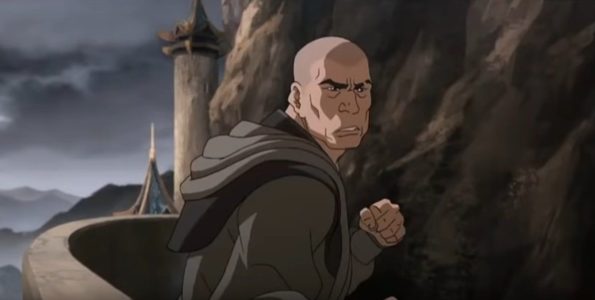 Avatar: the Last Airbender (ATLA) is an artfully woven story in which victims of genocide and imperialism unite to fight against a global empire. But in the sequel series, The Legend of Korra (TLOK), which has been receiving more attention after becoming available on Netflix last month, the avatar goes from fighting power to serving it.

In the first season of TLOK alone, we see Avatar Korra putting down a revolution and allying with a corrupt police force. We are presented with the challenges of poverty and class inequality in an emerging capitalist society, but the ultimate message seems to be that these problems are either unsolvable or not worth addressing, as a restoration of the political status-quo marks the triumphant conclusion to each of the four seasons.

But beyond these broader political failures, TLOK also speaks to an underlying and equally problematic imperialist narrative: that of a valiant fight against irrational and savage terrorists.

While ATLA is beloved for its nuanced antagonists, those in TLOK come across like bland comic-book villains representing different brands of pure evil that the audience can comfortably hate. Each season comes with a new villain who is clearly meant to represent a particular real-life “evil” ideology: communism in season 1, imperialism in season 2, anarchism in season 3, and fascism in season 4.

“While ATLA is beloved for its nuanced antagonists, those in TLOK come across like bland comic-book villains representing different brands of pure evil that the audience can comfortably hate.“

Unfortunately, the show often fails to take seriously the actual politics of the movements each villain is parodying. Season 3 is the most egregious. Its villain, Zaheer, who leads a foursome called the “Red Lotus,” is made out to be an “anarchist,” but the writers’ understanding of anarchism seems non-existent, closer to the nihilistic rambling of “the Joker” from The Dark Knight than anything actual anarchists believe. While Zaheer aims to dismantle state structures, his speeches about “chaos” being the “natural order of things” seem to fetishize mass violence and destruction. (Mind you, this portrayal bears no resemblance to actual anarchist politics.)

On one hand, Zaheer is a more interesting antagonist than Amon or Unalaq (of seasons 1 and 2, respectively), because at least he is portrayed as believing in the ideology he promotes, whereas the others turned out to be power-hungry and simply manipulating political rhetoric for personal ends.

But if you are going to write a villain with real beliefs, you can’t make those beliefs thoroughly idiotic. Zaheer fails as a compelling antagonist because we, the audience, have no idea why he wants to see the world burn, except for the fact that he keeps giving expositional speeches to our heroes about disorder and chaos. Compare this to Zuko in ATLA, who we watch hunt down Aang in a deeply personal quest to restore his honor, fulfill his destiny, and regain the approval of his father, the Fire Lord.

Zaheer’s incoherent ideology is a magnification of the same problem found with Marvel’s Thanos, a villain who wants to exterminate half of all life in the universe in order to eradicate starvation. It’s not compelling, since anyone who put any thought into the matter and  knew that Earth already “produces more than 1 ½ times enough food to feed everyone on the planet” would simply fight for redistribution of goods and capital rather than mass-murder. (No need to eliminate 50 percent of all life, the 1 percent will do just fine.) Compare this to Black Panther’s truly captivating villain, Killmonger, whose politics of global anti-racist liberation actually makes sense.

But portrayals of irrationally violent villains like Zaheer and the Joker are not just products of lazy writing. They reflect deeper American paranoias cultivated during the War on Terror. Zaheer’s villainy may be implicitly cast as “anarchism,” but his character bears a greater resemblance to a figure that has haunted the American imagination since 9/11: the fanatical Muslim terrorist.

Season 3’s final episode is the only time when the term “terrorist” is used, when we hear the president of the United Republic of Nations thank Avatar Korra for “taking down those Red Lotus terrorists.” But the entire season’s portrayal of Zaheer and the Red Lotus closely parallels the figure of the terrorist that is constantly projected in American media.

In his excellent new book The Universal Enemy (an ethnography of jihad through the lens of the Bosnian war of the early 1990s), Darryl Li notes that: “the concept of ‘terrorism’ is today useful only in delegitimizing the political actions of those stuck with the label. In other words, to call someone a terrorist is to deny any political dimension to their use of violence…” (25)

Darryl Li notes that: “the concept of ‘terrorism’ is today useful only in delegitimizing the political actions of those stuck with the label. In other words, to call someone a terrorist is to deny any political dimension to their use of violence…” (25)

Of course, “terrorism” is a useless analytical category, since it is never deployed to simply characterize violent movements based on certain tactics (i.e. weaponizing fear). Instead it is a racialized category that, as Li argues, strategically enables us to ignore the real political grievances and projects of those we label “terrorists.”

This shrouding of terrorist violence as apolitical violence produces a public discourse where terrorists are portrayed as backward savages who derive pleasure from chopping off heads. The violence of the terrorist must be pathologized and imagined as incoherent, because to allow it any coherence would be to entertain a threat to the moral authority of empire.

Zaheer plays the terrorist perfectly through his apparent fetishization of destruction and his air of mystery. In S3:E4, police chief Lin Beifong laments the unknown motives behind the violence of Zaheer’s Red Lotus: “We spent 13 years interrogating them, but they never broke. To this day no one knows what their motive was.” But this supposed secret is quickly divulged, as Zaheer readily and repeatedly explains his visions of state destruction and social chaos in later episodes.

“In the dialogue between Zaheer and Korra above, we see only two options: either chaos or a defense of state hierarchies.”

While talking with Avatar Korra in S3:E9, Zaheer proclaims, “True freedom can only be achieved when oppressive governments are torn down.” Korra’s protest, “But that won’t bring balance, it will throw the world into chaos!” is met with a smile and his manifesto: “Exactly. The natural order is disorder.” Zaheer demonstrates this commitment to chaos in the next episode, when, after assassinating the Earth Queen, he revels in the destruction of the city caused by “rioters and looters” running amok.

In the dialogue between Zaheer and Korra above, we see only two options: either chaos or a defense of state hierarchies. No coherent system of radical politics is ever considered. The only radical ideology shown to the audience is Zaheer’s terrorist-like fanatical obsession with chaos.

And is it really just a coincidence that the first Muslim-sounding names to appear in the Avatar universe belong to season 3’s band of “anarchist” (terrorist) bad guys?—the newly airbending Zaheer and Ghazan, a lavabender. Maybe the names just seemed too fitting for grizzly male villains pathologically plotting a global reign of violence and chaos.

These fictional shadowy figures of terror projected in the media reinforce views of America’s real-world enemies as incoherent and simply sadistic. Ask your average US American why al-Qaeda flew planes into the twin towers and you’ll likely get an answer regurgitated from Bush speeches about how they simply “hate our freedom,” as if Osama bin Laden was pushed to a premeditated homicidal rage at the thought of white women in bikinis.

“These fictional shadowy figures of terror projected in the media reinforce views of America’s real-world enemies as incoherent and simply sadistic.“

This narrative conveniently allows Americans to be blissfully ignorant of the political rationales articulated by bin Laden for the 9/11 attacks, i.e. resistance to the ongoing imperial domination of the Muslim world. Al-Qaeda blamed American empire (the “far enemy”) for propping up local despotic and un-Islamic regimes (the “near enemy”). Of course, many Middle Eastern regimes are sustained by American power and funding—even more now than back in 2001!

This of course isn’t an endorsement of bin Laden’s political diagnosis and strategy, but it is important to acknowledge the coherence that has powered its appeal to so many (though a minority) of those around the world searching for effective modes of resistance in a life pressed beneath the boot of American empire. The taboo nature of this very acknowledgement (I can’t imagine saying this publicly if I weren’t white) speaks to the thorough erasure of these politics. To permit the association of the violence of these terrorists with the now-celebrated (then-detested) violence of the anti-colonial freedom-fighters of the 1940s-60s (then-“terrorists”) would make us… the bad guys!

Hollywood gives us on-screen villains who mirror the type of enemies America dreams of fighting in Iraq and Afghanistan. Note that TLOK was released in 2012, in the wake of the largest symbolic victory of the War on Terror in the killing of bin Laden. The issue goes deeper than the media’s oft-critiqued constant portrayal of Muslims as terrorists. Villains like Zaheer and the Joker reinforce Americans’ assumption that the major threat we face is posed by dark figures who simply love violence for the sake of violence—the kind of villains who never incriminate us.

“Hollywood gives us on-screen villains who mirror the type of enemies America dreams of fighting in Iraq and Afghanistan. Note that TLOK was released in 2012, in the wake of the largest symbolic victory of the War on Terror in the killing of bin Laden.”

Along with shielding empire from critique, these paranoias about the threat of senseless violence also continually cast military and carceral state violence as necessary defenses against them. Americans pay trillions so that the military can “protect our freedom” (because that’s what the terrorists hate, right?) and for the police to protect our communities from vicious “superpredators” and “thugs” (or whatever the new politically correct slur is).

The maintenance of these structures of domination depends on the continued stoking—especially through media—of our fear of these specters from the dark fantasies of the War on Terror. Our job as critical viewers is to not only banish them, but to be willing to seriously consider and organize around the types of radical politics that TLOK so clumsily parodies.

Sawyer Martin French (@WharfScenery) is a lecturer at Sunan Kalijaga University in Yogyakarta, Indonesia and co-manages The Suryakanta, an Indonesian forum for reviews of academic books.