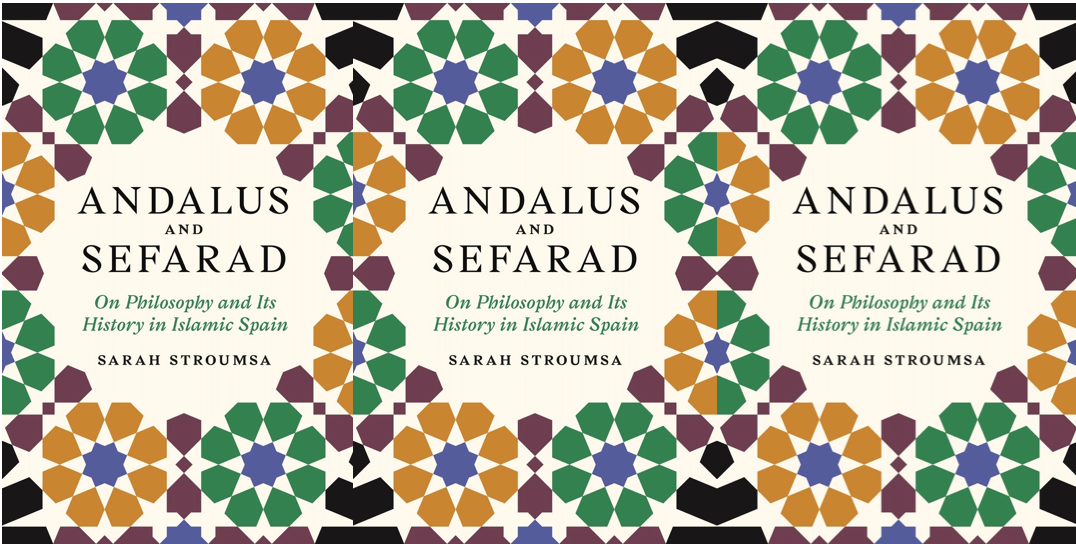 In Andalus and Sefarad: On Philosophy and Its History in Islamic Spain, Sarah Stroumsa takes a broad historical and integrative approach to Jewish and Muslim philosophy in al-Andalus, a place where thinkers from different religious backgrounds, but in search of the same answers undertook their intellectual endeavors in an engaged and interacted manner. The book covers such major topics as Aristotelianism, Neoplatonism, rationalism, and mysticism from the seventh to the fifteenth century. Although this is a wide time range, Stroumsa uses her close reading of a plethora of primary and secondary sources to paint a colorful picture of the cultural and political life of al-Andalus across these centuries, and connects these contextual details to philosophical developments of the time.

“The main objective of the book is to demonstrate the interconnectedness of Jewish and Muslim intellectual labor in the region, rather than write two separate histories of Jewish and Muslim philosophical traditions, which would inevitably neglect the impact of Jewish thought on Muslim thinkers or vice versa.”

The main objective of the book is to demonstrate the interconnectedness of Jewish and Muslim intellectual labor in the region, rather than write two separate histories of Jewish and Muslim philosophical traditions, which would inevitably neglect the impact of Jewish thought on Muslim thinkers or vice versa. Stroumsa seeks to emphasize how developments in each intellectual tradition may be explained, in part, by studying the other. Written in an elegant style, Stroumsa’s book is structured in five chapters. 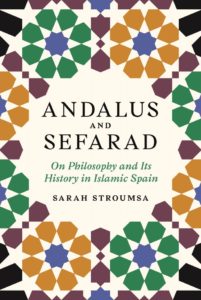 The introduction provides territorial and chronological information on al-Andalus, as well as information about religious communities and philosophical schools in the region. Chapter One deals mainly with a Muslim mystic and philosopher, Ibn Masarra, his search for the true knowledge of divine unity and his connections to Kairouan, which was known as one of the centers of Jewish learning. Chapter Two examines theological and legal life in al-Andalus, which was dominated by two Muslim schools of thought: Mutazilism and Zahirism, and their two Jewish counterparts, the Karaites and the Rabbinic school. Chapter Three discusses the role and responsibilities of intellectuals and communal leaders such as courtiers, philosophers, and poets. Regardless of their religious background, all these figures shared a common goal of constructing a perfect state in Muslim Spain.

Chapter Four focuses on Neo-Platonism, which was a widespread tradition in the eleventh and twelfth centuries in the Islamicate world. For example, Salomon Ibn Gabirol’s The Source of Life, and Al-Batalyawsi’s Circles, were heavily influenced by Neoplatonic ideas. In the same chapter, a special section is devoted to what Stroumsa calls the Hybrid Philosophers, who had been bridging the dual worlds of philosophers and Kalam scholars; and Neoplatonists and Aristotelians. Stroumsa points out that while all these groups had an embedded Aristotelian worldview, there was a blatant difference between those who operated within the Aristotelian world and those who operated within the Plotinian and Pseudo-Pythagorean theological corpus. This ambiguity was more clearly observable in Jewish thinkers, who were less constricted to scholastic traditions. Judah Halevi, Abraham Ibn Daud, and Maimonides who were just a few among many who identified themselves with the Aristotelian school on the one hand, and employed mystical Neoplatonic explanations for their metaphysical questions, on the other.

Chapter Five argues that the Aristotelian features in philosophy gained momentum in the twelfth centuries, mainly due to the rise of an Aristotelian Neo-Orthodoxy as well as allegedly to the revolts in al-Andalus. This rigorous manifestation of Aristotelianism, according to Stroumsa, was very visible in Ibn Bajja’s  treatises. Abu Bakr Muhammad ibn Yahia ibn al-Sayigh Ibn Bajja ( known as “Avempace” in Latin) was a relevant Andalusian physician and philosopher whose works were written during the Almoravid period (1040–1147). The Aristotelian imprint was more present in Averroes’ (Ibn Rushd) and Maimonides’ works during the Almohad period (1121–1269). Under the Almohads, Jews maintained their connection to Neoplatonism, but Muslims slowly and surely began to embrace rationalist Aristotelian philosophy, distancing themselves from mystic Shi´i Ismaili Neoplatonism. Maimonides’ Thirteen Articles of Faith are an excellent example of the Almohads’ ideological influence on Jewish thought, though he completed most of his work outside of Almohad territory.

Despite the Aristotelian domination, Neo-Platonic mystical philosophy continued to survive in thirteenth century Muslim Spain and can be found in the works of several important intellectuals and mystics such as Ibn Sab’in and Ibn Arabi. In a way, the legacy of Muslim and Jewish philosophy continued in the Iberian Peninsula after the Christian Reconquista, when the Almohads unexpectedly lost power.  The corpus could very easily have disappeared if it had not been for a Jewish family in Provence. The Ibn Tibbon family, together with other families (Kalominos, among other) were trained in the Arab-Andalusian culture and saved and preserved the inheritance by translating works of this cultural tradition.

Up until the fifteenth century, Arabic philosophical and scientific corpus had been transmitted to the Christian world through translations, and Jewish thinkers were the main agents of these translation projects. It is in this corpus that we can detect what is called by Stroumsa “the Common Ground,” resulting from direct contact between Jews and since the time of Ibn Masarra. Even though it is difficult to identify the exact path of transmission, shared themes in Andalusian speculative thought such as the interpretation of divine attributes and the meaning of Tawhid (God’s Unity) may easily be identified in the works of such great Muslim and Jewish philosophers as Ibn Masarra, Ibn Gabirol and Maimonides.

“Stroumsa’s book offers a new and comprehensive approach to the history of Jewish and Muslim philosophy and permits us to capture the magnificent philosophical developments in Muslim Spain.”

Notwithstanding these outstanding strengths of Stroumsa’s work, the reader would have appreciate more concrete evidence on the exchanges and how Jewish and Muslim philosophers influenced one-another. As a wonderful  piece of scholarship,  this book may invite scholars to further engage on these exchanges. Same can be said in regards to the book’s engagement with broader field of mystic studies. Because there was by all accounts a major Islamic influence on Jewish mysticism in Iberia of the period rather than vice versa, the book can set a solid departure point for the research on the inter influence on mystics in Al-Andalus and its legacy.

In short, Stroumsa’s book offers a new and comprehensive approach to the history of Jewish and Muslim philosophy and permits us to capture the magnificent philosophical developments in Muslim Spain.

Yolanda Antin received her PhD in Hebrew Philology at the University of Barcelona and specialized in Medieval Sephardic Religion, Philosophy, Prayer, and Kabbalah at the Hebrew University of Jerusalem. She obtained a postgraduate degree in Publishing of Scientific Texts by Pompeu Fabra University of Barcelona. Dr. Antin has a wide experience of more than 16 years working with international NGOs and  with Foundation for Development and International Health, where she has been developing her career as Project Manager and Partnerships Officer.