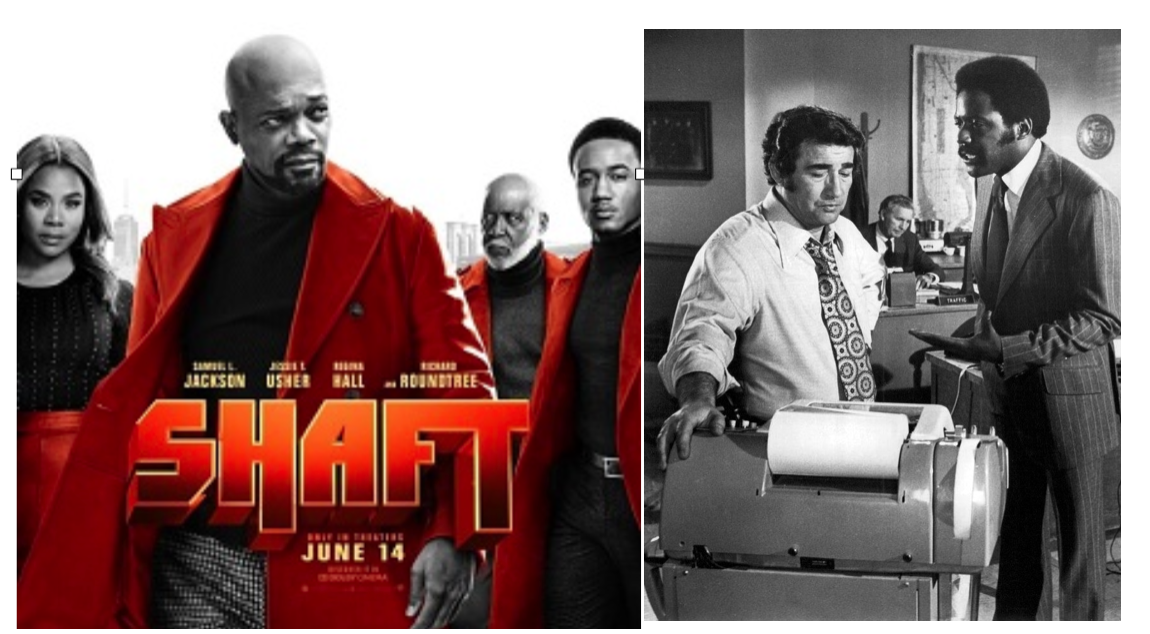 An earlier version of this essay appeared  on Atlanta Muslim on June 20, 2019.

As a civil rights attorney with the Georgia chapter of the Council on American-Islamic Relations, most of the emails I receive involve deadly serious topics: hate speech…hate crimes…discrimination…Donald Trump’s latest tweet. So you can perhaps imagine my surprise when I received an email last year from a casting director for the latest sequel to the classic blaxploitation film Shaft, which was filming in Atlanta.

Was this a mistake? I wondered. What in the world could the infamously profane and promiscuous black detective have to do with the Georgia Muslim community?

As it turns, the plot of the new Shaft revolves around the mysterious death of Shaft Junior’s best friend, a Muslim. The studio was searching for more Atlanta Muslims to participate in scenes depicting an Islamic funeral and a prayer service.

Good for the studio, I thought. After all, American Muslims have spent decades watching themselves depicted as crazed terrorists, conflicted terrorists, secret terrorists, or token Muslim law enforcement agents tracking down terrorists.

Hollywood’s more recent attempts to showcase diversity by introducing Muslim characters who aren’t terrorists has resulted in the opposite extreme: widespread depictions of selectively “secular” Muslims disregarding the traditions of their faith.

For example, the Hulu show Ramy vividly depicts the sexual dalliances of the Muslim title character with his various girlfriends. In the cable show American Gods, a Muslim man engages in sex acts with—literally—an Arab demon. The CBS show The Red Line features a graphic sex scene between a Muslim man and his boyfriend. Aziz Ansari’s Master of None dedicates an entire episode to the main character’s decision to eat pork in front of his Muslim parents.

Even back in 1998, The Siege depicted a Palestinian Muslim CIA informant in a sex scene with his CIA handler (spoiler alert: the Palestinian turns out to be a terrorist). And let us not forget the climax of the 1992 Aladdin, when Jasmine saves the day by distracting/seducing Jafar while dressed like Jabba the Hutt’s sex slave.

In other words, Hollywood has jumped from depicting Muslims as religious extremists to extremely irreligious. In doing so, filmmakers have skipped over and ignored the mainstream members of our community who do not blow things up, much less engage in sexual escapades with CIA agents and demonic forces.

Hence my hope for Shaft. Perhaps a film series with a legacy of commentary on racism would tackle Islamophobia and portray the American Muslim community in a more accurate light at the same time.

Fast forward one year, and Shaft has been released. What’s the verdict? Even with good intentions, Hollywood still struggles to portray Muslims accurately or fairly, much less positively.

To understand how Shaft went wrong, you must first understand its plot. Long story very short: Shaft Junior is an FBI data analyst. His best friend is Kareem, a Muslim-American war veteran who struggles with PTSD and substance abuse. When someone murders Kareem, Shaft Junior asks his estranged father to help solve the case.

“Fast forward one year, and Shaft has been released. What’s the verdict? Even with good intentions, Hollywood still struggles to portray Muslims accurately or fairly, much less positively.”

So far, so good, I thought. Even though Muslim-American characters shouldn’t need to die as war veterans in order to be treated like human beings, I figured I could stomach the “model minority” trope. After all, it was better than the alternative of Kareem turning out to be a terrori—oh, wait. I spoke too soon. Kareem might have been a terrorist.

Turns out, the FBI is investigating the mosque he attended because its imam often travels to Afghanistan. The mosque also received a mysterious $500,000 donation from a suspected drug front. Maybe, Shaft and his son theorize, Kareem was involved in a plot to smuggle drugs from terrorists in Afghanistan to drug dealers in Harlem in exchange for $500,000.

When Shaft and his son visit the mosque to interview Kareem’s grieving fiancé, her father—the imam with the suspicious travel history—shows up with a posse of angry bearded men, screams about how it’s inappropriate for the Shafts to speak with his daughter, and orders them out.

“For some reason, Shaft suddenly transforms from a racial justice warrior into a MAGA Twitter troll, asking the imam out-of-the-blue: ‘Are you one of those Muslims born in a Muslim country, or did you come to Allah in a prison cell?'”

For some reason, Shaft suddenly transforms from a racial justice warrior into a MAGA Twitter troll, asking the imam out-of-the-blue: “Are you one of those Muslims born in a Muslim country, or did you come to Allah in a prison cell?”

That wasn’t the film’s only tone-deaf non-sequitur. When Shaft Junior grunts “Jesus!” in frustration at the news that his friend Kareem might have been a terrorist, Shaft mockingly corrects him, “No. Allah.”

As I watched these scenes unfold with a ballooning sense of dread, I couldn’t figure it out: is this flip-flopping movie trying to humanize Muslims or perpetuate Islamophobia? Perhaps unintentionally, Shaft does both.

By the end of the film, we learn—in a muddled bit of exposition—that the mosque and its imam were innocent. So was Kareem, who was murdered when he attempted to expose a plot by a group of his fellow veterans to smuggle drugs into Harlem. Shaft Junior also criticizes the FBI for “racist” spying tactics, turns down a promotion, and quits.

Using such a plot twist to subvert audience expectations, and force audiences to confront their own biased assumptions, might seem like a clever way to undermine stereotypes.

Iron Man 3 tried the same thing when it spent an hour depicting Ben Kingsley’s arch-villain the Mandarin as a stereotypical Arab terrorist before revealing (spoiler alert) that he was a fiction created by a crazy rich American playing both fireman and arsonist in order to achieve world domination.

The problem with Shaft is that its attempt to accomplish the same goal was so belatedly revealed, and so clumsily executed, that the film did more harm than good.

By portraying a mosque as a dangerous and unwelcoming environment, an imam as a hysterical and controlling father figure, and Muslim characters as potential terrorists, Shaft spent most of its runtime reinforcing the worst stereotypes about the Muslim community. Trying to unring the bell with a last-minute plot twist hardly undoes the damage.

It’s also worth noting that if Muslim advisers reviewed the film’s script, they missed a spot: in one unintentionally amusing scene, Shaft Junior keeps referring to the suspicious $500,000 mosque donation as zagat, like the restaurant survey, instead of zakat, the annual Muslim tithe.

“It’s also worth noting that if Muslim advisers reviewed the film’s script, they missed a spot: in one unintentionally amusing scene, Shaft Junior keeps referring to the suspicious $500,000 mosque donation as zagat, like the restaurant survey, instead of zakat, the annual Muslim tithe.”

In hindsight, Shaft’s failure should not have surprised me. Hollywood has been accidentally or deliberately mishandling Muslim characters ever since Chuck Norris battled Lebanese terrorists in Delta Force.

What is surprising about Hollywood’s Islamophobia problem is that it has persisted into the Trump era despite attempts by the industry’s increasingly diverse and liberal membership to address Islamophobic stereotypes.

Even recent films spearheaded by African-American creators—who normally provide Hollywood’s rare positive depictions of Muslims—are not immune to the stubborn influence of Islamophobia.

Take Black Panther, directed by Ryan Coogler. Despite Islam’s long and rich history in Africa, the Marvel film’s only Muslim characters were terrorists who kidnapped young women and forced them to wear hijabs, à la Boko Harm. Just to make it extra clear that the kidnappers were Muslims, one of them even shouts, “Wallahi (by God), I’ll kill her!”

Denzel Washington received an Oscar nomination for playing Malcolm X in Spike Lee’s nuanced and largely accurate depiction of Islam and Muslims. Yet in The Equalizer 2, Denzel’s vigilante character goes undercover as a Muslim—he wears a skullcap and pastes a giant fake beard on his face—in order to save a young blonde girl from her Middle Eastern father, who has absconded with her alongside a gang of thugs.

Let’s not even dive into the Aladdin debate.

All of this begs the question, what should American Muslims do? Throw our television sets out of second-floor windows? Shun careers in the entertainment field?

Tempting, but implausible. Whether we watch or not, and whether we participate or not, American Muslims continue to feel the impact of the media, which has been influencing the public’s perception of our community for decades.

With that in mind, American Muslims interested in pursuing careers as writers, actors or directors should do so without compromising their values or selling out their community. That might require Muslim actors to skip their first chance at a big break by declining the role of Terrorist #1 or by refusing to perform a sex scene.

Mainstream American Muslims must also write our own scripts, produce our own short films, use alternative media platforms, and pool our resources to support such efforts.

Most importantly, the broader Muslim community must not celebrate any and every appearance we make on a screen. Sometimes not showing up at all is better than being used and abused.

“Most importantly, the broader Muslim community must not celebrate any and every appearance we make on a screen. Sometimes not showing up at all is better than being used and abused.”

Finally, those Hollywood filmmakers who do want to accurately and fairly depict American Muslims should invite mainstream Muslim leaders and organizations to offer input on scripts that feature Muslims. Calling for us to act as extras, or sit on a nominal advisory panel, or watch a private screening of the final product after the fact, does little good.

Here’s hoping that American Muslims end up co-writing the scripts for these promising films, not critical reviews about the films after they premiere.

Edward Ahmed Mitchell is a civil rights attorney who serves as executive director of the Georgia chapter of the Council on American-Islamic Relations. He previously served as a criminal prosecutor for the City of Atlanta. Edward is a 2009 graduate of Morehouse College, and a 2012 graduate of Georgetown University Law Center.