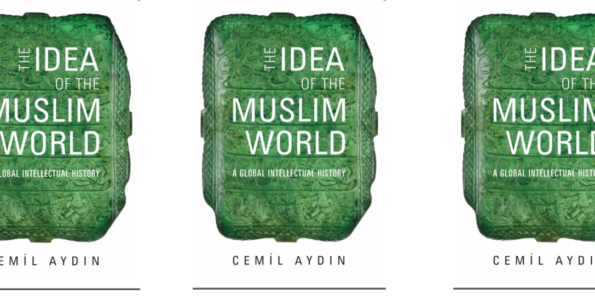 “In tracing a transhistorical genealogy, Cemil Aydın offers a skilled look at Muslim encounters with the wider world.”

In a December 2017 speech, Donald Trump announced what he had thought as “obvious:” the capital of Israel is Jerusalem, a city “where Jews pray at the Western Wall, where Christians walk the Stations of the Cross, and where Muslims worship at the Al-Aqsa.” He wanted everybody to “maintain the status quo” and scheduled the American embassy’s relocation to Jerusalem on 14 May 2018, on the day Israel had declared its independence seventy years ago. But the whole idea proved unacceptable for the President of Turkey. Recep Tayyip Erdoğan interposed by drawing on Jerusalem a “red line,” no Jewish capital. On his invitation, fifty-seven Muslim leaders came to Turkey to discuss the matter with him. In an Istanbul Declaration on Freedom for Al Quds, they rejected US President’s “illegal” schedule and instead urged “a just and comprehensive peace” for Jerusalem, a city “in the hearts and minds of the Muslims” as well as Christians and Jews. In reprisal, they declared East Jerusalem as Palestine’s capital.

An extension of the Israel-Palestine conflict, this conflict over Jerusalem is the latest showcase of how political leaders claim and represent the Islamic world writ large. Scholars such as Karen Armstrong and Jacob Landau have studied Jerusalem and how Islamist agency forms political clout to weather global and local challenges. Peter Mandaville’s study of Global Political Islam explains the intertwined nature of this agency through a cast of Egypt-based Muslim Brotherhood. However, it is somewhat disappointing that much of the literature is academic, specific, and essentialist, generally reducing the Muslim polity into an affair of the past or present. In tracing a transhistorical genealogy, Cemil Aydın offers a skilled look at Muslim encounters with the wider world.

“The Idea of the Muslim World opens with the early Madinan State and ends with the modern global discourse. The first two chapters survey the more distant history, the middle chapters address various formative changes that occurred between 1878 and 1924, and the last two chapters explain wartime realignments that reflected and shaped the abode of Islam.”

The Idea of the Muslim World opens with the early Madinan State and ends with the modern global discourse. The first two chapters survey the more distant history, the middle chapters address various formative changes that occurred between 1878 and 1924, and the last two chapters explain wartime realignments that reflected and shaped the abode of Islam. Ultimately the chapters observe the imaginary Muslim body changing from a fluid entity of early ages into a racialized polity of later generations. A result of East and West relations, this momentous change served some Eastern and Western actors at the same time.

What is called the Muslim world today was not a civilizational bloc. It was an idea. An idea that was paradoxically imagined as an imperial scheme to racialize the Muslims and as a Muslim backlash against it. Conflicting yet collaborating, these Islamists and Islamo-phobes in Aydın’s narrative may remind us of the natives and settlers in Frantz Fannon’s classic The Wretched of the Earth (Fannon argues that sooner or later, the native will mirror the settler in their mind and act). The Muslim world likewise came into being in the midst of colonial action and local reaction. It did not come into being because it had an idyllic past worth recovery.

Many Islamist scholars calibrated their views with changing circumstances along the way. Aydın shows that from the Ottoman Empire to the British India, Namık Kemal, Jamaladdin al-Afghani, and others produced comparable reactions to the imperialist views of Muslims as an inferior race. Emulating European civilization, however, they in the same breath accepted their perceived identity and rejected their collective inferiority. The idea of a global Muslim unity gained relevance and more currency due to later scholars such as İsmail Gaspıralı and Rashid Rida who philosophized, politicized, and popularized it as a fact. It is not a coincidence that in two decades around 1900, the Ottoman caliph and flag became the de facto leader and banner of the Muslim world.

“Overall, Aydın’s narrative serves a cautionary reminder that modern elites are still looking through a distorted lens ‘as befit their global and regional rivalries.’ (235) And further afflicted by amnesia, their worldviews remain resistant to criticisms.”

Against a backdrop of intellectual movements, the latter chapters identify several ruptures that nearly destroyed the possibility of a united front. Strikingly, Muslim idealism thrived after the caliphate ceased to exist in post-1924 context. Eager to marshal social capital to fight imperialism, Islamist elites once again aligned their views with global and national trends. From World War II to the Cold War, the abode of Islam moved into a realm of fantasy in part because of the localizing effect of nationalism. Then the terminus of the Muslim world has become political divergence. Overall, Aydın’s narrative serves a cautionary reminder that modern elites are still looking through a distorted lens “as befit their global and regional rivalries.” (235) And further afflicted by amnesia, their worldviews remain resistant to criticisms.

Several other reviews take issue with Cemil Aydın’s presentation. According to one review, The Ideal of the Muslim World is “anachronistic,” “erratically misspelled,” and it “misses the opportunity to elaborate and theorize. Indeed, it segments a complex history into discrete units, spells some Arabic characters in Turkish, and arouses one’s curiosity about the appeal of a united Muslim front narrative. But it is still one of the field’s important books to be published last or any other year. It beautifully weaves the many threads of global Muslim discourses. It is a panoramic view ranging from Turkish and Indian rulers who allied each other’s foe to Iranian Ayatollah Khomeini who wished author Salman Rushdie dead because his book had demonized sacred texts. By telling new and old stories together, Aydın affords students and general readers a good introduction to Islam as a lived religion. It is also an impressive book for its broad strokes and it is a must-read for scholars in the field. As long as the Muslim world is imagined and debated as in the latest declarations on Jerusalem and al-Quds, The Idea of the Muslim World promises to inspire future studies and stimulate civic discussions.

*Emrah Sahin is a transnational historian focusing on how political forces relate to social exchanges taking place within and beyond national borders. Exploring why Muslims treat non-Muslims the way they do, his first project resulted in a recent book titled Faithful Encounters: Authorities and American Missionaries in the Ottoman Empire. He is currently working on globally-oriented Muslim views of ethnicity, equality, and morality. This project includes a localizing narrative of ongoing debates over secularism, and a critical study of six travelers who told the Islamic world about Europe and America. Professor Sahin is a senior lecturer at the University of Florida, where he is teaching global studies, religious violence, Islam, Europe, US in the Middle East, Mediterranean world, world cities, Muslim migrations, Turkey, and the Ottoman Empire.