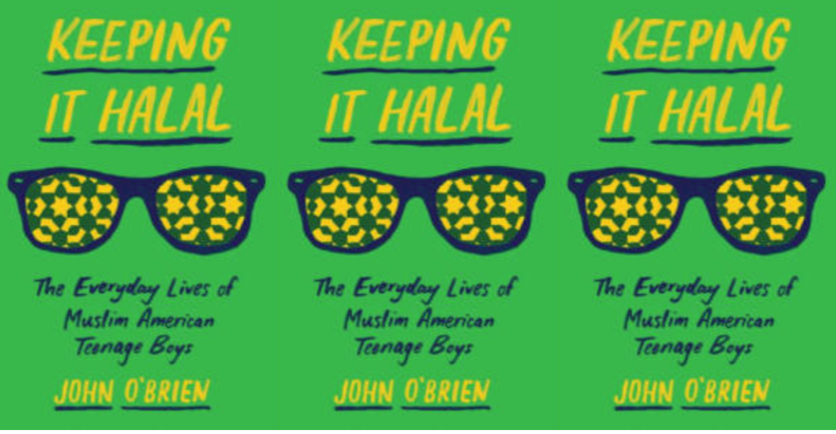 This book review by Hale Inanoglu was first presented at the 2nd Annual Graduate Student Book Review Colloquium on Islamic and Middle Eastern Studies organized by the Ali Vural Ak Center for Global Islamic Studies at George Mason University & The Maydan. This is a slightly revised version of the paper delivered at the Colloquium.

In his ethnography Keeping It Halal: The Everyday Lives of Muslim American Teenage Boys, John O’Brien demonstrates how a group of Muslim boys practicing hip hop live “culturally contested lives.” The group, whom O’Brien calls the Legendz, includes seven working class immigrants who are all second – generation Muslims in a large suburban mosque, the City Mosque: two Jordanians, two Sudanese, two South Asians and one Somali. Constructing a self that is simultaneously Muslim and American, pious and cool, creates tensions these adolescents resist and adapt to in their coming of age. O’Brien humanizes “his friends” as young Muslims in America through his field work which took almost four years to complete. The central argument of the book is that in “their constant negotiations over lifestyle options, ongoing efforts to construct desirable identities, and fundamental concerns about social acceptance and being cool, young American Muslims are as thoroughly and fundamentally teenagers- and American teenagers, as they are Muslims”(xxi). With this, the book also serves as a refutation of the argument that “there is simply something fundamentally different about Muslims when compared to other Americans” (xxii).

Chapter One, “The Culturally Contested Lives of Muslim Youth and American Teenagers,” depicts the tensions that arise out of occupying culturally contested spaces for these young men. O’Brien follows the Legendz not just in the City Mosque, as they self-identify and practice being Muslim, but also as they are expected to live a social and cultural life that is recognizably adolescent American. The everyday lives of these young men is characterized by the presence of “two competing sets of cultural rubrics: urban American teen culture, as manifested in their schools, peer groups and the media they consume, and religious Islam, as locally practiced in their mosques and by their families”(7). The author argues that they creatively craft solutions that are sufficiently “Islamic” and acceptably “American.” Chapter Two, “Cool Piety,” focuses on conceptual constructs such as “Islamic listening” and “listening like a cool Muslim”; it also explains how the teens pivot away from piety to infuse their communal Muslim selves with American pop cultural styles. Hip hop is both a way to gain acceptance and make connections with a broader American community of Muslims; it is actively adopted in creative ways by the Legendz to develop their own in-group Muslim American identity. O’Brien refers to the resulting identity performance as cool piety. An excellent example of coolpietyis changing in part the lyrics of “Lean like a Cholo” by the rapper AKA Kilo. By referring to this song and its content, one of the boys evokes a symbolic distance between himself and the orthodox Islamic behavior, suggesting that he and his friends are familiar with such songs, lyrics and behaviors within the space of the City Mosque.

Chapter Three, “The American Prayer,” demonstrates how the Legendz use discursive individualism to shift emphasis from the collective to the individual as they practice the obligatory daily prayers. The Legendz’ members determine when to pray on their own without being forced to pray “on time” right after the call to prayer. Their practices demonstrate their ability to resolve the tension between externally imposed religious and communal authority, and American teenage priorities of personal autonomy and individual agency.

As the title suggests, Chapter Four, “Keeping it Halal and Dating while Muslim,” explicates the Legendz’ problematic dating practices. “Keeping it Halal” (Islamically appropriate) model of dating sets clear limits on physical intimacy and emphasizes emotional similarity between romantic and religious devotion. In contrast to boys who were “keeping it Halal,” boys who were “dating while Muslim” actively resist attempts to set their romantic relationships within an Islamic cultural framework. Those who practice “dating while Muslim” avoid speaking about physical intimacy with any specificity and incorporate community associated courtship practices in more implicit rather than explicit ways. The second model involves interactional ambiguity and understatement rather than clarity and specificity enhanced through three strategies: decentering Islamic discourse in dating, resisting a specificity of halal and haram, and maintaining a low-key and unmarked Islamic propriety. “Dating while Muslim” is less stressful and more sustainable (82).

Chapter Five, “On Being a Muslim in Public,” explores the methods the Legendz use to present their public Muslim selves. The presentation of an identifiably public Muslim self involves three simultaneous strategies: the first is a strategy that downplays the centrality of Islam, or a self-presentation style that is referred to as “low-key Islam;” second, the active demonstration of capacities and skills associated with American urban youth culture, or an emphasis on their American abilities; and third, a rhetorical and manifest expression of boys’ autonomy and agency, especially in response to discrimination, or handling harassment (116).

“This book falsifies the hypothesis that there is something fundamentally different and un-American about Muslims who grow up in America.”

Finally, Chapter Six, “Growing up Muslim and American,” is basically a reiteration of the themes that run throughout the book where O’Brien, through his in-depth study of the Legendz, refutes claims that they are not American enough or not Muslim enough. This book falsifies the hypothesis that there is something fundamentally different and un-American about Muslims who grow up in America.

“While O’Brien’s account implicates that these American boys are ‘handled’ or ‘harassed,’ the book does not explicitly tackle with the indispensable question of race and Islam.”

And yet O’Brien’s timely work overlooks intersectionality, and in particular race, in his depiction of the young Muslim male self in the U.S. sociopolitical landscape. Of the six chapters only Chapter Five focuses on how the Legendz present a Muslim public self through their interactions with what sociologists call the “out-group.” Chapters Two, Three and Four deal with mainly in-group dynamics and obscure the racialization of Muslims in the current US context. While O’Brien’s account implicates that these American boys are “handled” or “harassed,” the book does not explicitly tackle with the indispensable question of race and Islam. As Eric Love states in his monograph, Islamophobia and Racism in America (2017), “race and Islamophobia are intrinsically linked in a vicious cycle” (14). Further, by focusing on a small sample of second generation immigrant Muslims, O’Brien’s work overlooks Black Islam and Black Muslims that make up a third of the Muslim population in the U.S. Keeping it Halal would greatly benefit from explicitly integrating race and race relations into its broad thematic universe.

In a beautifully written prose, Keeping It Halal vividly and analytically illustrates the everyday lives of Muslim American teenagers. In this regard, it is a most welcome contribution to the growing field of American Muslim studies.