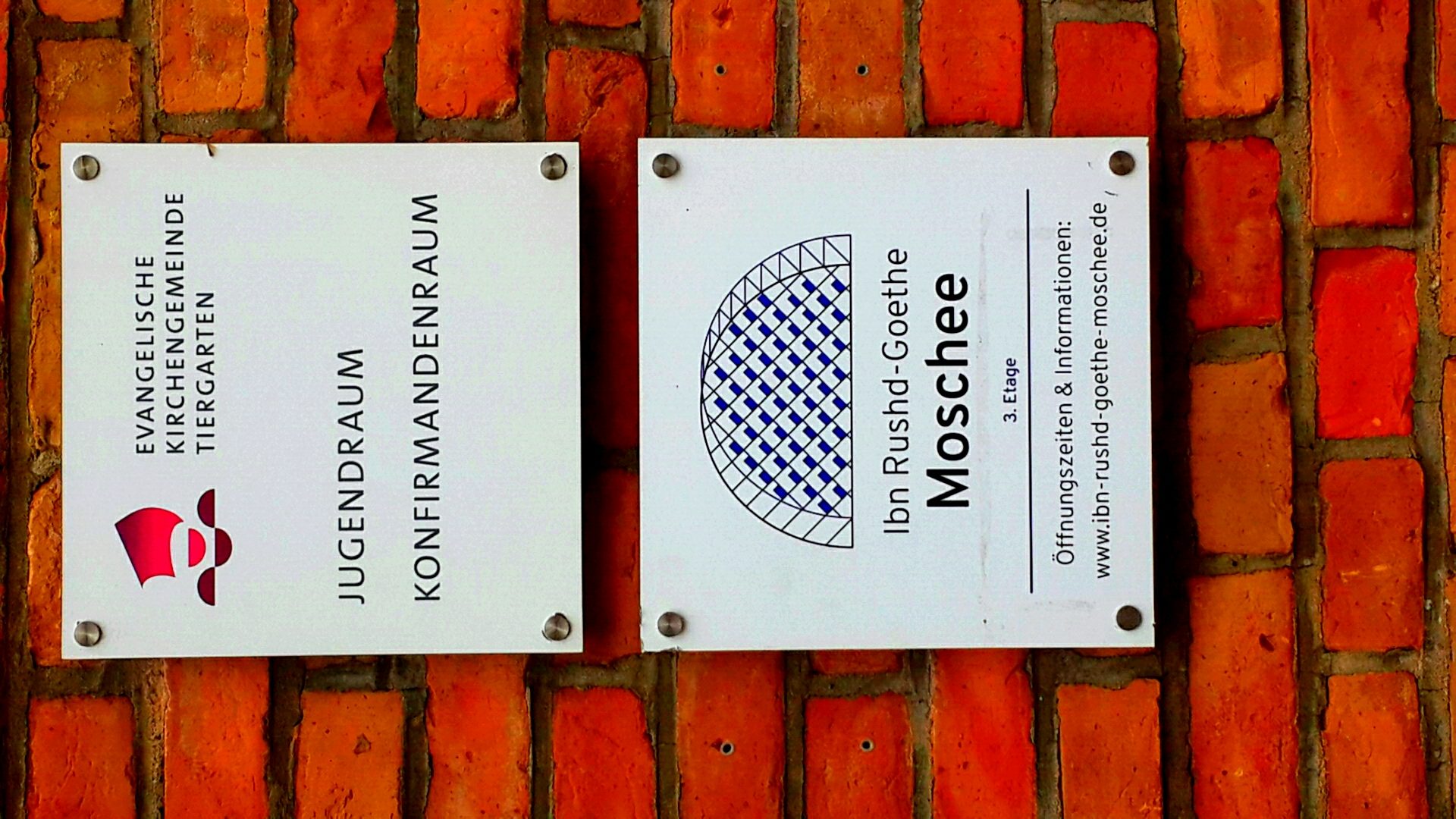 As a political scientist with a background in cultural studies, I happened to experience the so-called ‘culture shock’ in a familiar setting for a Muslim – a mosque, yet in different context and conditions. Having been in Berlin for a short stay, the Ibn Rushd-Goethe Moschee has been attractive enough to arouse my curiosity to know more on how the community around this mosquerepresent their religious identity and practice their faith. The mosque is often stamped as ‘liberal’ or ‘the first of its kind in the world.’

Since opening its doors two years ago, it has triggered a stormy controversy and fierce opposition, coming especially from the Turkish Diyanet and the Egyptian al-Azhar, for allowing women and men as well as the LGBT community to pray  together side by side. In the mosque’s official website, we can read:

“…an Islam where women and men are equal in value and have equal rights. Both men and women are allowed to call to prayer, lead the prayer and preach. Our doors are also open to all LGBT*IQ Muslims to offer them a place of spiritual security. In our mosque, all the faiths of Islam are welcome, such as Sunnis, Shiites, Sufis, and Alevis”. The mosque is actually no more than a spacious room and it has no minaret. It is situated on the third floor of a building that belongs to a Protestant church in Berlin. The picture of a mosque accommodated inside a church is uncommon nowadays and remains an unusual exception both in the Muslim world and in the West. While some regard it as an emblematic symbol of interfaith coexistence and tolerance, a lively embodiment of “progressive, modern Islam,” others, from both mainstream and ‘radical’-minded current, tend to consider it as a sort of “profanation” and “deviation” from the mainstream/orthodox Islamic tradition.

“The Mosque is located in the Moabit district; a neighborhood in Berlin populated with a vibrant mixture of immigrants, including a considerable number of Muslims. To avoid any unexpected inconvenience, I have had to ask permission, beforehand, to attend the Friday prayer.”

The Mosque is located in the Moabit district; a neighborhood in Berlin populated with a vibrant mixture of immigrants, including a considerable number of Muslims. To avoid any unexpected inconvenience, I have had to ask permission, beforehand, to attend the Friday prayer. A Turkish bearded young man, accompanied with an unveiled woman, received me with a big smile. They quickly understood my curiosity and welcomed my concern to explore what is going on there, and handed me the program of the activities taking place in the mosque over the weekend.

The Friday prayer, in mid-December, starts at 2 pm and lasts one hour. It consist of three key moments: the call for prayer, the sermon, and the midday prayer. Nearly twenty-five men and women of different ages (estimated 25-55 years old) were gathered in the mosque. Some of the attendees were there only to observe; they were not seen taking part in the congregational prayer.

The prayer initiated with the call for prayer (adhan). A woman in her forties, wearing a headscarf and a skinny fit trouser, stood at the center of the mosque to pronounce the formal Islamic call for prayer. Her voice was mellow and beautifully pitched. It sounded lovely and exquisite, making the rhythm of the adhan seem like a piece of a psalmody monologue. It seemed like this breathed a beautiful, sparklingly peaceful spirituality into the shiny, white-carpeted place. While reciting the call, her body was moving in harmony with the intonation, leaning right and left with a leg sets in normal position and another inclined on the fingers only. The adhan is recited once, while is conventionally repeated two or even three times – especially in some Muslim countries following the Maliki school of jurisprudence such as in Morocco and Tunisia. When the “muazzina” reached the middle, “come to prayer” (hayya ‘ala salah), she began to move forward slowly, making a smile on her face as if she realized that a camera and the audience had been drawn to her. It is worth mentioning that in Islamic doctrine woman is not allowed to lead the prayer or any other religious task related to Imama (religious leadership) including calling the adhan or delivering the Friday sermon – although have started to emerge. For example, Morocco’s High Council of Religious Scholars issued a fatwa in 2006 that clearly turns down the idea of a “female Imam.” The fatwa indicates that the Islamic jurisprudence, including the majority opinion in the Maliki school, unanimously forbids the women to lead the prayer because this implies a consequent modification in the form of the prayer and even displaces women’s position (conventionally standing behind men) in the scene of congregational prayer. The fatwa added, “whereas women’s prayer should be silent, muteness is considered a fault in men’s prayer.”

After the adhan, the Imam/ khatib (the one who delivers the Friday sermon-khutbah) had urged the audience to perform two rak’at (unit of ritual prayer) before he initiated the Friday sermon. There is no mihrab niche identifying the qibla’s direction nor a minbar (pulpit) on which the khatib stands to preach. A simple lectern replaces the mihrab. Ludovic–Mohamed Zahed, an Algerian-born and a charismatic face known to be the founder of the group ‘Homosexual Muslims of France,’delivered the sermon that Friday.

He started the khutba by the praise and thanks to Allah Almighty, uttering almost the same common terms that form the classical structure of the Friday sermon anywhere else. The sermon’s topic centered on the meaning of the prayer of Istikhaarah (i.e. a prayer recited by Muslims in need of guidance of God on an issue in their life) and its significance and conditions. It also defined the conditions and when it is desirable to resort to this prayer. The sermon was delivered in English except for the Quranic verses, pronounced in Arabic, the original language of revelation. The sermon lasted about twenty minutes. It concluded without the common invocations and supplications that close the classical Friday sermons.

“The interlocutors diligently strived to find arguments in favor of homosexuality from the sacred texts, based mostly on a particular reading of the story of Prophet Lot in the Quran…”

Once the sermon is over, the same woman stands to recite the Iqamah, the second call to prayer, with the same rhythm and moves as she did while calling the adhan. Then, again, worshipers perform two rak’at individually, which is not common in the regular Friday prayer in Sunni Islam, before the imam leads the midday prayer (dhuhr) in congregation.

Once the ritual prayers are completed, the Imam told the audience that the mosque would host a series of seminars on ‘Homosexuality in Islam.’ One of these talks started immediately after the prayer. It discussed how Islam approached homosexuality. The interlocutors diligently strived to find arguments in favor of homosexuality from the sacred texts, based mostly on a particular reading of the story of Prophet Lot in the Quran frequently used by most other Muslims to preach against homosexuality. An LGBT activist from Iraq presented his/her practical experiences on the question, summarizing the efforts they made with local Imams to raise awareness of their cause.

I left the mosque with my curiosity aroused further than before. The visit left me with many unanswered questions regarding the dynamic transformations operating within the Muslim community in Europe; transformations that suggest bold ‘radical’ interpretations of Islam in terms of the patterns of religiosity and the gendering of the religious authority that may pave the way towards a ‘feminist Islam.’ Most importantly, how would this new embryonic liberal current conform or challenge the emerging reformist voices advocating an inclusive, multicultural Islam in tandem with an increasingly globalized context?