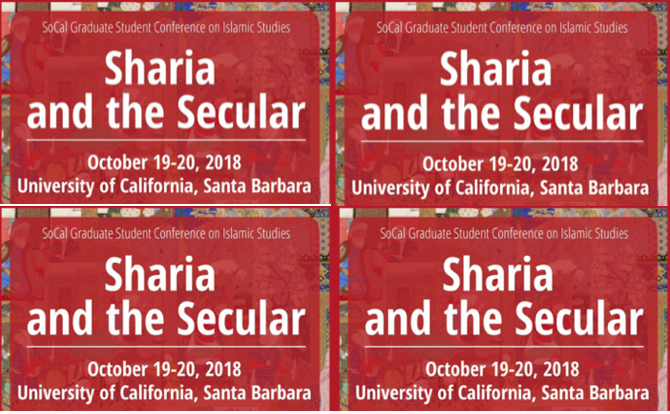 With the launch of its doctoral program in Religion/Global Islam in the fall of 2015, the University of Southern California (USC) and its School of Religion added its name to a list of several other major universities in the region that offer graduate programs in Islamic Studies, including the University of California at Santa Barbara (UCSB), the University of California at Los Angeles (UCLA), and others. Since both of our arrivals into the doctoral program at USC my colleague Omar Qureshi and I have been in conversation with our academic advisor Professor Sherman Jackson on some of the ways in which we could promote the scholarly activities of our department. We came up with many ideas, one of which was to organize annual conferences, through which we would bring together our peers and colleagues from other institutions to discuss topics that related to the broader field of Islamic Studies. As a new program, we thought it would be a good idea to collaborate with other regional institutions in Southern California to undertake this project.

Over the course of 2016-2018 academic years, Professor Jackson, Omar, and I visited UCSB and met with Professor Ahmad Ahmad and some of the graduate students there in the Department of Religious Studies, including Esra Tunc and Brendan Newlon. This was followed by a return visit by Professor Ahmad and the UCSB graduate students to USC. After several discussions, we agreed to form the “SoCal Islamic Studies Graduate Student Consortium.” This initiative, we envisioned, would draw on the academic reputation and scholarly expertise of several Southern California institutions, faculty members, and graduate students, to promote rigorous scholarly exchange. The Consortium’s inaugural project was its graduate student conference under the theme “Sharia and the Secular,” which was held on October 19-20, 2018, at UCSB. Putting together a successful conference is always easier said than done. It takes a lot of time, brainstorming, and resources to come up with an interesting theme, to create and distribute a call for papers, to read through applications and abstracts, to create panels and place similar themed papers together, to acquire funding, to coordinate with panelists and participants, to arrange for the venue, food, and other logistics, to many other details. However, a conference is only successful to the extent of the dedication of its organizers, supporters, and attendees. I would be remiss not to mention the commitment of my good friends and co-organizers: Esra, Brendan, and Omar. They spent countless hours, despite their scholarly and familial responsibilities, planning every detail. A conference requires financial support, and, for this, I acknowledge and thank the generous assistance of the Center for Middle East Studies at UCSB, the Department of History at UCSB, the Walter H. Capps Center for the Study of Ethics, Religion, and Public Life at UCSB, Professor Ahmad Atif Ahmad (in charge of UCSB Religious Graduate Programming), the Department of Religious Studies at UCSB, the School of Religion at USC, and the Center for Islamic Thought, Culture, and Practice at USC. Despite being a graduate student conference, we were greatly assisted by the experience, support, and assistance of Professors Ahmad Ahmad (UCSB), Kathleen Moore (UCSB), and Sherman Jackson (USC); they have been wonderful supporters and mentors.

Why “Sharia and the Secular”?

So, why did we choose “Sharia and the Secular” for the inaugural conference theme? For one, several faculty members and students at UCSB and USC have produced scholarly work and hold research interests in Islamic law and its relation to society, the state, and modernity.

“However, inspiration for the theme came mainly from the work of Professor Sherman Jackson.”

However, inspiration for the theme came mainly from the work of Professor Sherman Jackson. During my first year in the PhD program at USC in 2015-2016, I greatly benefitted from Professor Jackson’s scholarly discussions on Islamic law. In particular, I spent many fruitful hours listening to him discuss the role of Islamic law in the modern world and especially the idea of the limits of sharia. In 2016, Professors Ahmad and Moore hosted a two-day roundtable at UCSB on teaching Islamic law, where Professor Jackson introduced his idea of the “Islamic secular.” This was followed by the publication of his 2017 article in the American Journal of Islamic Social Sciences entitled “The Islamic Secular.” Throughout this entire process, I, along with many other scholars and students, came to appreciate the scholarly genius of Professor Jackson’s concept. It was (and continues to be) especially interesting to see the reactions from other academics to this concept, ranging from initial frustration and confusion to absolute excitement and engagement. Thus, the relationship between “sharia” and “secularism,” “secularity,” and “the secular” more broadly seemed to be quite fitting for an inaugural conference being organized by graduate students at UCSB and USC. The “Sharia and the Secular” conference continued for two days and included several panels and lectures. On Friday, October 19, 2018, the conference opened with Professor Kathleen Moore’s presentation on “Sharia Revoiced,” a project that she and other scholars have been working on that surveys the ways in which Muslim communities in California have come to understand Islamic law. Following Professor Moore’s presentation, two panels on “Problems and Debates in the Conceptualization of Sharia” included papers by Anas Mahafzah (UCLA), Mohammed Sadegh Ansari (Columbia), Khalil Andani (Harvard), Cameron Zargar (UCLA), and me, with responses by Professor Jawad Qureshi (Zaytuna) and Professor Sherman Jackson (USC). The first day ended with a keynote address by Professor Sherman Jackson, in which he revisited and expanded upon his idea of the “Islamic secular.”

On Saturday, October 20, 2018, the conference opened with a panel on “Configuration of Sharia in the Early Modern and Modern State,” with papers by Rushain Abbasi (Harvard) and Amy Fallas (UCSB) and a response by Professor Juan Campo (UCSB). This was followed by a panel on “Judicial Procedure in the Modern State” with papers by Wasim Shiliwala (Princeton), Brian Wright (McGill), Mohamed Medhat (American University, Cairo), and a response by Professor Ahmad Ahmad (UCSB). After lunch, Professor Liyakat Takim gave a keynote address on “Mintaqa al-Faragh and the Shi‘i Secular.” This was followed by the final panel of the conference on “The Application of Sharia in Contemporary Times,” with papers by Kevin Dupont (Tufts), Sean Widlake (Northeastern), Brendan Newlon (Center for Creative Leadership), Sadique PK (EFL, Hyderabad), and a response by Professor Kathleen Moore (UCSB). Finally, Professor Elliott Bazzano (Le Moyne) delivered a presentation on “Islamic Studies and the Job Market: Reflections on Strategy, Surrender, and Mental Health.” The conference ended with Professor Ahmad Ahmad’s closing remarks.

Responses to the conference were mostly very positive. Faculty, students, and attendees enjoyed the challenging papers and discussions, the intellectually stimulating lectures, and the overall aura of the event. According to one attendee, “[T]his is the destination for students interested in Islamic thought and its historical and contemporary engagement with other discourses and traditions of thought across the world.” Another attendee commented, “[T]his was a very successful and highly educational conference. I would recommend it with no reservations.”

Organizing and executing a successful conference is not an easy task. Below, I suggest some important tips for (graduate student) conference planning, in the process highlighting some of the opportunities and challenges this sort of planning involves. Of course, the following is a list of general tips and is not meant to be exhaustive: