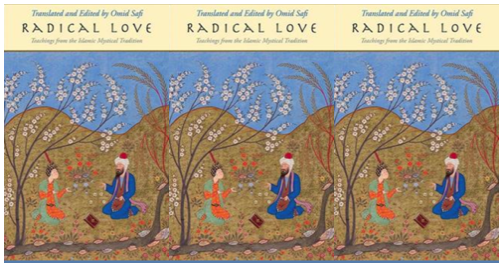 Omid Safi’s Radical Love: Teachings from the Islamic Mystical Tradition is an anthology of poems and aphorisms focusing mostly on Sufi poetry, as well as the Qur’an and Hadith. As a collection of translations, supported by an introduction, Radical Love is not meant to be an analytical work, at least not in the historical or literary sense. It is, rather, a gateway—through literature—to salient concepts in classical Islamic writings on spiritual love. As such, its successes must be measured against other such translations. Contemporary English collections of Arabic and Persian Sufi poetry have aimed for the marriage of poetic resonance and source fidelity, and these include those of Th. Emil Homerin, Michael Sells, Sholeh Wolpé, and Jawid Mojaddedi, among others. Safi’s anthology reaches out to a wide audience—the audience of Coleman Barks and Daniel Ladinsky—while exercising less license than either Barks or Ladinsky.

The introduction includes brief biographies of the major figures quoted throughout that focus on each writer’s distinctive contributions to the discourse of love. Safi also offers theological and historical reflections on love in Islam, summaries of cosmologies of love that one finds in the thought of poets such as Rūmī (d. 1273) and Fakhr al-Dīn ʿIrāqī (d. 1289). Safi’s translations, however, are the highlight of the anthology. There are rare occasions when Safi includes translations by others, but the bulk of the poems and passages are original translations, which aim not for equivalence at word level, but rather to “convey something of the fire and spirit of the original” (Safi xxxvii).

Safi’s marked success in achieving this balance between fidelity and poetic cadence can be seen by considering a poem from his anthology. Here I offer, for the sake of comparison, a straightforward, word-for-word translation of one bayt, or double-line, from a ghazal of Ḥāfiẓ:

I’ve seen (nadīdam) nothing more pleasant than the sound of words of love,

a memento [of God’s love in creation] that remains in this revolving dome.[1]

Safi’s translation makes careful but subtle changes to what might be called a “literal” translation, clarifying thereby the meaning of Ḥāfiẓ’s verse to those who might not know that, for example, “this revolving dome” refers to the sky. Moreover, his choice of words brings the passage to life:

than the melody of love

The epistrophic pairing in the phrase “lovelier / than the melody of love” matches the theme of the bayt, the theme of sensory beauty, to its sound. Safi conveys a sense of finality—the finality of humans bound to this world—through two trochaic feet followed by a conclusive, stressed word: “whirling azure dome.” In these ways, the translation of this bayt of poetry simultaneously stimulates the reader’s dual senses of appreciation for beautiful language and eagerness to know more. Beyond that, Safi’s contribution is his careful selection of this one bayt from a ten-bayt poem. Safi directs the reader’s attention, orienting the reader to one particular, meaningful idea. Radical Love’s endearing quality lies, at least in part, in Safi’s less-is-more approach to introducing Islam’s poetics of love.

Safi’s selective approach appears in his translation of a series of four consecutive bayts from ʿAṭṭār’s (d. 1221) long narrative poem, Manṭiq al-Ṭayr (Speech of the Birds). ʿAṭṭār’s poem is 4,724 bayts or double-lines (comparable to 9,448 lines of verse in heroic couplets) in Muḥammad-Riḍā Shafīʿī-Kadkanī’s edition, though it is divided into segments. Safi chooses lines that will communicate, in a manner both succinct and endearing, a major theme in Sufism, namely God’s absolute omnipresence as perceived by the awakened soul. Here, again, I translate literally, in order to highlight Safi’s manner of combining accessibility with both precision and rhetorical skill:

The Throne is on water and the cosmos sits on air.

Go beyond water and air: it is all God.

The Throne and the cosmos are nothing more than a talisman,

Look closely [to see] that this world and the next are He.

There is nothing but Him, and if there is, that’s Him too.

It is all one essence but with different qualifiers.

It is all one word but with various expressions.

A man must be intimately familiar with his king

to be able to recognize him through one hundred different garments.[2]

Safi’s rendition of these lines presents them as a contemporary free verse poem, drawing thereby the reader’s attention to each line’s contents:

The throne is on the water

The whole world is up in the air

The throne and the world

are nothing other than talismans

there is nothing but names.

There is nothing other than Him.

And if there was,

It’s all one Essence

defined through His attributes

To be a man of God

you have to know your King

even if you see your King

As can be seen here, Safi’s translation achieves approachability not by veering from the source text, nor by adding contemporary references, but through brevity and the careful selection of passages and vocabulary. Able teachers often take great pains not to introduce an overabundance of terms, especially to students completely unfamiliar with a topic and hence intimidated by it. This is a practice supported by Cognitive Load Theory, a pedagogical outlook that supports stripping problems down to their essential components to increase student engagement. Safi’s approach to Islamic love poetry acknowledges ways in which minimizing content, selectively presenting what needs to be said, can maximize focus. The challenge in writing an anthology of medieval Sufi love poetry and Islamic maxims for general readers is that sometimes even the smallest degree of reference to that which interests the specialist gives the text an air of inaccessibility. Safi’s collection readily embraces accessibility: his intended audience—general interest readers, spiritual seekers, lovers of poetry, and readers of Rūmī—can grasp the collection of poems and enjoy them. Moreover, the reader encounters throughout the volume a sense of timeliness to Safi’s embrace of what might be called “the spiritual.” What we are reading is not a historical or literary-critical interpretation of Sufi poetry, but rather something, in some ways, more daring: An introduction to Safi’s vision of the living ethical impulses behind such poetry. In order to accomplish that, Safi translates in a way that does not only go beyond lexical deciphering, and the semantic sense of the source text, but rather conveys to the English-language reader an aesthetic sense as well. Capturing nuances in their Persian and Arabic originals, while still clear and earnest, Safi’s translations are well-suited for those reading for pleasure, as well as for instructors of classes on Islam, world religions, comparative mysticism, and comparative literature.