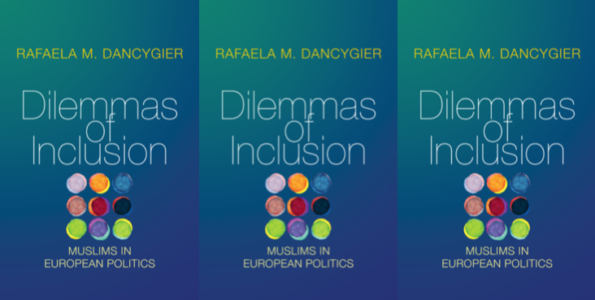 This book review by Brian Van Wyck was first presented at the 2nd Annual Graduate Student Book Review Colloquium on Islamic and Middle Eastern Studies organized by the Ali Vural Ak Center for Global Islamic Studies at George Mason University & The Maydan. This version is a slightly revised version of the paper delivered at the Colloquium.

Since the early 1980s, the presence of Islam in Western Europe has attracted considerable popular and scholarly attention. In earlier periods, postcolonial and labor migrants from Muslim-majority countries were seen to be different from the majority society primarily in national, class, or ethno-racial terms. It was only in the 1980s that these same migrant communities were increasingly understood primarily as Muslims. This united – and arguably flattened – scholarly and popular discourse across Western European contexts. It suggested that discussions surrounding the integration of Turks in Germany or Pakistanis in the United Kingdom had an important common denominator. If being Muslim was the most salient attribute of both groups, this united what had previously been seen as dissimilar cases and contexts. Growing interest in Islam in Western Europe inspired a wave of publications on the compatibility of Islam and imagined European values of pluralism, tolerance, and secularism. Scholars like Bassam Tibi, Tariq Ramadan, and Jørgen Nielsendebated the necessity and likelihood of adapting Islamic beliefs and practices to Western European conditions, often informed by the assumption that integrating Islam would necessarily lead to greater social, political, and economic integration of migrants from Muslim-majority countries. In recent years, a nascent trend can be observed which has effectively reversed this focus. Increasingly, academic work on Islam in Western Europe such as that of Jonathan Laurenceand Christian Joppke, among others, has been interested in the effects of Islam on European states and societies. The question for these scholars is not so much the effects Europe has or should have on Islam, but rather why and how European politics and institutions have changed in response to the Islamic presence.

With her carefully argued and compellingly written study Dilemmas of Inclusion, Rafaela Dancygier, associate professor of Politics and Public Affairs at Princeton, brings new insights and rich empirical depth to these questions.

Dancygier sheds light on the dynamics behind the incorporation, or lack thereof, of Muslim candidates in local elections in European countries: the “inclusion dilemma” of her title. Her conclusion, and the main argument of Dilemmas of Inclusion, is that, irrespective of ideology or lofty rhetoric about inclusion and multiculturalism, it is “hard-nosed electoral calculations” (11) that drive the decision to run Muslim candidates and which candidates are selected.

Parties weigh potential electoral gains from targeting the Muslim community in an electoral district against the risk of alienating two groups. These are either “ethnocentric” voters, who might balk at a Muslim candidate, or “cosmopolitan” voters, whose support is risked if a candidate’s views on social issues are more conservative. If anticipated vote losses from running a Muslim candidate outweigh possible gains from mobilizing a high share of the Muslim vote, Muslim candidates are excluded from elections. When the Muslim electorate is small but potentially significant, parties opt for symbolic inclusion, selecting candidates with views on social issues closer to the average party voter than the majority of Muslims in the district. Finally, if Muslims constitute a substantial voting bloc, parties practice “vote-based inclusion” and run Muslim candidates, even when this means alienating core supporters.

To arrive at these conclusions, Dancygier analyzes election data from 300 municipalities and background information on more than 80,000 candidates across four countries: Austria, Germany, Belgium, and Britain. These four countries were selected because of their roughly comparably-sized Muslim populations – in proportional terms – and the fact that two (Austria and Germany) are restrictive in both their citizenship regime and their local electoral laws and two (Belgium and Britain) are more permissive on both counts. In Austria and Germany, the electoral impact of Muslim voters is small, resulting in more exclusion or symbolic inclusion. In Britain and Belgium, where the potential payoff is greater, parties run more Muslim candidates in local elections.

After laying out the broad strokes of her argument and methodology in two introductory chapters, Dancygier turns in Chapter 3 to the geography of Muslim migration. Due to the dynamics of chain migration and discrimination in the housing market, Muslim voters are disproportionately concentrated in urban neighborhoods. This is where the inclusion dilemma is the starkest. Here the potential gains of mobilizing Muslim voters are great but competition for economic resources and the prevalence of ethnocentrist views among non-Muslim working-class voters also living in these areas heightens the risk of alienating a core constituency for the left. In Chapter 4, Dancygier mines the manifestos of parties across the ideological spectrum, comparing statements of values related to Islam to the representation of Muslim candidates. She finds that though parties of the left are more likely to profess inclusiveness and recruit Muslim candidates than parties on the right, parties of any stripe almost never run Muslim candidates without electoral incentives to do so.

Chapter 5 puts aside the cross-country comparisons to closely examine candidate selection across thousands of ward elections in Britain. Once parties are incentivized to cross the threshold from symbolic to vote-based inclusion, Dancygier finds that they become reliant on the lure of “easy” bloc votes delivered by Muslim candidates. This relegates partisan alignments to an afterthought in electoral campaigns. In doing so, British parties – Labour above all – have neglected class-based coalitions and tied their fate to less reliable personal politics. This loses seats Dancygier argues Labour would have won had it emphasized class-based appeals to working-class Muslims. Intriguingly, Dancygier finds that this strategy of candidate-centered politics has weakened the generally strong link between income and identification with Labour among Muslims in urban areas. In the final empirical chapter, Dancygier takes up another consequence arising from the inclusion dilemma: the striking decline in gender parity when parties pursue vote-based inclusion. In Austria and Germany, where symbolic inclusion is most prevalent, Muslim women are more likely than non-Muslim women to be put forward for election. However, in Britain and even in Belgium, where election laws ensure equal representation of men and women on party lists, parties favor Muslim men as candidates by placing them in more attractive list positions, resulting in more elected Muslim men than women. These choices are made on the assumption that men are better connected in religious and kinship networks and can attract more votes from the Muslim bloc than can women.

“…parties favor Muslim men as candidates by placing them in more attractive list positions, resulting in more elected Muslim men than women. These choices are made on the assumption that men are better connected in religious and kinship networks and can attract more votes from the Muslim bloc than can women.”

The implications of Dancygier’s book are manifold. For one, she demonstrates clearly that ideology plays a consistent second fiddle to electoral calculations, even when it comes to supposedly sacrosanct European values like gender equality. As she suggests in her concluding chapter, this is short-sighted, as the lure of easy votes in the short-term and in local elections contributes to the weakening of the cohesion of broad-based parties at the national level. Given the declining influence of traditional mobilizing factors like trade unions in getting out the vote, the attractiveness of this strategy may only grow.

The balance of scope and depth in Dancygier’s study is impressive and it may seem churlish to quibble with her case selection. However, the frequency of references to France throughout the book raises the question of how the country with Western Europe’s largest Muslim population would fit into Dancygier’s model, irrespective of its confounding combination of a permissive citizenship regime with restrictive electoral laws. On the whole, Dancygier is more concerned with outcomes than with process. Nonetheless, it would also be valuable to complement her study with an account of how decisions within parties are made and to what extent the inclusion dilemma is a conscious or unconscious factor in candidate selection.

Throughout Dilemmas of Inclusion, Dancygier demonstrates how parties choose candidates who can most effectively marshal votes in their communities by playing on traditional and religious networks. This weakens party cohesion without actually securing the “Muslim vote” permanently. As Dancygier’s argument goes, the inclination to understand voters primarily as Muslims rather than in terms of class has had deleterious effects on European politics. In that sense, Dilemmas of Inclusionmakes a surprising case for a return to earlier understandings of migration in Western Europe before the turn to a focus on Islam in the 1980s, a turn Dancygier believes has wrought considerable damage on contemporary electoral politics.