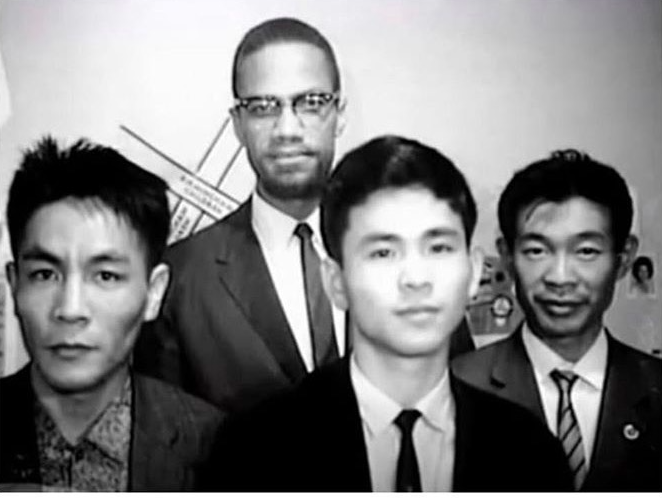 And with racism now plaguing in America like an incurable cancer all thinking Americans should be more respective to Islam as an already proven solution to the race problem.

The political ascendency of Donald J. Trump represents a stunning reversal in American race politics. Whereas during the Barack Obama presidency, some dared to postulate the notion of a “post-racial” America, little could they have imagined the blowback that awaited the country’s first biracial president. Although proponents of post-racial philosophy saw Obama’s election as proof positive of racism’s demise, the 2016 presidential election ushered in an individual who flipped the proverbial script: Trump talked of Mexicans as rapists, instituted a travel ban aimed at Middle Eastern Muslims, and has fomented deep divisions against immigrants and Black protesters in the NFL, not to mention the less-than-enthusiastic response to the Hurricane Maria disaster in Puerto Rico. Coupled with unabashed sympathy toward Nazism and white supremacy, it is an understatement to say that Trump’s election represents political backlash – as true as this may be, more is at stake. Today, emboldened acts of racism and xenophobia are the order of the day, which have single-handedly put the notion of post-racial to rest.

This radical shift in race dynamics makes Malcolm X’s words more relevant now than perhaps ever. As his statement suggests, Malcolm believed that Islam had answers to a problem that plagued and consumed his very existence. From his early childhood, the problem would manifest savagely, with his family being persecuted by ‘Whites’ and his father likely killed by Klansmen, and his mother being stripped of her children by the state, and later committed to a state mental institution. From Malcolm’s view, ‘Whites’ were the basis of his woes, including his incarceration, where he would become attracted to the Nation of Islam and the notion of black divinity.

It may seem obvious that the Nation of Islam’s race-war-rhetoric spoke to Malcolm X’s lived experiences of being black in America. As a counter-discourse to white oppression, the Nation’s ideas and language gave him tools to fight racism at a time when there were few. After his release from prison, his next incarnation was as a critical mouthpiece for this organization, exhausting all energies on exposing not only the White Man’s racism, but also how Blacks were racist against themselves. Over time he would disavow the White Devil-Black God theology that he preached for many years.

The change reflected the influence of Sunni Islam in his life, which taught that piety, not race or color, was the true mark of superiority. Although the Nation articulated a vision of religion that put him on a path to separation, his second incarnation as a Muslim would lead him to embrace all Muslims, regardless of skin color.

Malcolm X’s story is a lesson in how religion can exert opposing forces in society. In his case, as a prisoner, doctrine was a force that afforded him a means to separate himself from Whites. Later, the influence of Sunni thinking proved a reconciliatory force in his life. Whereas his ministry under the Nation was racially incendiary and extremist, after gravitating toward Sunni Islam, he began to reimagine Islam’s role, not as entrenching racial divides, but as a way to unite and transcend race itself.

The idea that Islamic ideology positively impacts American race-relations may strike some as counter-intuitive. However, a cursory glance at Islamic teachings reveals deep commitments to principles that challenge racist ideology. For converts, the movement away from the Nation of Islam to Sunni Islam often is mirrored by movement away from a racial theology to a tradition that eschews racial superiority.

Teachings in Islam overtly reject division and hierarchy based on race or skin color. Passages in the Quran and Hadith offer critical insights into Islamic teachings in this area. From the very beginning, Islam was conceived on the general notion that humans are equal, as one notable passage proclaims, “O people, We have created you male and female and made you into nations and tribes that you may know one another. Verily, the most noble of you to Allah is the most righteous of you. Verily, Allah is knowing and aware” (Surat al-Hujurat 49:13). “Among His signs is the creation of the heavens and the earth and the diversity of your languages and your colors. Verily, in that are signs for people with knowledge (Surat al-Rum 30:22).” From this perspective, different skin colors and languages are a sign of creative power, all of which are divine in Allah’s creation as described in Hadith: “Verily, Allah Almighty created Adam from a handful which He took from the earth, so the children of Adam come in accordance with the earth. Some come with red skin, white skin, or black skin, and whatever is in between: thin, thick, dirty, and clean.” (Sunan al-Tirmidhī 2955).

From the tradition’s perspective, the Prophet Muhammad is portrayed as one who aimed to break down barriers that divided people into tribe, clan, and caste. He characterized such affiliations as subservient to one’s identity as a Muslim: “O people, your Lord is one and your father Adam is one. There is no favor of an Arab over a foreigner, nor a foreigner over an Arab, and neither white skin over black skin, nor black skin over white skin, except by righteousness. Have I not delivered the message?” (Musnad Aḥmad 22978)

For African-Americans in particular, Islamic history shows this vision play out in the Prophet Muhammad’s selection of Bilal ibn Rabah as the tradition’s first muezzin, or leader in the call to prayer. Bilal was one of the Prophet’s closest companions, born of African descent and born into slavery, his personal selection by the Prophet offered absolute proof that one is to be judged by piety as a Muslim, not by one’s skin color or birth status. Bilal’s influence on Islamic tradition is uncontested, and he is particularly venerated by African muezzins. In his book, Christianity, Islam and the Negro Race, Edward Wilmot Blyden emphasized the point in 1874 when he wrote, “even Alexander the Great is in Asia an unknown personage by the side of this honoured Negro.” These examples suggest that piety is more critical for Muslims than skin color. Such foundational statements about human equality are likely a factor in the global spread of Islam and its growing popularity. In America, prisons have played an important role in the spread of Islam; like Malcolm X, many prisoners first come into contact with Islamic ideas while incarcerated, some of whom will walk the same path as he to racial redemption.

Prisons occupy a unique place in the annals of American Islam and history. In pop culture, films, TV, books, and music, the prisoner-turned-Muslim is a classical American story. Much of the influence of Islam in prison is due to outreach efforts of African-American organizations. The early groups include the Nation of Islam and Moorish Science Temple, which have concentrated proselytizing efforts behind bars, as has the later Five Percenter movement. These and other African American groups have been historically labeled “Black Muslims,” and they are a powerful force for tapping into the black mind. Whereas these movements may stray from ancient Islamic beliefs and practices, their scathing critique and commentary on American racism remain an ongoing attraction for generations of prisoners.

Today, Islam holds even greater prominence in prison, which coincides with the mass incarceration of African Americans and Latinos inside American jails and prisons. In the last few decades, the prison population has reached world-leading peaks, and simultaneously, has provided a massive captive audience for the message of Islam. Consequently, correctional institutions are hubs of religious activity and prisoners are increasingly interested in Islam, as one Pew survey of chaplains described, the majority of prisoners who seek a new faith turn to Islam.

Prisoners all over the country are taking their first step on a path that ultimately leads to a more racially moderate worldview. Offenders from all persuasions: adults and juveniles, gang members and ex-members, violent and nonviolent are being introduced to interpretations of Islam that speak to their racial experiences. This is the message Malcolm X heard when he needed it most, and it sent him on a journey that made him revise some of his mostly deeply held racial convictions. His narrative has left behind a blueprint for future generations of converts to follow. Like him, many Blacks who have experienced self-loathing and self-hatred have been allured by the notion of Black divinity. Ultimately, race-based theology is rejected as is the blanket condemnation of Whites or any other racial group.

Whereas American culture is replete with examples of how religion creates racial divides, there is also something to say about how Islamic influences help to mend them. This point is neither hyperbolic nor hypothetical, but a phenomenon that has been bolstered by the post-1960s influx of immigrants from Muslim countries, which has brought large numbers of Muslims from South Asian, Middle Eastern, and African countries. Today, the majority of Muslims in the United States is composed largely of individuals from these countries, which collectively now outnumber African American Muslims. Even among African Americans, Sunni Islam is the most widely practiced denomination, which means that the predominant Islamic norm in America rejects racial superiority.

Malcolm X’s life exemplifies a transition from radical segregationist to being willing to work with people from all stripes. Whereas during his years in the Nation, his separatist views helped garner the title “most dangerous man in America,” he would later revise some of his core beliefs which helped him to recognize Islam as a solution to American racism. As his story tells, he cleared a path for himself out of the racist trappings that once was the only thing that made sense to him. Like him, many today continue to abandon the notion that race is central to the Muslim faith. Accordingly, Islamic ideas continue to have a hand in tempering racial animosity at the individual, group, and institutional levels.

Of course, this essay is not intended to whitewash race relations in America and pretend that racism among Muslims does not exist. Clearly there is lots to be desired about race relations within Muslim communities in the United States, which remain relatively stratified by race and class. The point is to highlight how Islamic teachings on race counteract racial extremism.

The essay would also be remiss not to recognize that among converts, both African American and Latino, Islam is particularly attractive due to the cultural legacies of Islam in Africa and Spain. For such converts, these cultural ties make conversion less of apostasy and more the reclaiming of one’s cultural heritage. Islam connects these groups to a spiritual history that acts as gateway to greater self-esteem and cultural pride.

Just as religion can foment racial extremism, religion can also catalyze new beliefs about race. Malcolm X’s autobiography illustrates the point after he returned from Mecca he sought to continue advancing African-American rights, but was prepared to work with people of all races. In that same work, he lamented that when he was once asked by a white college student what she could do to help his cause, his reply was “nothing.” Wishing he had that one to do over, the point was simple: his racial consciousness had evolved from that episode, and under his new thinking he would have given a much different answer. This change in consciousness exemplifies how Islamic ideas positively impact American culture.