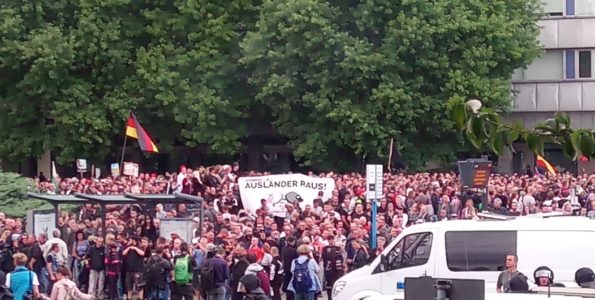 Post-war Germany is a success story in many ways. The Americans amongst others tried hard – with the Marshall Plan – not to let Germany become a Nazi regime again. The US thus introduced a program of de-Nazification, re-education and later re-orientation in order to build a more democratic society that would not again fall in the hands of authoritarian regimes. Today, Germany is a leading nation in the European Union. And it is widely considered that Germany has successfully implemented de-Nazification.

“When the right-wing populist Alternative for Germany (AfD) – established only in 2013 –  became third largest party in the national parliamentary elections in 2017 in a big surprise, it signaled that organized racist politics would be poised to appear again in Germany.”

More recently, however,  the trial against the long-time right-wing extremist group National Socialist Underground, where Beate Zschäpe was sentenced to life for murders, reminded us that Nazism is still alive. And it especially raised questions about the involvement  and ties of Germany’s security agencies with these underground groups. Especially the rise of the street movement Pegida – Patriotic Europeans Against the Islamisation of the Occident – and the fact that it was able to gather more than 10,000 protesters marching at its peak, clearly served a reminder to the mindful observers that political movements on the far-right that openly embrace racist programs are possibly on the rise again.

When the right-wing populist Alternative for Germany (AfD) – established only in 2013 –  became third largest party in the national parliamentary elections in 2017 in a big surprise, it signaled that organized racist politics would be poised to appear again in Germany. Since the last elections, the AfD is even leading as the second largest party in polls. This is significant, because never in post-1945 German history has a right-wing party made it so far . Let’s add another, comparative layer to this: Germans often looked down on their neighbour,  Austria, where Adolf Hitler was born, and where de-Nazification programs and especially democracy education was much less systematically implemented. Also, right-wing parties were accepted from early on in Austria and hence, anti-Semitism could be uttered very openly. Not so in Germany, where supporting Nazism and blatant racism was much more a taboo. Today, this is changing.

The most accepted form of racism today in many European countries is anti-Muslim racism. While many other European right-wing parties have to provide concrete evidence for their abandonment of Nazism and anti-Semitism due to strict laws, they wholeheartedly embrace Islamophobia as a less contested form of racism. Theoretically, new party formations such as the AfD would have it easier in terms of distancing itself from anti-Semitism and Nazism. It is not directly connected to personalities from the Nazi regime, like it was the case with the Austrian Freedom Party. But in reality, the opposite is true. Some of AfD’s leading party members fully supported the anti-immigrant rallies in Chemnitz in early September that were organized by the extreme right, with Hitler salutes and hounding of people ‘not looking German.’

“With anti-Muslim racism being a central trait of right-wing parties, the AfD introduced a much cruder and aggressive form of Islamophobia, compared to other political parties in Germany. With slogans such as ‘Our country: Our values. Burkas? We love Burkinis!’ that reflect the sexist and racist notion of national identity or ‘Preserve German values: Islam is not part of Germany!’ it made Islamophobia central to its political campaigning.”

For the current elections in Bavaria, the AfD even came up with new Islamophobic slogans such as “Protect Women’s Rights: Schools free of Headscarfs,” thus attacking Muslim women and pupils in line with their goal to ban the hijab. Another slogan reveals the deeply racist attitude that is especially reminiscent for the German audience: “German mainstream culture: Islam-Free Schools!”. This slogan must be seen in connection to the Nazi term ‘Judenfrei’, which means “free of Jews” and points to areas that were ‘cleansed’ of Jews, who were being portrayed as ‘impure’ as well as a ‘pollution,’ finally ending with the annihilation of Jewish people in the Holocaust. It should be noted in this regard that  other right-wing politicians such as the Australian Senate representative Fraser Anning even dare to use an explicit language to speak about a “final solution” regarding Muslims.

This increasingly blatant anti-Muslim discourse also leaves its impression on nominally non-right-wing parties and lowers the inhibition threshold for what  is acceptable to be said in the public realm. A recent example for this is the national MP Veronika Bellmann from German chancellor Angela Merkel’s Christian Democratic Union (CDU). Bellman argued that there was no place for Muslims in her political party, which, in fact, includes prominent figures with Muslim background even in higher positions than Bellman’s. She represents the right-wing faction within her conservative party and is a member of the Berliner Kreis, a circle of mostly right-wing people within the Christian Democratic Union that confirms the narrative of a Judeo-Christian cultural heritage in Germany. While arguing that the circle is against anti-Semitism and Islamophobia, they defend the ban of the hijab for pubic servants and argue that the end goal of a successful integration policy must be assimilation.

But Bellmann even went further than denying space for Muslims in the CDU. According to her, Muslims “today present themselves secular and tomorrow they present themselves strictly religious,” thus reiterating the concept of the ‘eternal Muslim’ that always goes back to an otherized and essentialized religious identity that contradicts with everything that is deemed progressive, such as secularity in this case. For Bellmann, the Muslim figure is deeply anti-German. Hence, she demands from Muslims to “affirm the constitution.” While many high ranking members of her own party harshly criticized this statement, Bellman continued to stay her ground.

What the new-wave racist AfD’s slogan and the establishment Christian Democratic Union MP Bellmann’s discourse share is the same essentialist racist notion of a Muslimness that cannot escape its identity. Just as in racial anti-Semitism the Jewish convert was doubted to hide his real agenda and hence public service had to be free of Jews, today, the AfD wants to start with making schools free of Islam and Bellmann attempts to clean her party from Muslims, making her own Christian Democratic Union a Muslim-free, purely German, purely Christian conservative party.