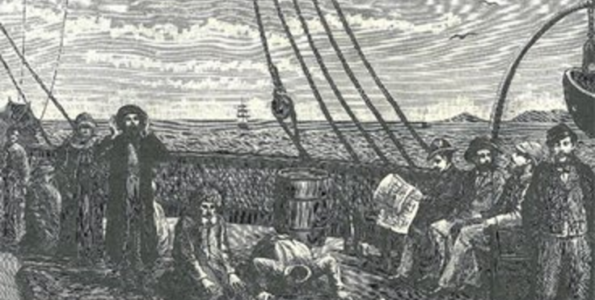 Scott Reese’s Imperial Muslims provides a detailed history of Aden under British rule from 1839-1937. He is concerned with addressing a number of recent debates in Islamic history, oceanic history, and the history of British imperialism. Despite these multiple interventions, Imperial Muslims is primarily focused on the people residing in a single Indian Ocean port. Through a careful reading of both English and Arabic source material, Reese examines how a Muslim community was forged in Aden under British imperial rule. He argues that a study of religious beliefs can reveal how Muslims in the port interacted with one another and understood their place within the empire. Reese treats the British as peripheral to this history and instead focuses on the diverse groups of people, originally from the Middle East, Asia, and Africa, who came to live in Aden during the nineteenth and twentieth centuries.

“Through a careful reading of both English and Arabic source material, Reese examines how a Muslim community was forged in Aden under British imperial rule. He argues that a study of religious beliefs can reveal how Muslims in the port interacted with one another and understood their place within the empire.”

The book opens with an investigation into the connections that had long existed between South Asia and the Arabian Peninsula. By going as far back as the Greek Periplus of the Erythraean Sea from the first century CE, Reese establishes that Aden had been an important pre-modern oceanic center and that its history was deeply connected to India through trade as well as in numerous imagined histories. Starting in the sixteenth century, merchant communities residing in Aden became trapped between competing factions including the Ottomans and Portuguese and the port experienced a marked decline. When the British became concerned with establishing connections in Aden in the nineteenth century, the revival of the port was again linked to India and its possession was envisioned as a necessary ingredient in British commercial power in the Red Sea and beyond. In this chapter, Imperial Muslims continues discussions begun by historians of the Indian Ocean such as Sugata Bose and Thomas Metcalf by also placing the British empire within the Indian Ocean world but Reese moves beyond India and Indians to instead consider how the British empire had been built upon the networks and connections that had long existed within the ocean, including those between the Arabian Peninsula and the Indian subcontinent.

Aden as a Strategic Prize?

Reese also effectively questions long-held beliefs that the British were first interested in Aden as a strategic coaling location. He provides a lengthy account of the wreck of the Daria Dawlat in 1837 to illustrate British perceptions of the need for support within Aden to protect Indian Muslims traveling to the Red Sea. After the British gained control over Aden in 1839, the port became a preferred commercial location for Indian merchant houses, especially following the decline of other Red Sea ports. As new groups arrived in Aden, the older traditions of connection between India and Arabia were reinvigorated and imagined, as the port once again became central to Indian prosperity. Throughout Imperial Muslims, India looms large, not only because it was the locus of British imperial control in the ocean, but also because it was the origin for many of the migrants to the port. As migrants arrived during the 1840s and established residency in the relatively sparsely populated town, the newcomers sought to build connections with one another through their faith, according to Reese. Imperial Muslims investigates their efforts to became permanent residents on the land itself by sponsoring the construction of tombs and mosques, as well as participating in religious activities, particularly ziyaras which were festivals commemorating local and imported saints. Here Reese provides a fascinating reading of British imperial records for Adeni spiritual beliefs, including an investigation into what he refers to as the “unseen metaphysical spaces” in the lives of Aden’s Muslims. Reese also uncovers British attempts to understand and police this growing Muslim community by focusing on the debates that were occurring over who could administer Islamic law. Imperial officials initially allowed non-Europeans police themselves but gradually began to intervene more into the decisions of Qadi through the Court of the Resident and Registrars. Reese reads into these British sources, supplemented with some Arabic documentation, to trace shifting relations between Muslim bureaucrats and traditional religious elites during the nineteenth and into the twentieth centuries.

The Marginalized in Aden

“Unsurprisingly, as a scholar of Islamic Africa, Reese is carefully attuned to the experiences of African marginalized populations who also resided in Aden. These communities rarely enter into the historical record but Reese manages to draw out considerable information from the critiques that were made about the ceremonies of zar and tambura during the 1920s.”

Unsurprisingly, as a scholar of Islamic Africa, Reese is carefully attuned to the experiences of African marginalized populations who also resided in Aden. These communities rarely enter into the historical record but Reese manages to draw out considerable information from the critiques that were made about the ceremonies of zar and tambura during the 1920s. He reveals that attempts to control these practices were not merely about certain groups reestablishing authority over groups who were largely of African-descent, but discussions over these ceremonies were also debates about differing world views. Continuing this theme, the book examines how, at the close of the period, more widespread concerns about reformist Islam were circulating within Aden. The final chapter considers these debates a broader trans-regional context as well as within Aden. Here Reese returns his focus to the discursive traditions of Islam by looking at the rise of local press. He draws upon the work of Nile Green in particular to examine how technological innovations encouraged Adeni Muslims to broadcast their views about Islam within the British Empire.

A “Single and Distinctive Community”?

Despite the strengths of the book, Imperial Muslims ultimately falls short at one key point. In his introduction, he argues that the book will trace the creation of “a single and distinctive community” in Aden (13). Yet the second half of his book grapples with shifting meanings of governmental and religious authority in Aden under British imperial rule. This leaves the reader wondering, given the diversity of inhabitants in British-held Aden in terms of belief, origins, and perspectives on reformist Islam, is it really possible to write of a “single and distinctive community” of Indian Ocean Muslims living within Aden? Particularly when certain groups found their practices (such as zar) being strongly criticized by their neighbors? Ultimately the prevailing picture is one of residents attempting to create a cohesive Muslim community but one subject to constant debates over authority and influence that were exacerbated by their existence as British imperial subjects.

Reese highlights the little-known history of Aden under British rule and his use of British documentation to illustrate Islamic beliefs powerfully demonstrates the possibilities of such research. He also successfully questions established historiography on Aden on a number of key points and reveals the need for additional research. Finally, Imperial Muslims is an important addition to other recent publications that insist on the need to view the British in the Indian Ocean as having to come to terms with the long and powerful history of connections between Asia, the Middle East, and Africa